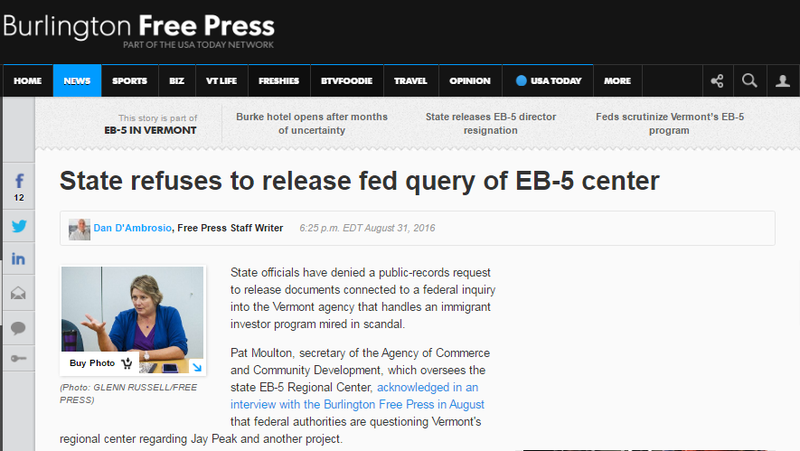 State officials have denied a public-records request to release documents connected to a federal inquiry into the Vermont agency that handles an immigrant investor program mired in scandal.

Pat Moulton, secretary of the Agency of Commerce and Community Development, which oversees the state EB-5 Regional Center, acknowledged in an interview with the Burlington Free Press in August that federal authorities are questioning Vermont's regional center regarding Jay Peak and another project.

The Vermont Regional Center oversees the EB-5 program, which is reeling after allegations of fraud at Jay Peak and other projects in the Northeast Kingdom. The U.S. Securities and Exchange Commission and the Vermont Department of Financial Regulation have accused Jay Peak principals Bill Stenger and Ariel Quiros of misappropriating some $200 million raised from foreign investors for the projects. Quiros is accused of personally pocketing an additional $50 million. They deny wrongdoing.

Under the EB-5 program, foreign nationals who invest $500,000 in development projects in rural or economically depressed regions of the country are eligible to receive green cards if those projects create a specified number of jobs.

U.S. Citizenship and Immigration Services sent a Request for Information regarding the Regional Center in July. The state Commerce Agency had until the end of August to answer the federal agency's questions, Moulton said. The Free Press made a public records request to Moulton for the federal inquiry and the state's answers nearly two weeks ago.

Moulton said she did not believe the Vermont EB-5 Regional Center is in any danger of being terminated.

The state on Wednesday denied the public records request based on the contention that the documents are "relevant to the pending litigation where the state is a party," referring to the alleged fraud in the Northeast Kingdom. The Free Press is challenging the denial.