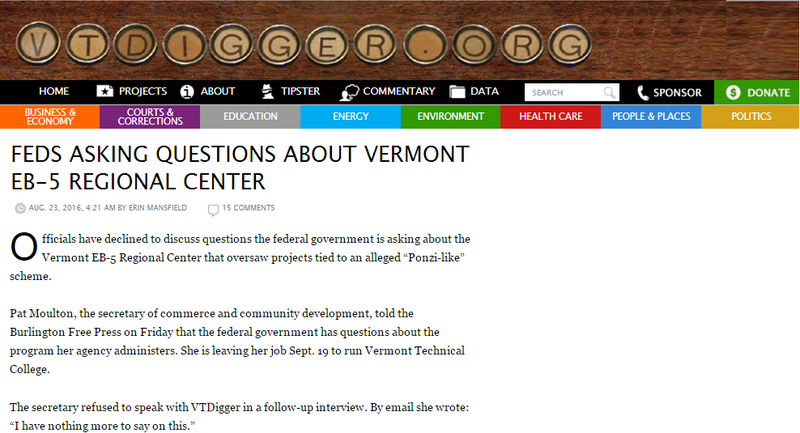 Officials have declined to discuss questions the federal government is asking about the Vermont EB-5 Regional Center that oversaw projects tied to an alleged “Ponzi-like” scheme.

Pat Moulton, the secretary of commerce and community development, told the Burlington Free Press on Friday that the federal government has questions about the program her agency administers. She is leaving her job Sept. 19 to run Vermont Technical College.

The secretary refused to speak with VTDigger in a follow-up interview. By email she wrote: “I have nothing more to say on this.”

Moulton told the Free Press that U.S. Citizenship and Immigration Services has requested information about the Vermont center, one of nearly 850 regional centers across the country that manage the EB-5 program. Immigrant investors can obtain permanent U.S. residency through the program.

The Vermont Regional Center is responsible for overseeing and marketing EB-5 projects, including the projects at Jay Peak which are now at the center of the biggest alleged fraud case in the history of the national immigrant investor program.

In April, the Securities and Exchange Commission accused the Jay Peak developers, Ariel Quiros and Bill Stenger, of misusing $200 million in investor funds in a “Ponzi-like” scheme.

Documents obtained by VTDigger suggest the state ignored warnings from investors and other stakeholders going back as far as 2012 about the use of EB-5 funds. In 2015, the Department of Financial Regulation took over regulation of the EB-5 projects in the wake of fraud allegations. The department, in early 2015, reapproved two projects — AnC Bio Vermont and Burke Hotel — both of which were suspended by the Agency of Commerce and Community Development in 2014.

It is unclear when the federal government started asking questions or what those questions are. VTDigger filed a request under the Vermont Public Records Act seeking more information, but the state says it will not issue a formal response until Sept. 2.

A spokesperson for the U.S. Citizenship and Immigration Services said in a statement: “While we cannot discuss specifics of any case, please know that we are committed to ensuring the integrity of the EB-5 Program.”

The program gives legal permanent residency to foreign nationals in exchange for an investment that creates jobs; the threshold in Vermont is $500,000 in exchange for 10 jobs created. The program is under congressional scrutiny because it is set to expire Sept. 30.

The Vermont Regional Center is one of two state-run centers that remains active. South Dakota’s regional center was terminated July 7, just three months after state prosecutors charged its EB-5 director with taking a cut of money that was “supposed to stay in an account to compensate the state for losses,” according to The Associated Press.

In a July 28 conference call at U.S. Citizenship and Immigration Services’ Miami office, a spokesperson delivered remarks describing the responsibility of regional centers to the integrity of the program, and its intention to terminate regional centers that do not promote economic growth.

The spokesperson, Nick Colucci, said Citizenship and Immigration Services has been working with the FBI, Immigration and Customs Enforcement, and the Securities and Exchange Commission to “vigorously pursue cases of malfeasance.”

Colucci referenced “some cases” where EB-5 funds were used “to purchase houses and cars, gamble in casinos” and in other personal ways, and said that “it is not sufficient to spend (only) some EB-5 funds on a project.”

In an apparent reference to the SEC’s allegations at Jay Peak, he said: “You may have also heard of cases where funds have allegedly been moved between projects without notifying the investors. Sometimes, the improper movement of money can signal the beginnings of a Ponzi-like scheme.”

Colucci said, describing general policy: “We will issue a notice of intent to terminate a regional center if the regional center fails to submit required information or if we believe it no longer serves the purpose of promoting economic growth.”

“It’s clearly within a regional center’s control when it takes actions undermining its investors’ ability to comply with EB-5 requirements, or misappropriates funds, or moves funds without investor concurrence, or fails to monitor a project it sponsors,” the spokesperson said.

Susan Donegan left her job as the commissioner of financial regulation June 30, and one of her former deputies, Michael Piechak, has taken the helm.

Moulton announced her departure last month to become interim president of Vermont Technical College next month. She leaves her job as secretary of the Agency of Commerce and Community Development on Sept. 9.

In May, Moulton told VTDigger that she and Michael Goldberg, the court-appointed receiver for the Jay Peak developers’ properties in the Northeast Kingdom, were unable to obtain a response from U.S. Citizenship and Immigration Services. Moulton and Goldberg asked USCIS to offer an exemption for immigrant investors who are victims of alleged fraud. They also asked USCIS to consider a reconfiguration of job creation at Jay Peak in order to allow immigrants to qualify for green cards.

If the federal agency started deporting investors, she predicted, “It will be the death knell for the program internationally.” She added: “I think they understand if victims get deported through no fault of their own, that’s going to generate negative publicity and it’s a policy decision that will reflect poorly on the program.”

In an interview July 14 about her tenure as secretary, Moulton said she had “no regrets.” She added: “EB-5 has certainly been a challenge, but I think we’ve done the best we can with the tools we have.”