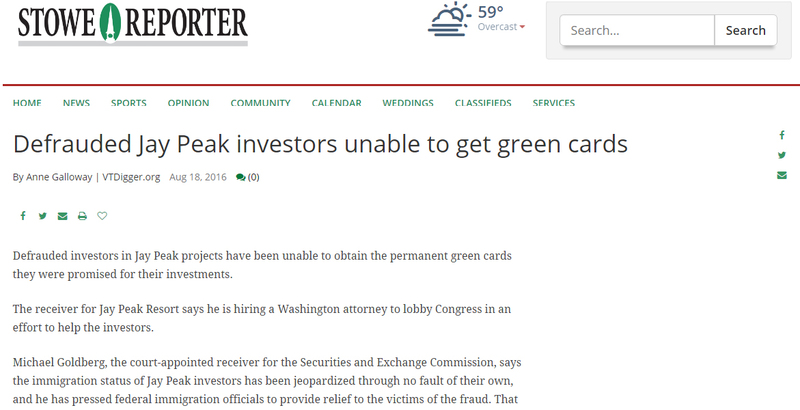 Defrauded investors in Jay Peak projects have been unable to obtain the permanent green cards they were promised for their investments.

The receiver for Jay Peak Resort says he is hiring a Washington attorney to lobby Congress in an effort to help the investors.

Michael Goldberg, the court-appointed receiver for the Securities and Exchange Commission, says the immigration status of Jay Peak investors has been jeopardized through no fault of their own, and he has pressed federal immigration officials to provide relief to the victims of the fraud. That attempt failed.

Now he hopes to make changes in the federal law that would allow the defrauded investors to obtain permanent residency, according to an interim report he filed earlier this month with the Miami federal court. The report was made available to the public last Friday.

The EB-5 program is set to expire at the end of September and, while several members of Congress have threatened to eliminate the program, others — including Sen. Patrick Leahy, D-Vt. — have said they want to revamp EB-5 and create more safeguards against fraud.

In the report to the court, the SEC accuses Bill Stenger, the CEO and president of the ski area, and Miami businessman Ariel Quiros of misusing $200 million in EB-5 funds. The developers used $350 million in a “Ponzi-like” scheme that involved seven separate construction projects, not including Burke Hotel.

Miami federal court Judge Darrin Gayles has not yet issued a ruling on the SEC’s request for a preliminary injunction. ‘

The immigration status of 700 investors, Goldberg says, is now in jeopardy because of the alleged fraud perpetrated by the developers of Jay Peak.

About 400 immigrant investors in the Jay Peak projects have conditional visas, but have not yet obtained permanent residency in the United States through the EB-5 visa program.

About 300 investors have already received permanent green cards, but Goldberg says their immigration status could be in jeopardy. The U.S. Customs and Immigration Service can, for up to five years from the date a permanent green card is issued to EB-5 investors, revoke permanent residency. Goldberg says correspondence from Customs indicates the feds are questioning the improper transfer of money among the Jay Peak entities and whether investors’ investments have resulted in the requisite job creation.

At the time the Jay Peak ski area and related companies were seized by the SEC on April 12, the Stateside condo project was incomplete and a proposed biomedical facility in Newport was deemed by the federal regulators to be “nearly a complete fraud.”

As a result of the alleged fraud, hundreds of jobs that were to be created through the construction of Stateside and AnC Bio may not materialize and the immigration status of investors in the Jay Peak projects is in limbo.

Goldberg had hoped to talk with the U.S. Customs and Immigration Service about using an exemption in the law for extraordinary circumstances to provide relief to investors, but the federal agency was “unresponsive.”

Goldberg and the Vermont Regional Center also attempted to show job creation from other projects could be counted toward the Stateside and AnC Bio projects.

The receiver says his only option now is to pursue a change in federal law. In the interim report filed with the Miami court, Goldberg also suggests he may hire an immigration attorney to sue the federal government on behalf of investors.

In the first few months of the receivership, Goldberg reports to the court that he has focused on securing and maintaining the properties held by the receivership, including Jay Peak, Burke Mountain, AnC Bio, a razed block in Newport, and a project at the Newport Airport. He has traced the use of immigrant investor funds and responded to inquiries from investors and creditors.

In the interim report, Goldberg says that less than a week after he was appointed by the court to take over Jay Peak and related companies, he discovered that Quiros and Stenger had “unlawfully pledged, transferred and commingled” investor money in Q Burke with other entities.

A hotel under construction at Burke could not be completed because of funding shortfalls — even though Quiros and Stenger had collected funds from immigrant investors for the Burke Hotel, Goldberg writes.

In all, Stenger and Quiros raised $60.5 million from 121 investors; it cost $66 million to build the hotel and conference center.

The Vermont Department of Financial Regulation instituted financial controls in the spring of 2015 that prevented Quiros from transferring money from other partnership accounts to pay for construction of the hotel.

“It is believed that the institution of the controls prevented Quiros from illegally diverting money from AnC Bio and other partnerships into the Q Burke partnership,” Goldberg writes.

“Thus, Quiros was no longer able to steal the funds necessary to pay all of the contractors who built the Q Burke Hotel.”

About $3.6 million is still owed to contractors who built the hotel. Goldberg says he hopes to pay the contractors when he can, but certainly when Q Burke is sold.