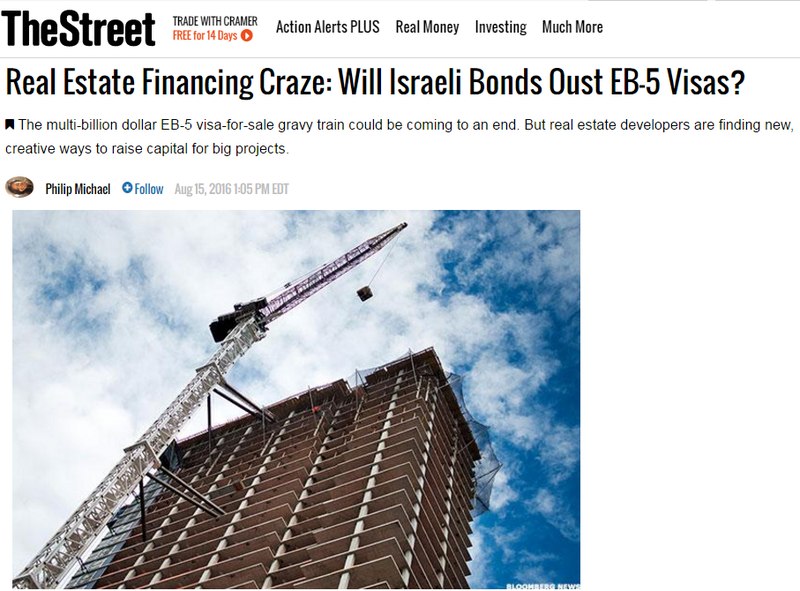 Naturally, EB-5, an investment program allowing foreigners to essentially buy green cards in exchange for a $500,000 investment, along with the creation of 10 U.S. jobs, became a goldmine for real estate developers, with everyone from the World Trade Center's Silverstein Properties to Extell Development  taking a hit of the crack cocaine of real estate financing. (Seriously. Insiders really call it that.)

Interestingly, the development coincided with the Chinese invasion of capital to the U.S. In recent years, Chinese investors have picked up iconic trophy assets at record prices with little-to-no regard for short-term yield.

Despite its popularity, EB-5 financing could be seeing a slowdown amid concerns of fraud, not to mention rumors of Congress shutting it down next month. This is forcing developers to look elsewhere for cheap capital, namely Israeli bonds.

"With all the uncertainties surrounding EB-5 and banks tightening, I see it hitting $3 billion in the next six to nine months," said Joe Berko, chief executive of Berko & Associates, a brokerage and advisory firm that guides Israeli bond transactions.

Berko & Associates holds an exclusive partnership with the main bond underwriter in Israel, which co-managed an all-star list of issuances, including Moinian's record-setting $361 million raise (at 4.2%, one of the lowest rates ever) and Related Cos. ($220 million), the developer behind New York's $20 billion Hudson Yards project.

"In the U.S., [limited liability companies] tend to use mezzanine loans, which carry 12% rates or higher," Berko said. "Israeli bonds generally go in the low-single digits."

Lightstone, a New York-based developer, recently sold $120 million of 10-year debt at 6.05% in Israel, with proceeds going toward a 700-unit apartment building.

The very first significant deal of its kind went down in 2014, when Abraham Leser, a Brooklyn-based investor, went to Israel and issued publicly traded bonds on the Tel Aviv Stock Exchange leveraged against some of his New York properties, raising $35 million in total.

The very same day, Extell's President and Founder Gary Barnett raised about $300 million, kicking off a boom in the "land of milk and honey" as insiders call it, of low-interest capital.

Since then, developers have raised enormous amounts of capital at 4% to 6% rates in a short amount of time, featuring a who's who of New York players.

Extell, ironically, is also the largest U.S. issuer in Israel, at $450 million total raised for luxury condos in New York, according to The Real Deal.

With access to cheap capital, interest is sky-highm especially among mid-level players.

However, the capital structure is highly complex, which has caused hesitation both inside and out New York, restricting the capital-raising mainly to the Big Apple's luxury market.

So how does it work in practice?

The gist of it is that a U.S.-based real estate owner, who must hold $250 million in assets, puts some of his or her properties in a new corporate entity. Said owner goes to Israel and issues bonds leveraged against said entity and its properties.

Despite still being in its infant stage, Berko said that more and more developers will start going the Israeli route, even if the EB-5 gets renewed next month.

"EB-5 transactions take a year or more to complete. In Israel, issuing the bonds takes just four to five months, and it's very, very easy to raise the money again," Berko said.

"That is very desirable for developers who need capital fast," he said.