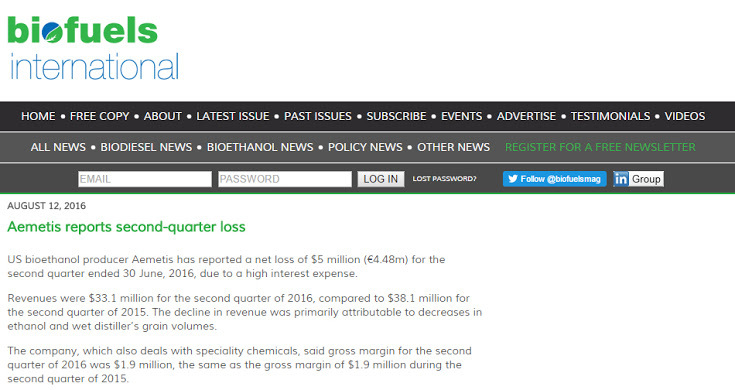 US bioethanol producer Aemetis has reported a net loss of $5 million (€4.48m) for the second quarter ended 30 June, 2016, due to a high interest expense.

In a conference call on Aemetis’ results, chief financial officer Todd Waltz said: “We continue to search for lower cost capital through a combination of debt refinancing as well as escrow releases from the first EB-5 (foreign investment programme) financing.”

Speaking at the same conference, CEO Eric McAfee added: “In Q2, 2016 the pricing of corn ethanol improved by 3% year-over-year. Positive margins were also supported by using the remaining grant money from the California Energy Commission related to the use of milo feedstock.

“During the first six months of 2016, our Keyes plant processed more than 70,000 tonnes of grains sorghum under the CEC alternative feed stock program. During Q3 and Q4 2016, we believe margins will continue to be positive due to the expected large corn drop and a stronger export market for ethanol.

“A primary component of our expenses is interest and feeds on our senior debt. Our biofuel plant in California has created a significant number of jobs, allowing Aemetis to raise debt using the Federal EB-5 programme at only a 3% interest rate with no principal payments for up to five years.”

Providing a second-quarter overview, McAfee added: “Pricing during the quarter improved compared to the same period last year, and gross profit for the first half of 2016 improved significantly over the first half of 2015 based upon favourable pricing on inputs and finished products as well as a grant from the California Energy Commission,”