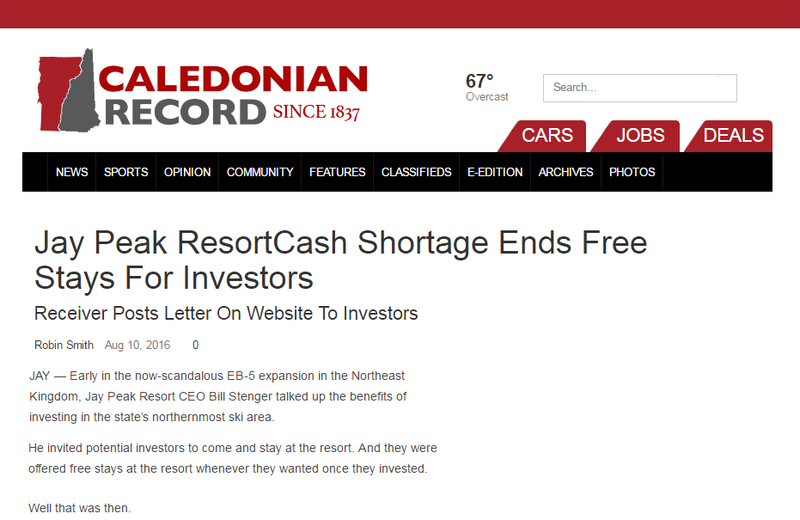 Early in the now-scandalous EB-5 expansion in the Northeast Kingdom, Jay Peak Resort CEO Bill Stenger talked up the benefits of investing in the state’s northernmost ski area.

He invited potential investors to come and stay at the resort. And they were offered free stays at the resort whenever they wanted once they invested.

Well that was then.

Now, Stenger is seeking a settlement of the allegations against him in his role in what federal officials called a massive Ponzi scheme of misusing investments from foreign investors under the EB-5 program to build out Jay Peak Resort and begin the expansion at Burke. His partner Ariel Quiros is also accused of taking more than $50 million.

And the investors are no longer given a free stay, part of the impact of the cost of the federal court take-over of Jay Peak Resort and Burke Mountain from Stenger and Quiros and their companies.

A court-appointed receiver, Michael I. Goldberg, is overseeing the continued operation of the resorts to keep them viable until they can be sold and the investors, creditors and expansion contractors reimbursed.

But the new Burke Hotel isn’t open yet and Goldberg had to invest $5 million into improvements of the tram at Jay Peak Resort. And a poor ski season last winter made cash flow scarce at both resorts.

Goldberg received a loan from a $4.5 million settlement with financial company Raymond James & Associates Inc. to keep the resorts running.

There’s been a shortage of funds to pay the receiver, a Florida attorney, and his team.

So on Aug. 3, Goldberg wrote a letter to the investors, posted on his website, alerting them that their complimentary stays at Jay Peak are a thing of the past.

“Prior to the commencement of the receivership, Jay Peak allowed investors to stay at the hotel for free. Unfortunately, due to our current situation, we are no longer in a position to provide free rooms to investors.

“However, if you are interested in staying at the resort, we will provide you with a 50 percent discount off our published room rates, excluding holidays.”

The investors are encouraged to make arrangements in advance to get their discount.

Goldberg’s mission is to help the investors, many of whom have moved to the U.S. but could face problems with the visa they were promised for their $500,000 investment into Jay Peak or Burke Mountain.