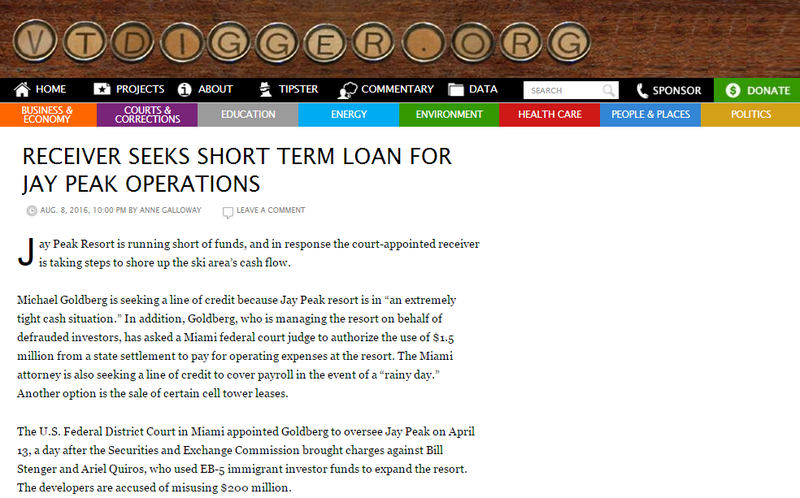 Jay Peak Resort is running short of funds, and in response the court-appointed receiver is taking steps to shore up the ski area’s cash flow.

Michael Goldberg is seeking a line of credit because Jay Peak resort is in “an extremely tight cash situation.” In addition, Goldberg, who is managing the resort on behalf of defrauded investors, has asked a Miami federal court judge to authorize the use of $1.5 million from a state settlement to pay for operating expenses at the resort. The Miami attorney is also seeking a line of credit to cover payroll in the event of a “rainy day.” Another option is the sale of certain cell tower leases.

The U.S. Federal District Court in Miami appointed Goldberg to oversee Jay Peak on April 13, a day after the Securities and Exchange Commission brought charges against Bill Stenger and Ariel Quiros, who used EB-5 immigrant investor funds to expand the resort. The developers are accused of misusing $200 million.

Goldberg said in an interview that the resort typically relies on surplus monies from winter ski receipts to hold the resort over the off-season that runs from May to October. But this year, because of the fraud and lack of snow, Jay Peak didn’t have the $7 million to $8 million in cash it needed to adequately fund operations this summer. In addition, the resort needed $5 million in repairs to the tram, which ferries tourists to the top of Jay Peak.

That double whammy put the resort in a “bad cash situation,” Goldberg said. Nevertheless, the resort had an 11 percent increase in revenue from April to June, kept about 500 people on the payroll and paid bills incurred since April. In addition, Goldberg says he has paid $2.5 million to rehab the tram. State officials shut down the tram in May and then reauthorized tram operations after Jay Peak made repairs. The tram is currently in use.

Goldberg described the short term loan as a “precaution.” He says will only use the money if necessary to meet payroll. The cash-flow situation at the resort has been so tight, Goldberg said he hasn’t had enough money to pay himself or the other lawyers in his firm, Akerman LLP.

The Florida attorney expects to settle in the next week or so with a financial institution. The money from the settlement he said will be used to keep the resort operating through the off-season and some amount may also be available to pay contractors who have placed liens on Jay Peak and Burke Mountain, a sister resort.

“We are focused on stabilizing the resort and getting to the winter season,” Goldberg said.

The money would be used for payroll associated with day-to-day operations. None of the restitution money can be used to pay for administration of the receivership or for the salary of Bill Stenger, the CEO and president of Jay Peak, who was charged with defrauding investors in April. Stenger has continued to work at the resort and earns $100,000 as part of a special arrangement with Goldberg who has said he needs Stenger’s expertise to run the resort efficiently.

Ultimately, Goldberg plans to sell the ski area. In the meantime, he says he is protecting the interests of the investors by ensuring that the resort is operational. Shutting down the resort would “drastically affect the value of the hotel and resort as a going concern,” Goldberg wrote in a filing with the federal court.