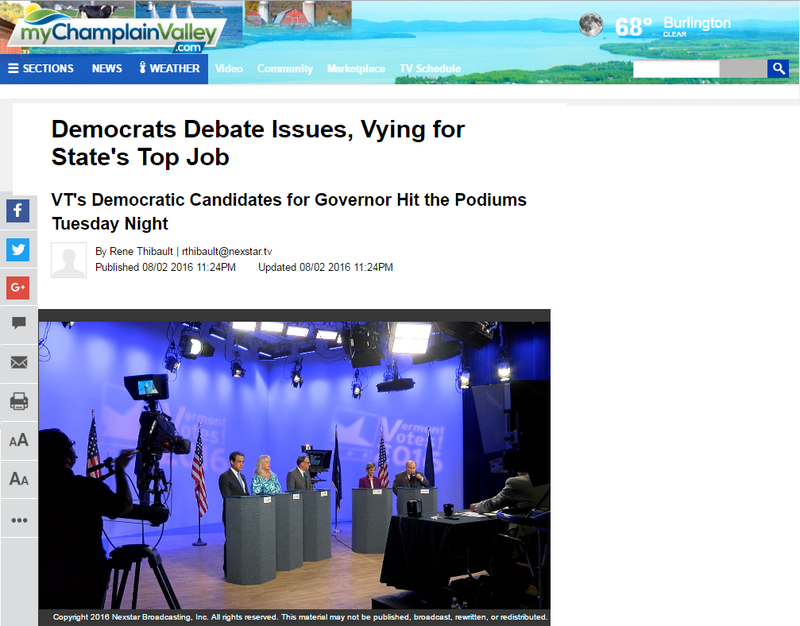 Tuesday night it was the Democratic candidates for Vermont Governor making a final pitch to win your vote in next weeks primary.  Vermont PBS hosted the 2nd of the two debates for the state's top job.

The evening featured quite a diverse group of candidates.  While answering questions, Minter, Galbraith, and Dunne spent much of their response time pointing out a change of view, from one another.  Paige stuck to the issues covered, while Ericson urged Vermonters to go to the US Marijuana Party website to watch her videos.  She claims Democratic Party leadership is excluded her from debates and forums.

Issues ranged from economic development, to act 46 school consolidation.  A hot topic always for Vermont, the state budget.  "There are many parts to our state budget.  I have been someone who's reviewed all of them in the Appropriations Committee and dug deeply into balancing budgets every year as Transportation Secretary," said Sue Minter.  H Brooke Paige stated, "Budgeting is normally taking a look at what's coming in and figuring out what your expenses are and kind of leveling that out.  I think that the State Legislature and the Governor's Office need to learn a lesson from that." "It is so critical that we get on top of the budget in the state of Vermont, because what we're doing is having a huge deficit.  We're cutting front line workers, we're cutting programs the most vulnerable and then we're raising taxes, that happens year after year," countered Matt Dunne.  Peter Galbraith said, "A Galbraith budget will fund essential public services and a Galbraith budget will include funding along with a way to pay for it, to start the process of continuing towards single payer health care." Cris Ericson concluded coverage of the topic stating, "We have a decreasing school population and that's a big issue with the state budget.  As to the decreasing school population, I want to talk about adoption instead of abortion.  Allow low income families to adopt children at lower costs.  It'll help the schools, it'll help the budget."

A hot topic this week, where large scale renewable energy projects could go.  For Galbraith, large scale projects aren't the answer, saying they cause more harm than good.  Minter believes the state needs to reduce it's carbon reliance, but communities need a say in their location.  Dunne says Vermonters have lost faith, and there needs to be a clear message when it comes to climate change fixes.

Another issues covered, Vermont's EB-5 Foreign Investment Program.  That's where we get insight from Ericson, and Paige.  "Some of the investments were very sound.  But certainly the projects up in Newport and the projects up in Burke represent the very worst.  You're building massive projects that are not right sized for the community," said Paige.  Ericson countered with, "Now the EB-5 foreign investment program has incredible potential to do so much good.  We need to focus on the good things about the program.  Democrats are focusing on the bad things, they're not looking at the good things."

The future of Vermont Health Connect was another hotly debated topic.  Candidate Peter Galbraith says it's time to move on, "If it is not fixed by the time I take office, I will scrap it.  Obviously we've spent millions on it and it's not working.  I'd move to either the federal exchange or to a multi-state exchange."  Sue Minter agrees it's time for a change, "We need to get back to the discussion around single-payer health care, universal health care.  I'm excited about the possibility of increasing doctor dinosaur to 26 years of age, or looking to universal primary care."  Matt Dunne says Vermont Health Connect can work for the state, it just needs an overhaul, "The debacle with the health connect website and the back-end operations has damaged trust and has taken us off the road to universal health care that is so important for us to get back on."