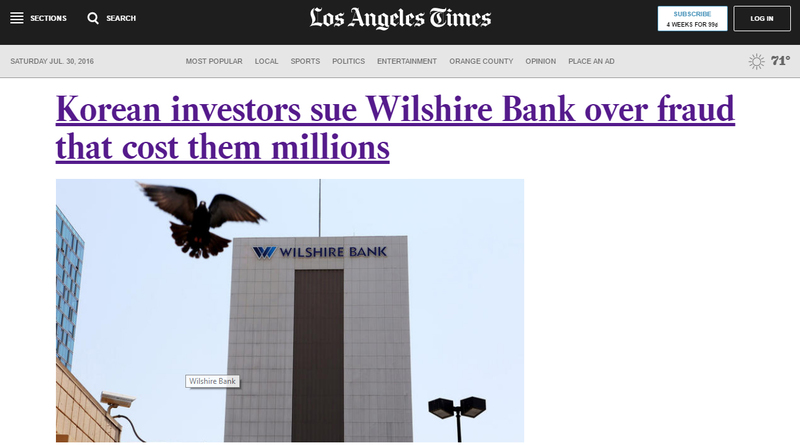 When foreign investors believed that they’d been snookered by an L.A. attorney-turned-money manager, they sued him and his firm, trying to get their money back. When federal authorities thought fraud was afoot, they did the same.

But now a group of those investors are back in court, going after an unusual target: not the man they say bilked them, but the bank where he stored their cash.

A dozen Korean nationals this week sued Wilshire Bank for fraud, negligence and breach of contract, saying the Koreatown bank should have prevented attorney and investment manager Justin Moongyu Lee from ripping them off.

The bank had been on the periphery of legal actions brought against Lee and his associates, mentioned in cases filed by the Department of Justice and the California Bar Assn. But the investors now allege that the bank was complicit in the scam, which involved the EB-5 visa program that gives foreign investors permanent U.S. residency in exchange for investing in projects that create domestic jobs.

The legal action comes at an awkward time for Wilshire Bank, set to complete a merger Friday with rival lender BBCN that is creating the nation’s largest Korean American bank.

The suit, filed in Los Angeles Superior Court, highlights the problems that have tarnished the federal visa program and reflects a growing tendency by investors to hold banks accountable for fraudulent activities, even if they are acting only as intermediaries.

“There’s a trend of looking for responsible parties that maybe aren’t the person who is directly involved, but that in some respects aided their conduct,” said Mark Olthoff, an attorney at law firm Polsinelli, who does not represent any parties in the suit. “The theory is that a bank should have known its customer and should have paid attention when things didn’t go the way they should go.”

The investors allege that Wilshire Bank had a lengthy business relationship with Lee and employed one of his relatives — facts they say should have been disclosed to investors. What’s more, they allege that because of those relationships, the bank permitted Lee to improperly transfer money out of investors’ escrow accounts.

“The purpose of escrow is to put money into a trust-and-protect situation for the people who own the money,” said Browne Greene, one of the plaintiffs’ attorneys. “The bank had a responsibility to protect these people. They didn’t do that.”

In 2006, Lee, an immigration attorney, started soliciting Chinese and Korean investors interested in attaining a visa through the EB-5 program.

Lee told his investors their cash would be used to build biofuel plants in Kansas and Texas, according to court records. But the market for ethanol and other biofuels tanked in 2008, and by 2010 investors who had not yet received their green cards started suing.

In January 2013, the California Bar Assn. filed disciplinary charges against Lee. Later that year, he was arrested in South Korea on suspicion of fraud. In 2014, the Securities and Exchange Commission and Justice Department brought separate cases against him, charging him with civil and criminal fraud. The criminal case has not proceeded because  Lee was convicted in South Korea and is now serving a prison sentence there.

In the cases brought by the SEC, Justice Department and state bar, Lee was accused of misappropriating investors’ money. Instead of putting it into the promised biofuel plants, authorities say Lee used some of the money to pay back earlier investors, to invest in a mining operation in the Philippines and for his own use. The Justice Department said 94 investors in the projects lost a total of $47 million.

The investors suing Wilshire say that the bank should have prevented that misappropriation by safeguarding their escrow accounts.

EB-5 investors have to pass a preliminary check by the U.S. Customs and Immigration Services, showing they are eligible for the program. Under terms of their investment agreements with Lee, each investor sent Lee $500,000, which was supposed to sit in an escrow account at Wilshire Bank until they had passed that initial check.

After the initial approval, investors expected their entire investment to be transferred out of escrow and into the account of a firm run by Lee that would put the money to work.

But attorneys for the plaintiffs say Wilshire allowed Lee to transfer money out those accounts before investors were approved. They say Lee also made numerous transfers of small sums — rather than moving $500,000 chunks as promised — and that some of the money went to overseas accounts, including one in the Philippines that invested in a mining operation there.

That activity, plaintiffs argue, should have looked suspicious to Wilshire.

Wilshire is likely to argue that investors ultimately put their trust in Lee, and the bank had the limited responsibilities of holding on to investors’ money and releasing it upon Lee’s request, said Mark Hiraide at attorney with law firm Mitchell Silberberg & Knupp.

But he said said banks are increasingly expected to act as gatekeepers to the financial system and that, if the plaintiffs can show Wilshire ignored too many warning signs of fraud, it could spell trouble for the bank.

“There have to be enough red flags that it’s tantamount to knowledge or of aiding and abetting fraud,” he said. “At some point, you can’t ignore what appears to be fraud and hide behind contractual limitations of liability.”

The plaintiffs want their money back, plus interest, and will also seek punitive damages against the bank, meaning Wilshire could be on the hook for tens of millions of dollars should the plaintiffs prevail.

The Korean investors are not the only ones to lose their money to a fraud perpetrated through the EB-5 program. Last year alone, the SEC filed fraud charges in five cases involved EB-5 investments, including one against a Redlands doctor accused of misspending millions of dollars that Chinese investors were promised would be used to build a chain of nursing homes.