Jay Peak Was On Vt. Radar 4 Years Ago 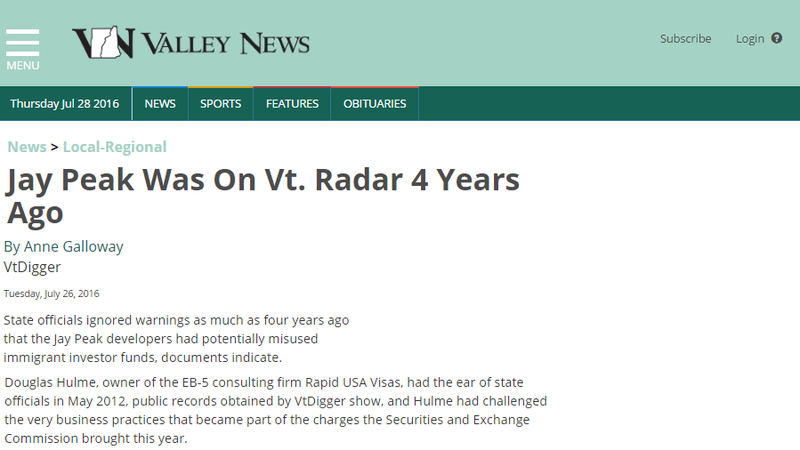 State officials ignored warnings as much as four years ago that the Jay Peak developers had potentially misused immigrant investor funds, documents indicate.

Douglas Hulme, owner of the EB-5 consulting firm Rapid USA Visas, had the ear of state officials in May 2012, public records obtained by VtDigger show, and Hulme had challenged the very business practices that became part of the charges the Securities and Exchange Commission brought this year.

Emails among Hulme, Bill Stenger, who was the CEO and president of Jay Peak, and Lawrence Miller, then secretary of the commerce agency, show officials didn’t act on Hulme’s warnings and instead sought to discredit his company.

It wasn’t until 2015 — three years later — that the state opened an investigation. By that time, federal authorities were already a year deep into their investigation. And it wasn’t until April of this year that state and federal officials charged Stenger and Ariel Quiros with defrauding more than 700 immigrant investors in the EB-5 visa program.

Hulme’s allegations came on the heels of a very public fallout with Stenger. Hulme sent a letter to 100 immigration attorneys on Feb. 28, 2012, warning that he no longer had “confidence in the accuracy of representations made by Jay Peak or in the financial status of and disclosures made by the various limited partnerships at Jay Peak.”

The media quickly picked up the story, and the breakup went viral. In response, James Candido, who was director of the Vermont EB-5 Regional Center at the time, spent a day at Jay Peak and declared in news reports that he found “no issues” with the company’s finances.

Behind the scenes there was a thread of communication between Hulme and Miller over Hulme’s concerns about whether Jay Peak’s finances were in compliance with state and federal laws.

Privately, Candido was working to arrange a telephone conversation between Hulme and Miller. In an email obtained from the state by VtDigger, Candido explained to Hulme that Miller wanted “to discuss in detail the reasons for the departure from the Jay Peak project and (Hulme’s) direct concerns about the project that led to the company’s departure.”

Before the conference call, an attorney for Hulme explained to Candido by email that Rapid USA had concerns about “the expenditure and use of funds by the limited partnerships and reconciliation of accounts, including the transfer of funds.”

The attorney, Eugene Lindsey, had asked Stenger in February 2012 for balance sheets, bank statements and wire transfers, as well as the source and use of funds reports for the Jay Peak projects, according to email correspondence provided by the state. He also specifically asked Stenger to verify that he had not used investor monies to obtain margin loans — one of the SEC’s accusations — and that the developer provide Rapid USA with written assurances from legal counsel that the projects were in compliance with federal and state law. Stenger apparently did not provide the assurances Hulme requested, and on Feb. 28, Rapid USA terminated all business dealings with Jay Peak.

Depositions taken by the SEC of two accountants for Jay Peak show that Hulme was apprised of concerns they had about the way Quiros was using investor funds. One of the accountants alerted Hulme and Stenger in 2009 to bank statements that showed Quiros was using investor funds as collateral for loans. The SEC has said in its lawsuit that $105 million of investor monies was leveraged for speculative margin loans from 2009 to 2012.

Another accountant told the SEC that in 2011 he found the developers were commingling funds and using money from new investors to pay for previous projects.

The scheduled phone meeting among Hulme, Miller and Patricia Moulton, who was then deputy commerce secretary, took place May 4, 2012, email correspondence shows. It is unclear what happened or what was said at the meeting. No meeting notes were released to VtDigger as part of a public records request made in 2015. In October, Vermont Attorney General William Sorrell put state communication regarding Jay Peak on litigation hold, blocking public access.

The next communication after the meeting was between Stenger and Miller.

“James briefed me somewhat on the Hulme call,” Stenger wrote May 17, 2012. “I wanted to ask your perspective on it and if you want anything from me. I have a paper trail on all our interaction. If you would like that or anything else please let me know.”

Miller replied: “I don’t feel a need for any further information at this point Bill. Everyone is fully consistent with each other.”

The secretary has said he didn’t recall details from that time.

Later that month, state officials went after Hulme. Miller said Hulme was no longer authorized to use the state of Vermont logo on the Rapid USA website. (Jay Peak developers, on the other hand, continued to use the logo until the SEC stepped in.) In addition, Miller accused Hulme of marketing an EB-5 project at Mount Snow that had not yet been approved by the state. (Jay Peak marketed an office building in Newport for months without state approval.) In closing, he threatened to notify the Vermont attorney general.