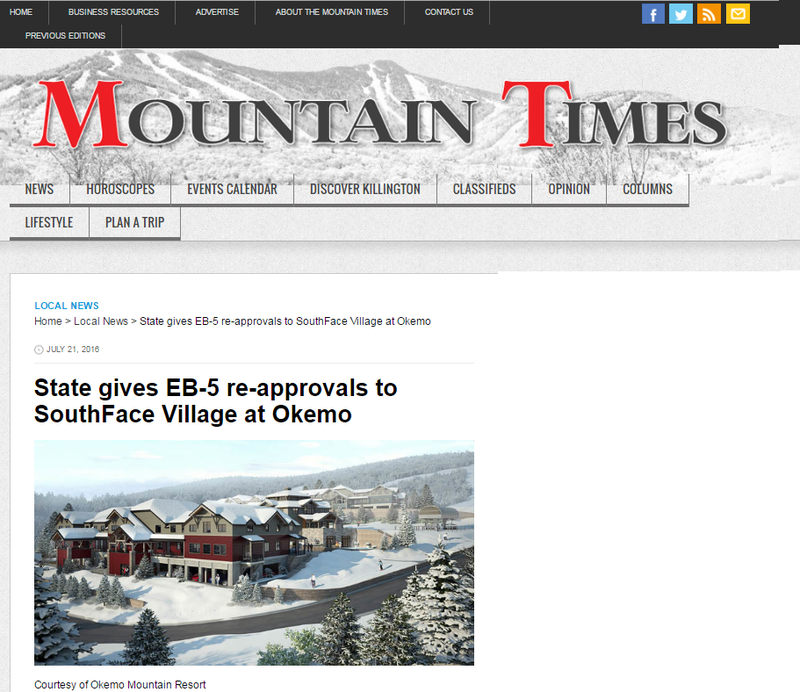 The Department of Financial Regulation (DFR) has given the green light to the continuation of solicitation of EB-5 investors for the SouthFace Village at Okemo project.

The upper-mountain SouthFace Village is the first development of slopeside units at Okemo Mountain since Bixby House was built at Jackson Gore (2006-07).

After receiving original EB-5 approvals from the state in January 2015, the Rossi Group, the developer of SouthFace Village, submitted updates to their offering documents in April 2016. In May DFR requested that the project undergo a regulatory review of its EB-5 offering documentation. (The review is considered a routine event when a Private Placement Memorandum (PPM) — a prospectus that projects are required to provide to investors so they can assess risk — and other documents are updated.)

The Rossi Group submitted the documentation but in late June was told to stop soliciting EB-5 investors pending some further changes related to new regulatory requirements.

Rossi Group CEO Ted Rossi commented in a July 17 press release that this is the “first project in Vermont to undergo this level of DFR review.” He noted, “DFR does not have concerns about the economics of the EB-5 arrangement.”

Vermont Commerce Secretary Patricia Moulton praised the developer for the “willingness to incorporate VRC’s most up-to-date investor protection credit risk standards.” She noted the hold on the solicitation of investors was temporary and part of the updating process. “The SouthFace Village project is in good standing and is in the market actively raising EB-5 capital,” she said.

The project, estimated to cost $200 million, calls for the construction of 221 residences — 122 townhomes, 35 single-family homes and 64 mountain cabins — a lodge, ski trails and two lifts. The first 14 luxury townhomes are slated for occupancy this fall and are sited in the Village Center, close to the Sunshine Quad (built last year by Okemo).

The 14 Sugar Maple townhomes were sold to Okemo loyalists, noted Rossi Group Vice President Andrew Becker.  EB-5 investors do not own any residences. Rather, their $500,000 investment in a VRC approved project leads to permanent residency for their families, provided 10 direct or indirect jobs are created by the project. Investors will be repaid their original investment at the end of a mandatory five-year period but federal rules specifies that the money invested be at risk, Becker said.

Becker, who is general counsel for SouthFace Village as well as an equity owner in the project with Rossi and others, said EB-5 was chosen for a funding mechanism due to banks not being comfortable making loans for infrastructure. Plans call for raising $34 million through 68 EB-5 investors. Project owners have invested capital and there are bank loans (for the buildings) as well, he said.

Becker explained that escrow measures have been tightened to provide an extra layer of protection for investors who might have their I-829 petitions denied (and therefore receive a refund of the investment). These new measures come in the wake of allegations of fraudulent use of almost $200 million of EB-5 investments in several Northeast Kingdom projects.

Douglas Hauer of the law firm of Mintz Levin is advising the Rossi Group on EB-5 regulations and worked with DFR on the extensive and thorough review, Becker said. EB-5 solicitations for the project continue to be handled by the project’s executive team, including Becker.

Presales for the 14 townhomes in the Tamarack building are going well, and Becker expects construction to start in August for fall 2017occupancy.

The Lodge, which will have a restaurant, owners-only amenities, and two penthouses, is slated to be started next year, he said.

EB-5 program: It helps to have friends in high places
January 21, 2020
EB5 Processing Time Updates for the I-526 Petition and I-829 Petition
February 11, 2020
Legislation would ease restrictions on EB-5
January 14, 2020
International Students Should Read About These Major EB-5 Visa Advantages
January 21, 2020
Between Two EB-5 Bills, Only One Offers Real Reform
February 04, 2020
Join Professionals on EB5Projects.com →
Securities Disclaimer