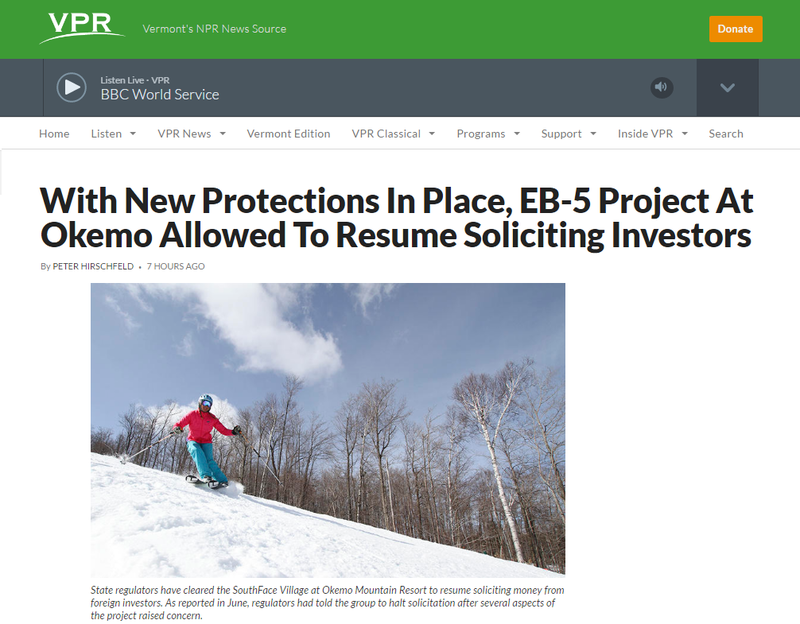 An EB-5, foreign-investor funded project at Okemo Mountain Resort in Ludlow has been cleared to resume soliciting money from immigrant investors, and state regulators say the SouthFace Village at Okemo project has added a number of new investor protections.

The SouthFace Village project is billed as a “four-season luxury home community” at Okemo Mountain Resort, and work on the project is already well underway.

“The ski lift is there, the roads are there, the trails are there,” says Andy Becker, one of the two principal developers behind a $200 million venture that will also feature a lodge and related amenities. “The first building was 100-percent sold and will be complete for closings to the individual buyers at the end of September.”

The EB-5 Immigrant Investor Program is a federal initiative that allows foreign investors to obtain U.S. visas in exchange for a minimum $500,000 investment in a project that yields a certain number of jobs. The Okemo project is one of four active EB-5 projects in Vermont, and when state regulators were conducting their quarterly review of SouthFace earlier this year, they noticed that the project parameters had undergone some changes since early investors had signed on.

“Our concern really was ensuring that the documents that are being presented to investors are updated to accurately reflect the project as it stands today and going forward,” says Michael Pieciak, the commissioner of the Department of Financial Regulation, the government agency entity that has been overseeing EB-5 project financials since late 2014.

As is the custom in securities deals, Pieciak says the department told Okemo to halt solicitation of foreign investors pending regulatory approval of a new project prospectus. Pieciak says Okemo has now delivered that document, and is cleared to resume raising capital.

Doug Hauer, a Boston-based securities lawyer working for the SouthFace Village project, says the project has undergone some other reforms as well.

“The major change that the deal has is that there are increased investor safeguards that go above and beyond what the law requires,” Hauer says.

"The major change that the deal has is that there are increased investor safeguards that go above and beyond what the law requires." — Doug Hauer, a lawyer with the SouthFace Village project

Both Hauer and Pieciak emphasize that the temporary order to halt solicitation of investors – a so-called “quiet period” – was not a punitive measure, or an indication that anything is amiss with the Okemo project.

“What DFR did was ask for clarity on some points, which with regulators is really normal,” Hauer says. Hauer and Pieciak say the enhanced investor protections include more regulatory oversight of expenditures of investor money. Pieciak says there are other regulatory check-ins as well.

“We physically visit the site, make sure that the representations that are made to investors are bearing out in reality,” Pieciak says.

Documents obtained by VPR last month indicated that regulators had raised concerns during their review about several aspects of the project, including its overall profitability, and the viability of a “sinking fund” the project had employed to safeguard investor money.

Pieciak says the SouthFace developers have satisfactorily resolved all of the department’s concerns. Vermont’s EB-5 program came under a national microscope in April, when the Securities and Exchange Commission accused two Vermont developers of using EB-5 projects in the Northeast Kingdom to orchestrate a “Ponzi-like” fraud on foreign investors.

Pieciak says there’s no reason to believe anything is amiss at the SouthFace Village at Okemo project. And project developers at Okemo say their work with state regulators in Vermont could set a new benchmark for investor protection in the EB-5 program.

"[Regulators] worked on weekends, they worked late. It was very much a cooperative effort and everybody pitched in to come up with a good result." — Andy Becker, SouthFace Village project developer

Becker lives in central Connecticut and says he and his partner in the project, Ted Rossi, have been visiting Ludlow for decades to ski at Okemo. When a piece of land adjacent to the resort came up for sale in 2004, the real estate developers purchased the property and began drafting a plan for what would become the SouthFace project.

“So over a number of years we skied, and it was Okemo Mountain in Ludlow,” Becker says. “So we liked Okemo, we knew Ludlow, we knew the area.”

Becker says the EB-5 program offered a route to financing that the project would need to become a reality. He says the project includes a connector ski lift that provides residents of the SouthFace Village luxury condominiums with quick access to Okemo Mountain Resort.

Becker says he welcomes the regulatory scrutiny by the state.

“They worked on weekends, they worked late,” Becker says of state regulators. “It was very much a cooperative effort and everybody pitched in to come up with a good result.”