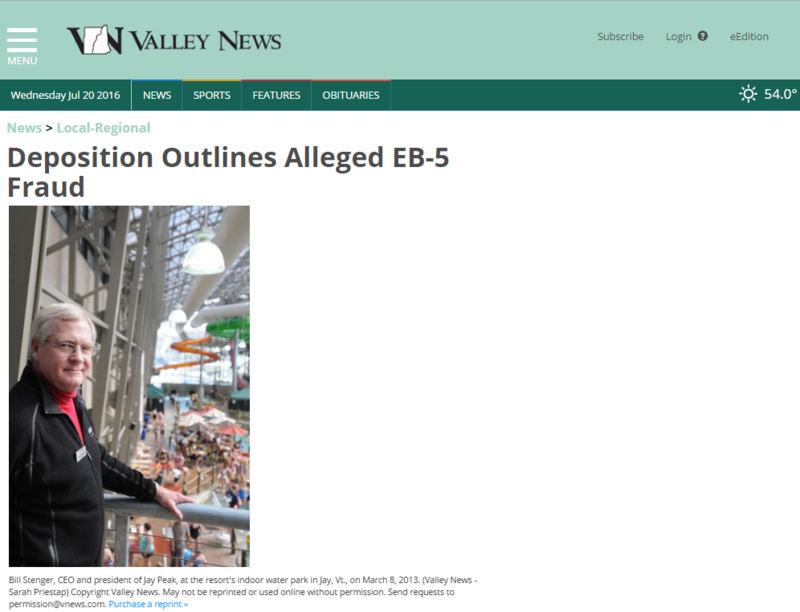 The CEO and president of Jay Peak Resort is expected to reach a settlement with the Securities and Exchange Commission in the next few weeks, according to court filings.

If Bill Stenger strikes a deal with federal regulators, the focus of the legal action in state and federal courts will shift away from his role in the EB-5 immigrant investor scandal and toward the alleged fraudulent activities of his partner, Miami businessman Ariel Quiros.

Much of what has been brought to light in the public record at the U.S. District Court in Miami has focused on accusations by the SEC against Quiros. That’s because the Miami businessman is fighting the SEC’s allegations.

Stenger, on the other hand, has been cooperating with the SEC, and his involvement in the alleged fraud has not been fully divulged.

He has largely avoided the spotlight in federal district court as SEC litigators brought their case — in filings and at hearings — about the alleged misuse of EB-5 money in six development projects at Jay Peak Resort and a proposed biomedical center in Newport, Vt.

The EB-5 program allows foreigners to become permanent U.S. residents by investing hundreds of thousands of dollars in qualifying developments.

As general partner for the limited partnerships with immigrant investors, Stenger had a fiduciary duty to protect their interests, but a deposition with the SEC shows the Jay Peak CEO was directly involved in actions that put EB-5 funds at risk.

The fraud allegedly began when Quiros purchased Jay Peak resort in June 2008 using investor funds. A week after the closing, Stenger wired money from an investor account to Q Resorts, a Quiros company, despite requirements that the funds be held in escrow, documents show. Stenger was also aware, according to his testimony with the SEC, that his business partner leveraged tens of millions of dollars in margin loans against investor funds.

Stenger and Quiros have been accused of defrauding 700 investors from 74 countries and misusing $200 million of the $350 million invested. Quiros has also been charged with stealing $55 million that was supposed to be used for the development of Jay Peak and AnC Bio Vermont, a biomedical facility that the SEC has deemed “nearly a complete fraud.”

A state lawsuit against the two Jay Peak developers says Quiros “masterminded” the scheme “with substantial assistance from Stenger.” Stenger was a front man who sold foreign investors on Jay Peak.

Investor money flowed through 100 bank accounts and 26 entities, the state alleges. Stenger collected money from immigrant investors and transferred it to Quiros, who invested the money in Treasury bills and then took out margin loans against the accounts, according to the SEC. From 2009 to 2012, Quiros used more than $100 million as collateral for loans, the SEC says.

The investors, meanwhile, believed their money was held in escrow, and Stenger never made them aware of the financial transactions. All the while, Stenger continued to make “materially false statements,” the SEC says, to attract new investors to the projects right up until the SEC brought charges. Stenger and Quiros have been charged with 52 counts of fraud in the SEC case and 15 counts in the state case.

The SEC allegations detail how Quiros, who was supposed to used his own money, instead relied on money from early investors for the purchase of Jay Peak.

That early money actually was supposed to be used for the construction of Hotel Jay and the Tram Haus. Instead, Quiros and Stenger allegedly used money from later investors to build the two hotels, and over a six-year period finished five out of seven projects in what the SEC termed a “Ponzi-like” scheme.

The Miami businessman told the SEC that when Stenger found out how he financed the Jay Peak purchase, he “went crazy.” But Quiros also said repeatedly that Stenger was aware of the details of what he was doing with the investor funds. He said Stenger regularly initiated or approved financial transfers of investor funds to Quiros’ myriad accounts, which all served as collateral for loans and his main account.

Stenger has also said he is “confident” he will be “cleared of wrongdoing.” He began cooperating with the SEC when the feds brought charges in April.

Over the past few months, Stenger has continued to be a fixture at the resort. He shows up to work each day, lives in a condo at the ski area and continues to drive his signature company car, an Audi.