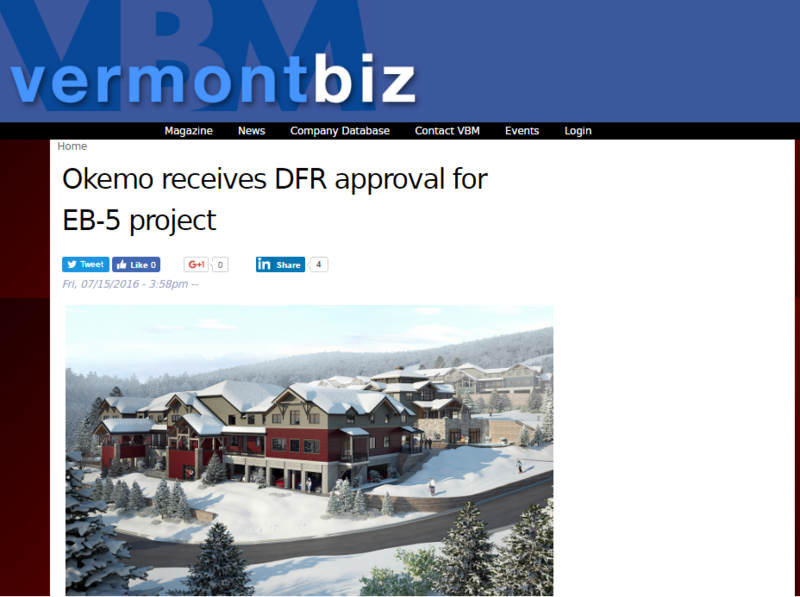 SouthFace Village at Okemo, an EB-5 project in Vermont, has been working closely with the Vermont Department of Financial Regulation (DFR) to secure the agency’s re-approval of its EB-5 offering.  After a rigorous review process, DFR approved the EB-5 project’s updated Private Placement Memo (PPM). The project is the first year-round development at Okemo Mountain in a decade.  DFR requested that the SouthFace project undergo a regulatory review of its EB-5 offering documentation in May.  Such a review is a routine event when a PPM and other documents are updated.

“DFR does not have concerns about the economics of the EB-5 arrangement,” said Ted Rossi, CEO of the Rossi Group and a partner in the SouthFace project.  “They told us that they did not have any issues on that front.”

“The Vermont Regional Center (VRC) values its unique partnership with SouthFace Village at Okemo, especially its willingness to incorporate VRC’s most up-to-date investor protection credit risk standards,” said Patricia Moulton, Secretary of the Agency of Commerce and Community Development.  “The temporary hold on the solicitation of investors while updating the PPM and other documents is not uncommon and is an ordinary requirement of our process. The SouthFace Village project is in good standing, and is in the market actively raising EB-5 capital.”

Rossi and his partner Andrew Becker, who serves as General Counsel of SouthFace Village, were committed to addressing all issues raised by DFR immediately.  They had already made modifications to the offering documents submitted to DFR in April.  DFR required only minor changes to their EB-5 offering documents.

Rossi added, “We are on track, as we expected, with a sign-off from DFR. We are the first project in Vermont to undergo this level of DFR review.”

“Construction and sales at the project site are going well, with buyers planning to occupy units this fall,” said Becker. “We are on schedule to deliver the first building to the new owners for this ski season.”

“DFR needed a chance to do its job,” stated Douglas Hauer, Chair of Mintz Levin’s EB-5 Financing Practice. “Now that DFR has completed its extensive and thorough review, the project has a green light from the state of Vermont to solicit investors.”