The Truth of the Matter: Time to close the EB-5 program 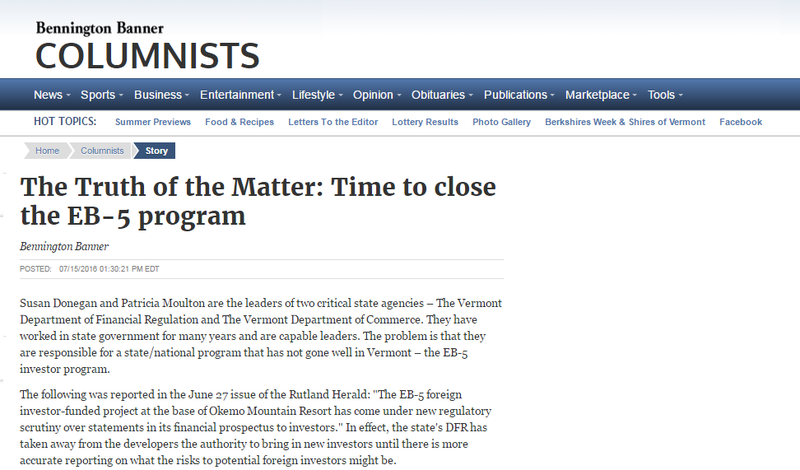 Susan Donegan and Patricia Moulton are the leaders of two critical state agencies – The Vermont Department of Financial Regulation and The Vermont Department of Commerce. They have worked in state government for many years and are capable leaders. The problem is that they are responsible for a state/national program that has not gone well in Vermont – the EB-5 investor program.

The following was reported in the June 27 issue of the Rutland Herald: "The EB-5 foreign investor-funded project at the base of Okemo Mountain Resort has come under new regulatory scrutiny over statements in its financial prospectus to investors." In effect, the state's DFR has taken away from the developers the authority to bring in new investors until there is more accurate reporting on what the risks to potential foreign investors might be.

The EB-5 program is a federal program that was adopted several decades ago to attract foreign investment for U.S-based projects. To recap, if a foreign investor invested $500,000 or more (over and above the $50,000 application fee) in an approved project, the investor would – in addition to a return on his/her investment – gain a green card, which is a pass to stay in the U.S.. Another contingency is that the project must create 10 permanent jobs.

The current hold put on the Okemo project pales next to what has taken place in the NEK. Specifically, at the Jay Peak Resort, E Burke, and in downtown Newport. An EB-5 financial fraud has been alleged to have occurred.

Vermont has never seen an EB-5 fraud the size of what Ariel Quiros and Bill Stanger, the developers of the NEK projects, have been accused of by the SEC and the Vermont DFR – diverting $200 million in foreign investor funds. And if the additional allegations against Quiros are proven, we may find out more on what he did with an additional $50 million he has been accused of taking for personal use.

Prior to 2014, the Vermont Department of Commerce had the responsibility of promoting the EB-5 program. Its representatives (including several governors) went to the far ends of the globe to sell the merits of investing in Vermont under the EB-5 program. Close to one thousand investors did. They were convinced that their investments would be safe – at least, that is what they were told. The same agency that was promoting the investments was also to monitor the projects' financial affairs.

What was the thinking in Montpelier prior to 2014? Were state officials so desperate to bring in foreign investments to depressed areas that they would purposely ignore the oversight that was going to be required? The SEC has been in business since 1933 and it still has a difficult time monitoring the shenanigans that are ever present in the investment world. However, it has never been engaged in promoting investments. Were state leaders that arrogant to think that an agency doing the promotion could also be the watchdog? We found out in 2014 what can occur when there is little or no oversight.

The DFR did not uncover the fraud at the NEK projects; the SEC did. That notwithstanding, the DFR, since it took over the oversight role, has done an outstanding job in detailing what transpired. It recently (under new leadership, Michael Pieciak assumed the role of commissioner as of July 1st) assessed a fine of nearly $6 million on the investment house that contributed to the Ponzi-like scheme that had taken place.

But DFR has other responsibilities that are much broader in scope than EB-5 and the agency shouldn't be asked to devote so much of its limited resources to the EB-5. For the time being, the program should be shut down. We don't need any more scandals or having foreign investors buy their way into the U.S. by accommodating our state's desperate need for capital in underserved areas.