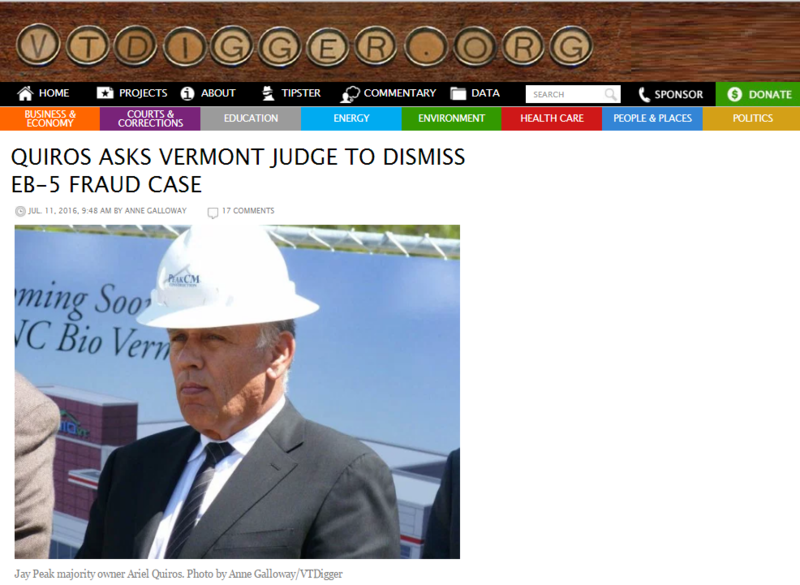 The Miami businessman who is accused of defrauding 700 EB-5 immigrant investors at a ski resort in the Northeast Kingdom is asking a Washington County Superior Court judge to dismiss allegations made by state regulators.

The Vermont Department of Financial Regulation has brought 15 charges of securities violations against Ariel Quiros, the owner of Jay Peak Resort, and his partner, Bill Stenger, the CEO and president of the ski area.

The state, in the amended complaint, is seeking $375,000 in civil penalties and costs for prosecution and investigation of the case.

Quiros has been accused by the Securities and Exchange Commission of stealing more than $55 million from investors. The SEC alleges that he and Stenger misused $200 million in EB-5 immigrant investor funds in a “Ponzi-like scheme.” Quiros has asked the federal court in Miami to dismiss the case. The alleged fraud is also subject of an FBI investigation.

Quiros is also fighting the case in superior court. Stenger, meanwhile, has asked for more time to respond to the state allegations and is likely to settle soon with the SEC. Quiros is represented by Dinse, Knapp & McAndrew, while the extension for Stenger was signed by Scott Kline, an assistant attorney general. Washington Superior Court Judge Thomas Tomasi on Friday granted Stenger’s request for an extension until Aug. 3.

Ritchie Berger, Quiros’ defense attorney, argues that the state has “grossly overreached” and fails to “allege actionable fraud in connection with the sale of any security”; that the state has filed the claim under the consumer protection act, which doesn’t govern securities transactions; and that the claims regarding Quiros’ purchase of Jay Peak Resort in June 2008 using investor money are “time-barred.”

Berger says the state “unveiled this lawsuit amidst great fanfare,” and alleged it was a significant securities enforcement case. But the lawsuit, he says, is ultimately a “misguided enforcement action.”

“While the State’s characterization of the litigation may have made good sound bites in the news, the actual allegations of the Complaint tell a very different and less sensational story,” Berger writes.

Quiros’ defense attorney says five of the seven projects promised by the developers were completely constructed and the remaining two were under construction. The state’s “primary accusation,” Berger writes, is that Quiros failed to use investor funds the way as stated by the private placement memoranda for each project, and yet the projects were, for the most part, built.

The state’s allegations are the “stuff of everyday private commercial disputes: broken promises and misuse of partnership funds,” Berger says, and “fall far short of making out securities fraud.” He describes the investors as “wealthy enough” to invest $500,000 in an EB-5 project “and are all entirely capable of enforcing their own rights against Quiros and the other defendants.” Berger points to class action lawsuits that have already been filed on behalf of investors.

Berger argues that the alleged misrepresentations made to early Jay Peak investors in the Tram Haus and Hotel Jay in 2006 and 2007 can’t be pinned on Quiros because he didn’t own the resort until 2008.

Deceptive conduct, or a misrepresentation or omission of factual information in connection with the sale of a security, is central to any securities fraud claim, Berger writes. The state, however, in this case, he says, targeted conduct that allegedly occurred after the securities were sold.

The SEC and the state have alleged that Quiros purchased the Jay Peak Resort on June 23, 2008, using money from immigrant investors that was supposed to be held in escrow for the construction of the two hotels. Subsequently, Quiros and Stenger had to acquire more investor funds to backfill the projects, the SEC alleges, setting up a “Ponzi-like” scenario in which the developers were taking money from investors in later projects to pay for earlier ones.

Quiros also allegedly leveraged more than $100 million in investor funds in margin loans through Raymond James Financial Inc. The company reached a $5.95 million settlement with the state on June 29.

Stenger was the front man for the operation. He solicited investors, distributed marketing materials and oversaw the drafting of the agreements with investors, known as private placement memoranda, for how the projects were to be paid for and built and ultimately how the resort would pay back investors.

Berger alleges that Stenger had “ultimate responsibility” for the private placement memoranda; Quiros, on the other hand, “reviewed” and “was familiar” with the contents of the agreements and “approved” certain portions of them. Therefore, Berger says, Quiros cannot be held accountable for alleged omissions and misrepresentations made to investors in the limited partnership agreements.

The fact that “the developers made specific representations as to how the partnership funds were going to be managed and used,” and Quiros and Stenger “subsequently deviated” from those representations does not constitute securities fraud, Berger says.

While the representations Quiros made may have been false at the time, Berger says, the law is “well settled that false representations or broken promises” that could affect the future are not the basis of “actionable fraud.” The state has not proven, he said, that Quiros made promises and “had no intention of keeping them.”

Berger points to the completion of five of the seven projects as proof that there is “no factual allegation of an intent to misuse funds.”