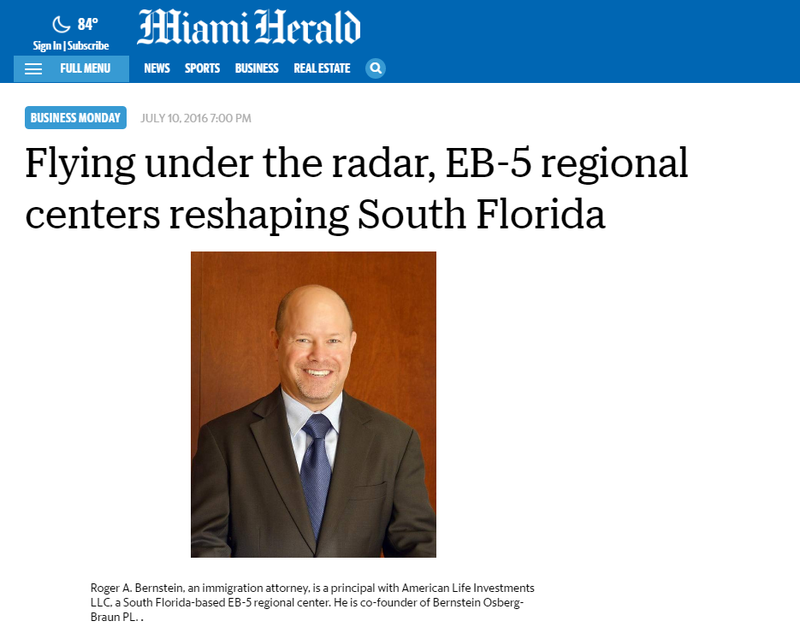 The EB-5 investor visa program is increasingly becoming an important financing mechanism that is not only helping redefine Miami’s skyline but also helping South Florida become a culinary and craft beer destination. That’s why it is important to understand the role of those responsible for creating EB-5 investment opportunities in cities across the U.S., and especially in our region.

EB-5 regional centers, which are vetted and approved by the U.S. government, serve as the conduits of foreign investment and can be privately or publicly owned. A key function of regional centers is to oversee the financing of projects qualified to receive EB-5 capital. The funds are raised in $500,000 increments from foreign investors. In exchange, the investor and his family obtain conditional residency and a path to U.S. citizenship. Regional centers typically assist in the development and construction of projects that create a determined number of jobs. Job creation is at the heart of the EB-5 investor visa program.

Regional centers in South Florida — which are regulated by the U.S. Citizenship and Immigration Service — are increasingly becoming an important contributor to Miami’s economic development. Case in point, Tap 42 Craft Beer & Kitchen was able to open two new locations in Coral Gables and Boca Raton in the last six months thanks to an EB-5 loan. The expansion injected millions of dollars into the local economy by creating jobs, reactivating a vacant retail space, buying more products from its vendors and hiring professional services. More important, it added more depth to Miami’s reputation as a rising culinary destination.

At the same time, regional centers are helping build cultural bridges with other countries, including China. Nearly 85 percent of the EB-5 immigration visas granted every year in the U.S. are allocated to Chinese investors.

Unlike in past cycles, South Florida developers have turned their attention to China not just to look for buyers but, more important, to look for EB-5 investors. Because of the popularity of the EB-5 program in China, Miami has gained great exposure in this critical market. Regional Centers work closely with EB-5 developers promoting their development and raising capital from wealthy Chinese investors. The direct foreign investment is increasingly making a difference in our community. As the owner of a regional center in South Florida, American Life Investments LLC, I see first-hand the evolution of this trend.

For example, American Life Investments LLC is sponsoring a mixed-use development in the Brickell area that is promising to create close to 10,000 direct and indirect jobs in Miami-Dade County. The project will inject close to $1 billion into our local economy. Known as CCCC Miami Towers, the project would raise up to $350 million in EB-5 funds from mostly Chinese investors. Many of them may choose to settle in Miami, helping enrich our city's diverse population. Miami is already beginning to see an influx of Chinese capital. For example, CCCC Miami Towers is being planned by Chinese China City Construction Holding Group and American Da Tang Group.

Some small businesses, like Tap 42, depend greatly on regional centers to secure financing with terms that agree with their business plan. Tap 42, a popular gastropub in Fort Lauderdale, joined forces with American Life Investments LLC last year to raise $4.5 million in EB-5 funds. In less than five months, Tap 42 raised the capital. We recently launched a new offering to raise up to $10 million in new EB-5 capital to open four more locations across the region. The six new Tap 42 locations are projected to create close to 1,000 direct and indirect jobs.

Statistics show regional centers are in fact engines of economic development in Florida and throughout the U.S. In 2013, Florida saw EB-5 capital investment jump to $150.5 million up from $10.5 million in fiscal year 2010-’11, according to the most recent data collected by Invest In USA, a trade organization. That statistic has significantly gone up in the last three years. Currently, Florida is ranked No. 3 in terms of EB-5 capital investment, up from being No. 11 less than five years ago, behind California and New York. At a national level, more than $13 billion of foreign direct investment has been injected into the U.S. economy since 2008 as a result of the EB-5 program. More than $9 billions have been contributed to the U.S. GDP from FY2010-FY2013 and more than 29,000 jobs are supported annually by this program across U.S. communities.

In addition to promoting economic development, regional centers ensure EB-5 projects are in compliance with all applicable federal regulations and program rules to protect investors. For example, an important rule is that the project creates at least 10 jobs per investor. As a result, regional centers carefully monitor the requisite job creation numbers to assure that the process will be successfully completed. Regional centers also assist foreign investors by providing information with respect to the processing of the I-526 Petition and the issuance of the I-829 Petition approvals, which are required to obtain the permanent residency status.

While the EB-5 visa program brings a lot of value to regions like South Florida, it still has to overcome some objections from members of Congress. The EB-5 program is up for renewal in September. The proposed bill to extend the program — called the Integrity Act — would increase the investment amount and make it more difficult for urban areas to develop EB-5 projects. On the other hand, the EB-5 community is extremely supportive of new rules that will increase accountability and ensure EB-5 investors’ funds are even more protected.

Congress has a significant responsibility to ensure the future integrity and effectiveness of the EB-5 investor visa. We urge Congress to make the EB-5 program permanent.