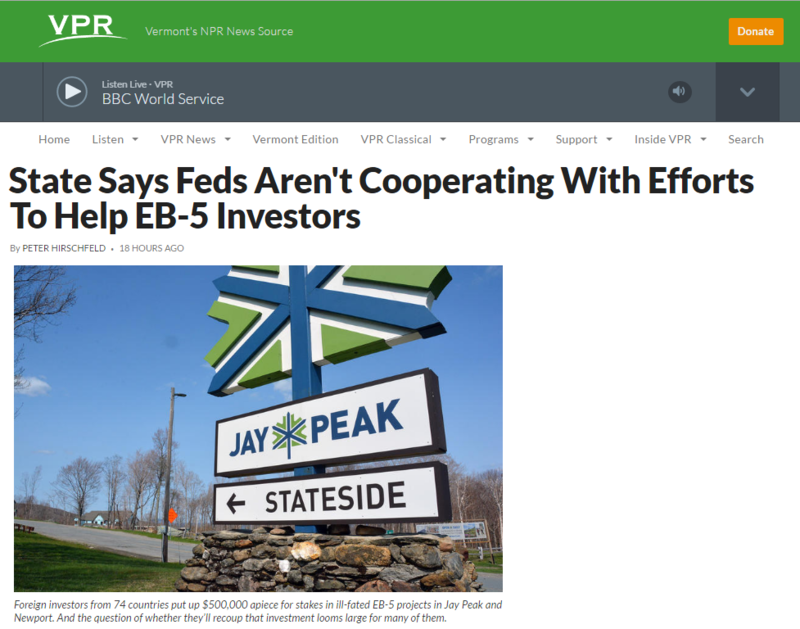 State officials are scrambling to secure legal residency for the foreign investors caught up in one of the biggest alleged frauds in Vermont history. But they say federal immigration authorities aren’t cooperating.

Foreign investors from 74 countries put up $500,000 apiece for stakes in ill-fated EB-5 projects in Jay Peak and Newport. The question of whether they’ll recoup that investment looms large for many of them.

“But there are some who their primary interest is the green card,” says Pat Moulton, secretary of the Agency of Commerce and Community Development.

Moulton says the state is working hard to make sure they get that card from the government that shows their legal status.

The EB-5 Immigrant Investor Program offers green cards to foreigners who can prove that their investments yielded a minimum number of U.S. jobs. That’s going to be a tough benchmark to meet for investors whose money was swallowed up by what federal authorities say was a “Ponzi-like” scheme orchestrated by Jay Peak owner Ariel Quiros and his CEO, Bill Stenger.

Moulton, however, says all is not lost. And she says the state is looking at some creative job-creation accounting mechanisms that might salvage green cards for fleeced investors.

But when the state reached out to U.S. Citizenship and Immigration Services for guidance, Moulton says they got a form-letter response.

“It … wasn’t at all the response we were looking for. We requested a face-to-face meeting, we laid out some ideas and expected that we might actually get a phone call, and a willingness to explore some of those ideas,” Moulton says.

"Time is getting short, and so all the more reason we want to have a conversation with UISCIS, not go through an email process that takes a month to respond." - Pat Moulton, secretary of the Agency of Commerce and Community Development

The proposals being floated by the state are aimed at helping investors in projects that never got off the ground. One idea is to allow those investors to get credit for jobs created by projects built in the earlier phases of the alleged fraud.

“In this case money is alleged to have disappeared, and we have two very good assets – one a full-blown ski resort at Jay Peak and another a beautiful hotel at Burke,” Moulton says.

But Moulton says investors won’t know how to proceed with their green card petitions until the state receives guidance from customs and immigration officials. And she says USCIS has gone radio silent.

“We can proceed and make decisions, but we would really like to know that that is going to be met favorably by USCIS when these investors apply for their permanent green card,” she says.

Moulton says the situation is urgent.

“Their two-year period to show that the jobs were in fact created is approaching,” Moulton says. “Time is getting short, and so all the more reason we want to have a conversation with UISCIS, not go through an email process that takes a month to respond.”

Having been unable to reach a live person at USCIS, Moulton last week elevated her request to Secretary of Homeland Security Jeh Johnson.

“We felt we had to kick it up a notch,” Moulton says.

She says she has yet to hear back from the secretary.

Moulton says she’s hopeful the feds will responds quickly. In the meantime, she’s asking immigration officials to halt any deportations of EB-5 investors, while the state looks for ways to ensure they get credit for jobs, even if their money never went toward a legitimate project.