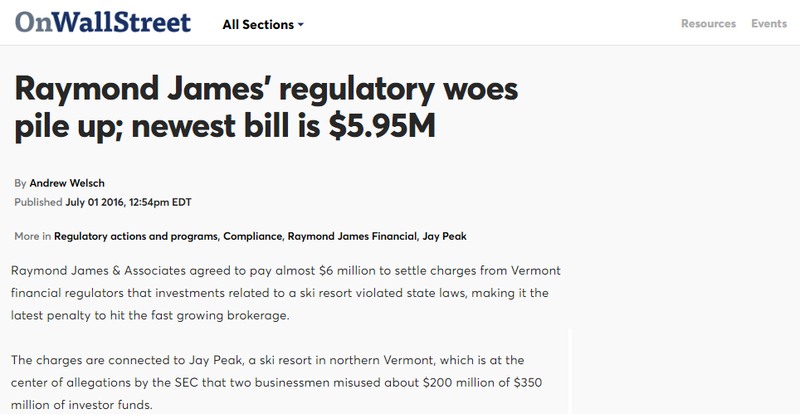 The charges are connected to Jay Peak, a ski resort in northern Vermont, which is at the center of allegations by the SEC that two businessmen misused about $200 million of $350 million of investor funds.

Earlier this year, the SEC filed charges against Ariel Quiros and William Stenger, the owner and CEO of Jay Peak, saying that they took advantage of immigrants seeking permanent residency in the country through a U.S. Citizenship and Immigration Service program for investors.

The immigrants were investing Limited Liability Partnerships, and were told that their investments would be used in connection to Jay Peak. Instead, Quiros and Stenger used about $200 million in ways they were not permitted to, the SEC says, including about $50 million for Quiros' personal expenses. In April, the regulator froze the assets of Jay Peak and related businesses.

In May, an SEC-appointed receiver — who is charged with recovering investors' lost funds — filed a lawsuit against Raymond James & Associates and its parent company, Raymond James Financial, for allegedly enabling the scheme through lax supervision.

Both cases are currently pending.

In this latest regulatory action, Vermont's Department of Financial Regulation accuses Raymond James of supervisory failures related to the immigrants' investments. Even though Quiros used their funds to open at least four margin accounts at the firm, Raymond James failed to obtain adequate documentation that he had the authority to do so, the department says.

In one instance in June 2008, the registered rep assigned to the account permitted Quiros to transfer $13 million of the funds to purchase Jay Peak "despite written instructions that investor funds were not to be used for that purpose," according to the department. The rep is not named in Vermont's regulatory action, but the regulator says that he and his supervisor have withdrawn their registrations as broker-dealers in Vermont.

Quiros, Stenger and their attorneys could not be reached for immediate comment.

As part of the settlement, Raymond James is to pay the receiver $4.5 million in order to reimburse possible claims by investors, another $200,000 to Vermont's Department of Financial Regulation for the cost of the investigation and $1.25 million to the state as an administrative penalty.

"Since the SEC’s seizure of the Jay Peak-related EB-5 projects, investors have been rightly concerned about possible recovery of funds. This settlement contributes to their restitution," Susan Donegan, commissioner of the department, said in a statement.

Donegan added that the alleged wrongdoing originated at a Miami branch office of Raymond James, and not at the company's Vermont offices.

"We are pleased to have reached this settlement with the state of Vermont," a Raymond James spokeswoman said in a statement. "Raymond James has a sustained history of conservative, long-term focused management with an emphasis on putting clients' interests first, and we are committed to ensuring policies and procedures protect clients.”

She also said that some of the facts relating to this matter were previously disclosed in a FINRA announcement in May.

The regulator fined Raymond James' employee and independent broker-dealers a combined $17 million for "widespread failures" in Raymond James' anti-money laundering compliance program. A FINRA spokeswoman said at the time that it was the largest penalty that the regulator has dished out for that type of infraction.