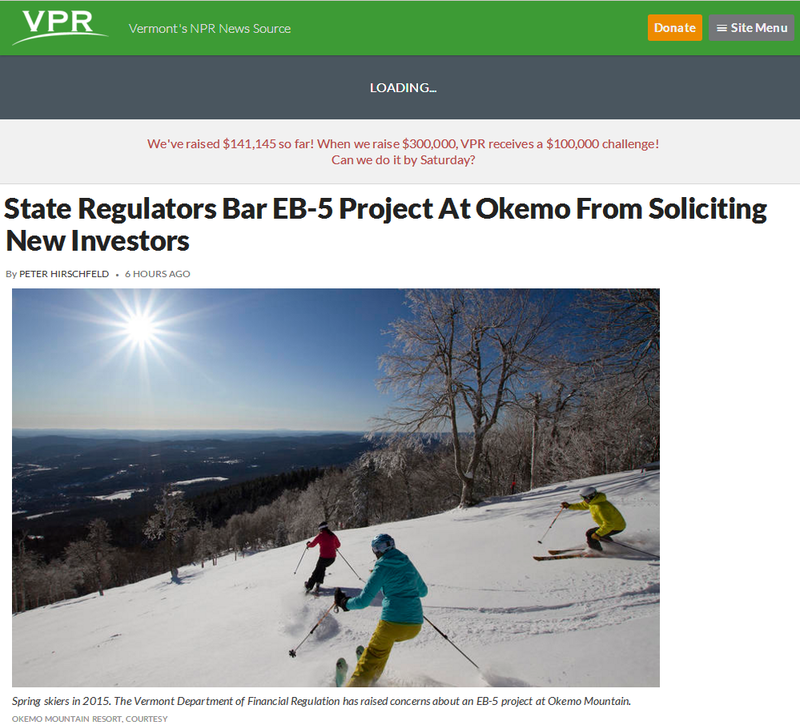 An EB-5, foreign investor-funded project at the base of Okemo Mountain Resort has come under new regulatory scrutiny over statements in its financial prospectus to investors. And the Vermont Department of Financial Regulation has stripped the project of its authority to solicit new investors, pending the creation of new disclosures that regulators say will more accurately reflect the risks, documents show.

Commerce Secretary Patricia Moulton, who heads the state agency that oversees the state’s four active EB-5 foreign investor funded projects, says she can’t comment on the specific concerns while the review is underway. But she says the suspension of investor solicitation “can be and has been a relatively normal course” of action for EB-5 projects.

“I’m not aware that there are situations at this point that could be deal-breakers, but … I don’t have all the details,” Moulton says.

Project developers bill the “SouthFace Village at Okemo” project as “the first four-season luxury home community at Okemo Mountain in over a decade.” At a projected cost of more than $200 million, the real estate venture, according to its developers, will also feature a lodge with “a gourmet eatery, indoor/outdoor pool, hot tubs, health club, and outdoor fireplaces for the ultimate in recreation or relaxation.”

Documents obtained in a public records request indicate that state regulators are demanding changes to the Memorandum of Understanding that the developers need to participate in state’s EB-5 program. They also want revisions to the “Private Placement Memorandum,” a prospectus that projects are required to provide to investors so they can assess risk.

In addition to halting the solicitation of new investments, according to documents, regulators have also told the project's developers that they will have to notify existing foreign investors of material changes in the revised prospectus, when and if one is approved.

The project will then have to give those investors the option of withdrawing their money from the project, if they’re no longer comfortable with the terms of the deal.

Moulton says that kind of order from DFR is in not, in itself, a particularly troubling development.

The EB-5 Immigrant Investor Program is a federal initiative, administered by states, that allows foreign investors to obtain U.S. visas in exchange for a minimum $500,000 investment in a project that yields a certain number of jobs.

Vermont’s EB-5 program came under a national microscope in April, when the Securities and Exchange Commission accused two Vermont developers of using EB-5 projects in the Northeast Kingdom to orchestrate a “Ponzi-like” fraud on foreign investors.

There is no indication that federal authorities are investigating the Okemo project – a records request seeking any documents related to an SEC inquiry turned up nothing.

But state-level regulators, documents show, have expressed numerous concerns about “discrepancies” in Okemo’s Private Placement Memorandum, as well as a “sinking fund” the project principals say they could use to repay investors.

Regulators have also noted other concerns.

“Generally, (the Department of Financial Regulation) is concerned that the necessary distinctions between the various business entities are not being properly delineated,” James Whitehouse, investment compliance analyst at DFR, wrote in a May 13 email to a lawyer for the project developers.

The primary developer behind the SouthFace at Okemo project is Ted Rossi, CEO of the Rossi Group, a lumber-exporting firm based in Middletown, Connecticut. Rossi didn’t respond to a request for his comment. Andrew Becker, general counsel at the Rossi Group and vice-president of the SouthFace Village project, said he did not want to be interviewed for this story. Rossi and Beckers’ lawyer, Doug Hauer, also declined to comment.

In a May 3 email to Hauer, Whitehouse of the DFR points to discrepancies in the project’s “economic impact study” that “create doubt as to the profitability of the project.”

Whitehouse also cites factors – the details are redacted in documents produced in response to a records request – that challenge the “viability” of the “sinking fund” that the developers say can be used to ensure repayment to investors.

Whitehouse also raises concerns about land valuations. And he says there are “several discrepancies contained with the Private Placement Memorandum within the PPM itself, as well as inconsistencies between the PPM and documents provided to DFR in the course of ongoing oversight.”

“As a result of significant and material changes between the representations in SouthFace Village’s original PPM, as compared with what has and what will actually transpire,” Whitehouse says the project needs to cease solicitation of new investors, create new Private Placement Memorandum, alert existing investors to the changes, and give them an opportunity to withdraw their money from the project, if they desire.

It’s unclear from the documents precisely when DFR issued the order to cease solicitation of new investments. But emails indicate the decision has already hampered acquisition of capital for the project.

On April 21, Becker, the vice president of the Okemo project, sent an email to Christopher Smith, the director of capital markets for the Department of Financial Regulation. In it, Becker says he’s had “two very solid inquiries for investment in SouthFace Village” – one from a friend of two Russians who have already invested, and one from a prospective investor from the Philippines.

“I would really appreciate your prompt action as signing investors in this climate would be a real coup for both of us,” Becker wrote.

“We intend to work diligently and as quickly as possible,” Smith responded. “But we cannot sacrifice our regulatory obligations for the sake of convenience. I’m sure you understand.”

Moulton says her agency can’t disclose the number of foreigners who have already invested money in the Okemo project.

It’s unclear what impact the regulatory review will have on the future of the project, but according to an email from Hauer to the Department of Financial Regulation, one issue in particular could be a deal-breaker.

Regulators have indicated that in order for the project to move forward, SouthFace Village will have to change the terms under which they’re allowed to draw down investors’ money from an escrow account.

In a May 23 email to Smith and Whitehouse, Hauer says the “escrow issue may result in Ted Rossi pulling the plug on the offering.”

Moulton says the Okemo project, from her perspective, seems to be going well. She says the project has “successfully sold its first group of condos that it built.” She says she visited the South Face Village not long ago.

“There’s been a lot of progress made in construction, new lifts, new condo units,” Moulton says. “I think that’s about all I’m going to say. They do have to get through this review process with DFR.”

Moulton says the situation with Okemo demonstrates the tenacity of the regulatory oversight of EB-projects. The Department of Financial Regulation began overseeing EB-5 compliance in late 2014, after state officials began to suspect something was amiss with the EB-5 projects being run by Quiros and Stenger.

Moulton says the rigor of DFR’s oversight will ensure the integrity of all EB-5 projects.

It’s unclear when the issues with the Okemo project will be resolved, or whether the parties involved are any closer to resolving the outstanding issues.

The last email captured by the records request is from attorney Hauer, sent to both Donegan and Moulton at 9:48 a.m. on May 27. In it, he references a conversation the three of them had earlier that morning.

“The call this morning was not productive,” Hauer says, “and I terminated it because in the background there was laughter when I was speaking. Let’s please get this discussion re-tracked in a productive way … My firm and our client have been extremely diligent, courteous and positive in all communications. I want to speak directly with Susan Donegan today so I have confidence that I can tell our client this afternoon that the state of Vermont want their EB-5 project to continue … I look forward to a productive discussion going forward.”