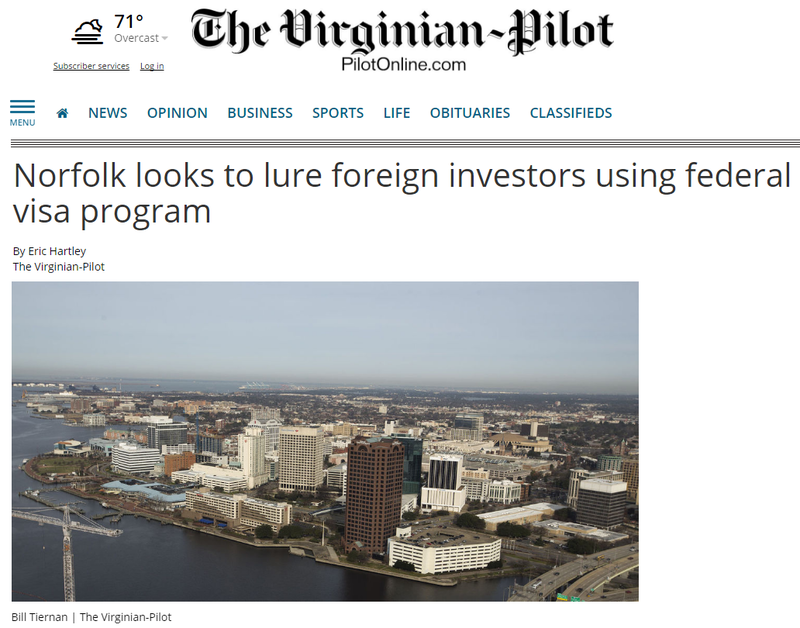 The city’s development arm is hoping to lure millions of dollars in foreign investment for Norfolk projects through a federal visa program.

The Economic Development Authority wants to attract money with the “EB-5” program, which allows foreign citizens to apply to become permanent U.S. residents if they invest $1 million or more in a new business that creates or preserves at least 10 jobs.

“The program’s been around for a long time, and it’s helped to fuel a lot of large-scale projects in other cities,” said Peter Chapman, a deputy city manager who’s also interim director of the authority.

The city and the authority would decide later which deals to seek investment for, but Chapman said they could include developments in the St. Paul’s area, on Granby Street or in Military Circle.

First, Norfolk needs to partner with a “regional center,” a usually private entity approved by the U.S. Department of Homeland Security to broker EB-5 investments.

The Virginia Beach-based Virginia Atlantic Regional Center is one of 24 in the state, according to U.S. Citizenship and Immigration Services, which oversees the EB-5 program.

Norfolk could sign an agreement with any center, in Virginia or not. On Wednesday, the Development Authority’s board of directors approved a plan to solicit proposals.

Kathy Owens, a developer who started the Virginia Atlantic center in 2013, said she’ll submit a proposal. Chapman said the EDA likely won’t make a choice until the fourth quarter of 2016.

Owens said EB-5 money could be a boon for Norfolk and might lessen the need for the city to invest money in developments upfront.

“It can take a chunk of that burden (off) the taxpayers for incentives for developers to come in and do certain things,” she said.

The EB-5 program started in 1990, but the number of regional centers has exploded in recent years. There were 11 at the end of 2007, and there were 796 as of February, program director Nick Colucci said in recent congressional testimony.

Investing through regional centers instead of directly in projects is popular because it allows an investor to take credit for “indirectly” created jobs, as well as direct jobs.

Invest in the USA, a trade group for regional centers, said there was $58.7 million in EB-5 investment in Virginia from 2010 to 2013, which supported 882 jobs and generated $4.78 million in state or local tax revenue.

The program has been linked to fraud allegations and other controversies. Gov. Terry McAuliffe has drawn scrutiny because of his efforts on behalf of an electric car company he founded, GreenTech Automotive.

A 2015 inspector general’s report found McAuliffe received special treatment before he was governor from the then-director of Citizenship and Immigration Services, who intervened to help a regional center that was trying to obtain EB-5 funding for McAuliffe’s company. The regional center was led by Hillary Clinton’s brother, Anthony Rodham, The Washington Post reported.

McAuliffe’s spokesman has said he asked only that the federal government review applications “in a timely fashion.”

Though EB-5 funding is attractive, the program is not a magic fountain of money.

Owens said two projects her center is working on have failed to get investors to put in at least $1 million. Part of the challenge is that investors can get green cards by spending half that amount in rural areas or places with high unemployment.

And like any investment, a deal seeking EB-5 funding has to make economic sense. Owens said her center tries to market its projects through agents and immigration attorneys.

“There’s a lot of wealthy people out there, but it’s still a finite number,” Owens said. “And we’re still competing against other states that have more proactive policies to attract that kind of foreign direct investment to their states.”