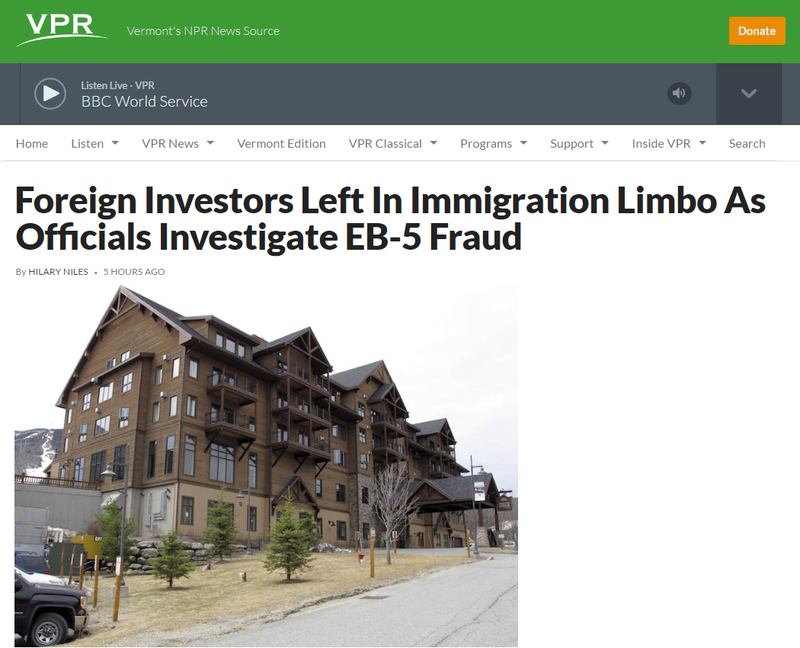 Many foreign investors in Jay Peak’s EB-5 developments are scrambling in the wake of charges that the resort orchestrated a massive securities fraud with their money. But it’s more than just money riding on the outcome for some investors.

VPR met one investor outside in a garden in the Washington, D.C., area, after agreeing to grant him anonymity:

“I don’t want to mention my name because I’m — let’s say, a former politically-exposed person,” the investor says. “And one of the reasons why I was looking for EB-5 was political persecution in my home country.”

This investor in one of Jay Peak’s developments is a former high-ranking official in what used to be the Soviet Union. His children, like those of many other investors, were attending college in the U.S.

But, perhaps unlike some other investors, this one needed to leave his home country for his family’s safety.

And EB-5 could provide it: In the program, foreigners invest half-a-million dollars in an American business. If 10 jobs are created within two years, conditional visas for the investors and their families turn into green cards — permanent U.S. residency.

It’s a scheme Jay Peak began using in 2006 to bankroll $350 million worth of developments at the resort and at the newly acquired Burke Mountain ski area. Other projects in Newport were promised, too.

“He was rather open, answering let’s say difficult questions, for example what happens if you pass away, what’s going with the project? So, we had really a long discussion, maybe an hour and a half,” he says.

And the business case was simple math — reasonable and attractive, the investor says. In late 2010, he went for it. He visited Jay again and saw the construction. He got updates and, slowly, started to earn back his investment.

“So in my view it was a really big surprise when I got the news that there was a massive fraud,” he says.

Surprised, in a way, but not shocked.

“It’s not the first time I was cheated.”

"For me, more importantly is legal consequences ... Are there any fears for me for my family with our immigration status or not." — Jay Peak investor

He got the word via email from his lawyer: In April, the Securities and Exchange Commission and the State of Vermont accused Jay Peak of fraud. Quiros and Stenger allegedly co-mingled $200 million of investor money in ways they weren’t allowed to, and diverted $50 million for Quiros’s personal benefit. Authorities put a federal receiver in charge of the resorts at Jay Peak and Burke Mountain. The debacle threw investors’ monetary returns — and their immigration status — into chaos.

More than 700 investors from at least 74 countries put their money into seven different projects at Jay Peak. Each investor probably had different reasons for wanting U.S. residency. It could be safety or human rights, access to education or American financial markets, or other reasons entirely. For all of them, the allegations that their money was misused strike deep.

Immigration attorney Ron Klaskow sums it up. “[T]he biggest issue for most of those Jay Peak investors is whether the money was used in the actual project that they were supposed to have invested in. And if it wasn’t, should that matter? And should investors be deported because their money was used in a different project?”

Klaskow is representing some investors in Jay Peak projects. He says that families like those of the Russian investor, who got their green cards after their project was finished, are pretty secure.

“I think the Immigration Service would be taking it upon itself to pour gasoline on a fire, to … search out people with green cards and try to deport them.”

That said, he recommends that investors with green cards apply for naturalization as soon as they’re eligible.

“Once you become a U.S. citizen, it’s almost impossible for the government to … strip you of your citizenship,” he says.

"I think the Immigration Service would be taking it upon itself to pour gasoline on a fire, to ... search out people with green cards and try to deport them." — Immigration attorney Ron Klaskow

But, not everybody got a green card. The projects some investors funded remain incomplete. AnC Bio, a Korean biotech firm planned for Newport, was barely even started.

And if a project’s not built, no jobs are created. And if no jobs are created, the EB-5 deal is off. Conditional visas expire; investors must return home. As many as 166 are in this boat now, according to the SEC lawsuit. Some of them have hired Klaskow to help.

“With them, we’re looking at alternative ways to get a green card,” he says.

That could mean applying for a different type of visa, or even investing in a different EB-5 project somewhere else in the country. There’s also talk of applying “extra” jobs created by the completed Jay Peak projects to the projects that didn’t get finished. It’s borrowing from Peter to pay Paul, Klaskow says, but in this case Peter has enough to go around. That’s the theory, anyway.

“If they were asking me for a legal opinion, I think I could justify it. I can’t tell you I’ve seen it done before. So I think it takes a little bit of the Immigration Service using its discretion,” Klaskow says.

Without a viable alternative, investors very well could be deported — it’s happened before with the EB-5 program, though not to any of his clients, Klaskow says. But he doesn’t think it should come to this.

“An at-risk investment to me means that I’m investing in something that has a risk of loss and a possibility of gain. I don’t think that at-risk means that I’m at risk that somebody’s going to steal my money and commit criminal activity,” he says.

Klaskow is optimistic that the investors will find a way to stay in the country. The Russian investor is counting on it.

“The price was a little bit higher than I anticipated but let’s hope, let’s hope for the best,” he says. In the event his green card were to be revoked, he says, he would apply for political asylum here to avoid going home.