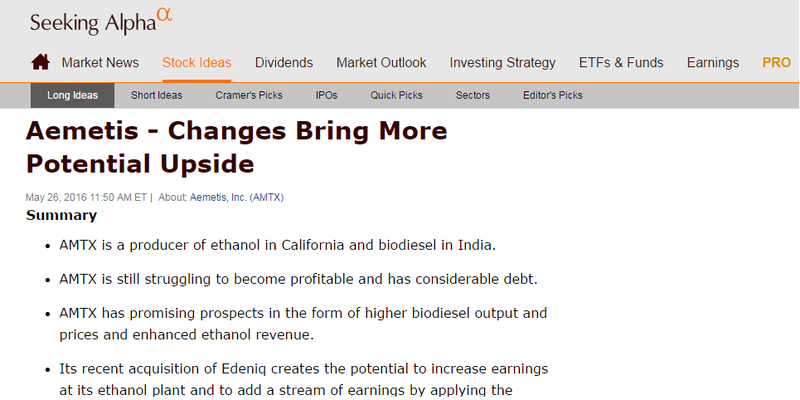 I have written about Aemetis (NASDAQ:AMTX) before - most recently here. AMTX operates a 60 million gallon a year ethanol plant in California and a 50 million gallon a year biodiesel plant in India. The California plant has been operating at capacity but results have been spotty due to a weak ethanol market. The India plant has operated well below capacity due to a variety of marketing and regulatory issues. AMTX has considerable debt but a good bit of it is in the form of low interest EB-5 loans.

Recent Developments: 1. Edeniq - There have been four important recent developments which change the potential for profit at AMTX. First of all, AMTX acquired Edeniq which has a very interesting technology which is already deployed at 6 other ethanol plants. The Edeniq technology enables a conventional ethanol producer, using the same feedstock, to increase its production of regular ethanol by roughly 3 per cent and, in addition, to produce an amount equivalent to roughly 2.5 per cent of original production in the form of cellulosic ethanol ((NYSE:CE)). CE enables its producers to obtain a much more valuable RIN from regulators and can have a value of $4.00 - $4.50 a gallon. This technology will be applied at the California plant and should enhance annual revenue from the plant by some $10 million per year. Perhaps more importantly, the technology can be deployed at other ethanol plants around the country created new streams of revenue for AMTX. It should be noted that the CE RIN revenue depends upon an EPA approval of the technology which AMTX hopes to see this Summer. The announcement of the approval could lead the stock to pop.

Recent Developments: 2. LanzaTech - AMTX has entered into an exclusive contract with LanzaTech under which it plans to implement the LanzaTech technology at its California plant and elsewhere. This technology allows for the use of various forms of waste as feedstocks. If successful, this would allow the ethanol producer to obtain payments for taking the waste rather than making payments for corn or other feedstocks. For example, in the California plant, it could result in a "swing" of about $40 million (the difference between paying out roughly $20 million for feedstock and getting paid $20 million for waste disposal).

Recent Developments: 3. Kansas Plant - AMTX has also acquired a partially constructed ethanol plant in Kansas. While this is very unlikely to contribute to the bottom line in the near future, there is also little or no downside. The plant is subject to a non-recourse lien but AMTX has no other fixed obligations. The long range plan seems to be to deploy the new technologies at the Kansas plant in the future.

Recent Developments: 4 EB-5 Financing - AMTX has received approval for an additional $50 million in EB-5 financing to deploy the LanzaTech technology. As noted in previous articles, this financing is very attractive in its terms. The interest rate is 3 per cent and no principal has to be paid for 4 year. AMTX still has to line up the EB-5 investors in China but, in the past, this has not been a problem.

These developments should provide AMTX with a path to profitability in California even if the ethanol market does not improve. The Edeniq technology will create a higher volume of output and a new stream of RIN revenue. The Edeniq technology can potentially be deployed at many other ethanol plants. AMTX will negotiate arrangements which may allow it to reap the bulk of the additional revenue created. At the rate of $10 million per plant, potentially hundreds of millions of dollars could be generated down the road.

The India plant should ramp up in the next few quarters. It has faced a quagmire of regulatory issues. Biodiesel produced from certain feedstocks commands a huge premium price in California due to carbon credits but it has been hard to obtain and/or import those feedstocks to India. The biodiesel market in India had been hobbled by diesel subsidies and marketing restrictions but the subsidies have been removed and it appears that the marketing is opening up.

AMTX still has considerable debt and, as of the end of the first quarter, was not yet cash flow positive. AMTX owes its primary lender some $69 million and has $23.5 million out on its original EB-5 program. It also will have to make payments in either cash or shares as part of the pay out for the Edeniq acquisition. AMTX is due to receive another $12.5 million in EB-5 funding from funds held in escrow as part of its original EB-5 program. It seems to have a constructive working relationship with its primary lender, Third Eye Capital. And it should be able to obtain yet another $50 million under the new EB-5 program. Still, it would be nice to get to the point of profitability as soon as possible.

Risks - There are a number of risks here. The high debt level could lead to dilution or even worse financial dangers. AMTX has a lot of balls in the air and, although CEO Eric McAfee is a kind of "pinball wizard" in the ethanol area, execution risk is inevitably a risk factor. The AMTX business plan depends, to a great degree, upon government policy in the United States and India. Although the policies in question seem to be well entrenched, policy change is another risk factor. It is also very important that the Edeniq technology receive EPA approval for the enhanced RINs.

Bottom Line - I am still long AMTX. I think we will see good results from the India operation in the next few quarters. The ethanol market seems to be firming up and that alone will help the bottom line. There is enormous potential in the Edeniq and LanzaTech technologies. There is certainly some risk here but, on balance, the risk/reward balance is attractive for long term investors.

I wrote this article myself, and it expresses my own opinions. I am not receiving compensation for it (other than from Seeking Alpha). I have no business relationship with any company whose stock is mentioned in this article.

Editor's Note: This article covers one or more stocks trading at less than $1 per share and/or with less than a $100 million market cap. Please be aware of the risks associated with these stocks.