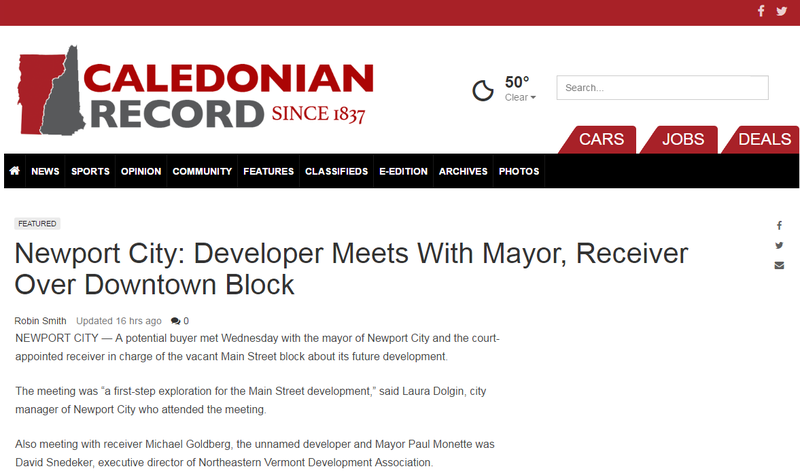 A potential buyer met Wednesday with the mayor of Newport City and the court-appointed receiver in charge of the vacant Main Street block about its future development.

The meeting was “a first-step exploration for the Main Street development,” said Laura Dolgin, city manager of Newport City who attended the meeting.

Goldberg was appointed by the U.S. District Court in southern Florida to manage and eventually sell all the EB-5 funded properties owned by Bill Stenger and Ariel Quiros of Jay Peak and Burke Mountain resorts. The U.S. Securities and Exchange Commission has filed a federal lawsuit that says Stenger facilitated the misuse by Quiros of $200 million in EB-5 foreign investments. Quiros is accused of defrauding investors of another $50 million. The Vermont attorney general filed a similar complaint in Vermont courts.

Goldberg has appointed new management at the resorts, stripped the Q from the Burke Mountain name, taken control of the unopened new Burke Hotel and began preparing to sell all the properties. The resorts are still operating as usual.

The federal judge froze all of Quiros’ finances and companies, prompting Quiros to fight to regain control and get access to funds.

While the lawsuits play out, Goldberg is maintaining all the properties for eventual sale to make whole all the investors and creditors.

That includes the downtown block on Main Street in Newport City, between Central and Second streets, which was going to be the Renaissance Hotel linked to the AnC Bio Vermont bio-tech plant, which will no longer be built.

The discussion with the potential buyer was very preliminary, Dolgin said.

“The initial proposal basically meets our zoning bylaws, having a mixed use space which includes retail on the first floor, but there is much more work and refinement required before anything is final,” she stated in an email.

“This is in the very early stages and it is too soon to anticipate if this will go any further,” she added.

The form-based code zoning created for downtown Newport City requires multiple uses for buildings, with retail or restaurant on the first floors, and commercial and other uses on the upper floors.

The block cannot be turned into a monolithic office-type building or big box store, but must have multiple entrances that match the design of other buildings on Main Street and create a walkable downtown.

Dolgin said Goldberg expects to put out a request for proposals later this summer for the downtown block.

There have been several developers expressing interest in the block.

Both Snedeker and Monette have said they have talked with a developer. Neither could be reached for comment Thursday.