Does Vermont's EB-5 program have a future? 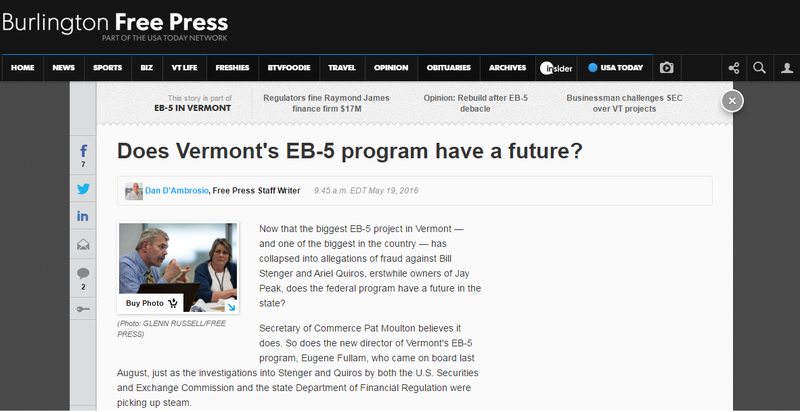 Now that the biggest EB-5 project in Vermont — and one of the biggest in the country — has collapsed into allegations of fraud against Bill Stenger and Ariel Quiros, erstwhile owners of Jay Peak, does the federal program have a future in the state?

Secretary of Commerce Pat Moulton believes it does. So does the new director of Vermont's EB-5 program, Eugene Fullam, who came on board last August, just as the investigations into Stenger and Quiros by both the U.S. Securities and Exchange Commission and the state Department of Financial Regulation were picking up steam.

While Moulton couldn't rank EB-5's place in the overall scheme of investment in Vermont, she said "it's one of the larger capital sources in the state." EB-5 investments have created more than 3,000 jobs in Vermont, directly and indirectly, according to Moulton.

"While we have other good economic development programs, EB-5 has rounded out our portfolio for access to capital, which I question whether we'd be able to achieve through regular debt or existing resources," Moulton said.

She has a message for foreign investors who are asking questions about the alleged fraud at Jay Peak.

"We don't see how this could ever happen again, given the current oversight," Moulton said.

Fullam is headed to China soon to talk directly with brokers and investors "who are still interested in what we have to say," Moulton said. Vermont's EB-5 program remains open for business. That's the message Moulton and Fullam want to send to the Chinese, who make up 85 percent of EB-5 investors annually in the United States.

Fullam points out that the EB5 market is still relatively young compared to other public securities markets, which also underwent "growth pains and enhanced regulatory oversight." He cited the Sarbanes-Oxley Act in 2002 and the Dodd-Frank Wall Street Reform Consumer Protection Act in 2010 as introducing major changes to the regulation of financial practice and corporate governance.

"We're still an approved Regional Center under the USCIS (U.S. Citizenship and Immigration Services)," Moulton said. "We have no expectation believing that's in jeopardy at all."

Pat Moulton responded that while the Vermont Regional Center initially vets a project and helps to structure the capital required, the center does not advise on any day-to-day operations and does not oversee or supervise project managers.

"I believe his underlying assumptions are incorrect," Moulton said.

Moulton further challenged Gibson's contention that the Regional Center should be terminated. She acknowledged that regional centers can be terminated for various reasons, but she said the two primary causes for termination are failing to submit required information, and failing to promote economic growth, including "increased export sales, improved regional productivity, job creation and increased domestic capital investment."

"The Vermont Regional Center is in compliance with the above requirements," Moulton reiterated. "We do not believe our designation is at risk."

Gibson has a long history with the Regional Center and Jay Peak, dating back to 2008 when he visited the resort and was given a tour by Bill Stenger. In an online article, Gibson describes Stenger as a "very charming and likable person who clearly wanted to improve the economic conditions of his county." But Gibson had serious concerns from the beginning that Stenger would never be able to repay his EB-5 investors.

"You have to remember, the only way they were going to be able to repay investors was through the sale of real estate," Gibson said. "Remember that in 2009 we had a collapse of credit markets. The last thing in the world banks were going to finance were secondary mortgage properties. Sales of secondary homes collapsed. Even people from Boston who couldn't afford Vail or Aspen couldn't afford Jay."

While everybody else in the development world was retrenching, Gibson said, shelving projects because they had no access to credit, Stenger was doubling down at Jay Peak.

"Bill said, 'We have all this free money, we can continue to build projects,' but that wasn't the point," Gibson said. "He was obviously successful at raising capital. The point was, would he build something that would return money to investors? My point was, in no way, shape or form after completing construction would the projects be successful paying back investors."

In 2009, Gibson began a correspondence with Vermont state officials, raising concerns about Jay Peak, which continued over six years to no avail, he says.

Gibson had recently been elected to the board of directors of Invest in the USA, the EB-5 industry's trade group, and was concerned that Jay Peak was going to fail and give the industry a black eye. He saw the State of Vermont as the only entity that could prevent that from happening.

"It was clear to me nobody wanted to discuss the viability of the projects," Gibson said.

Neither does Gibson see a way forward for Vermont's Regional Center, should it remain operational, given that there are some 1,000 development projects for EB-5 investors to choose from across the United States.

"At this point there are so many other options which have no history of fraud or failures, if an investor has any hesitation at all they're going to invest in another one, regardless of what steps Vermont takes," he said.

Eugene Fullam, who spent 24 years on Wall Street as an investment banker and analyst, contends that without access to EB-5 capital, Vermont, and the nation, would have a problem. In fact, Fullam says, the foreign investment EB-5 generates has become essential for development across the country ever since the Great Recession.

The New York University Stern Center for Real Estate Finance Research published a study in May 2015 that said the EB-5 capital raised for the reconstruction of the Tappan Zee Bridge alone may approach $1 billion.

It is just these sorts of projects that have drawn the ire of Sen. Chuck Grassley, R-Iowa, chairman of the Senate Judiciary Committee and Sen. Patrick Leahy, D-Vermont, ranking member of the committee. Grassley and Leahy have said the EB-5 program is being abused by developers in large cities. They maintain the program is intended for rural and economically depressed areas, not the glittering streets of Manhattan.

Leahy is on the record saying he won't support renewing the program this September unless it is substantially reformed to put the focus back on rural areas, a debate that continues in Congress. But Eugene Fullam questions what would take the place of EB-5 capital.

"My point is to the appeal of EB-5 financing, whether rural or non-rural," Fullam said. "If you were to abolish EB-5 what do you replace it with? No one has provided an answer to that. That's why I think the probability of EB-5 sunsetting in September is unlikely."

Moulton and Fullam are heartened by what they say are about a half-dozen EB-5 investors who have visited Vermont in the last few weeks. Fullam said the investors are "actively engaged," and have visited at least two of the state's four current EB-5 projects: Mount Snow, SouthFace Village at Okemo, Morrisville/Stowe Airport Project, and Trapp Family Lodge.

A black cloud on the horizon

Andy Becker, the Connecticut-based developer of SouthFace Village, is building 221 units of vacation housing on 300 acres of land adjacent to the ski mountain. Becker and his partner are raising $34 million of EB-5 money for the project.

"It's been well received, I have a good start at it and it's going to be a successful program, however a black cloud appeared on the horizon," Becker said. "Do you know the name of the cloud? Jay Peak."

Fundraising "got harder," and "slowed down" after Jay Peak hit like "multiple bomb shells" in the media, Becker said. He's trying to turn the bad news to his advantage. He points out to potential investors that it was the state's Department of Financial Regulation, concurrently with the SEC, that discovered the fraud. Now, argues Becker, regulators' senses are even more heightened, 'having had this happen under their noses."

"Don't think of Jay Peak as a bad thing, but a good thing," Becker said. "I believe it's going to be OK."

Russ Barr, CEO of the Morrisville/Stowe airport project said the EB-5 component of his $30 million renovation and improvement of the airport is "not that important." Barr declined to say how much EB-5 money he is raising, but he acknowledged the value of the program, and the damage Jay Peak has done.

"It's very unfortunate for the State of Vermont because the program is a fantastic capital raising program for rural America," Barr said. "The money has to be deployed in accordance with the documentation. If it's not, that's a problem."

At Mount Snow, CEO Dick Deutsch has raised all the EB-5 money he needs — $52 million — but the money has been sitting in escrow while he waits for the slow-grinding gears of USCIS to approve his 104 investors' applications for conditional green cards. He's been waiting for two years.

Deutsch will use $30 million to build a 120 million gallon reservoir for snowmaking and the remaining $22 million for a new 38,000-square-foot ski lodge and other infrastructure projects. He wants to make raising EB-5 money an "ongoing thing," and says there's still a lot of interest from investors, but he has no trips overseas planned.

Walter Frame, executive vice president and director of Trapp Family Lodge, said his EB-5 project — a brewery and associated restaurant — is nearly complete. He said the brewery is up and running and the attached 150-seat "beer hall restaurant" is under construction now, with a projected opening in late August.

"Our EB-5 offering is $20 million," Frame said. "We have a handful to finish. I would say we have a few final investors to subscribe."

That's a long way from the concerns expressed by Becky Fu, director of special projects at Trapp Family Lodge, who wrote an email to Economic Development Commissioner Joan Goldstein last August saying, "I just returned from China. Jay Peak is doing lots of damages for VT projects there, as all the agents are aware that JP did not pay back the first phase investors as they promised, and also the recent problems about AnC Bio. Some of our potential investors actually told me they chose other projects from other regional centers because of JP. They don't trust VT project anymore."

Asked about Fu's email, Frame said Trapp has been raising EB-5 money from four or five different countries, but that China still represents the majority of money raised.