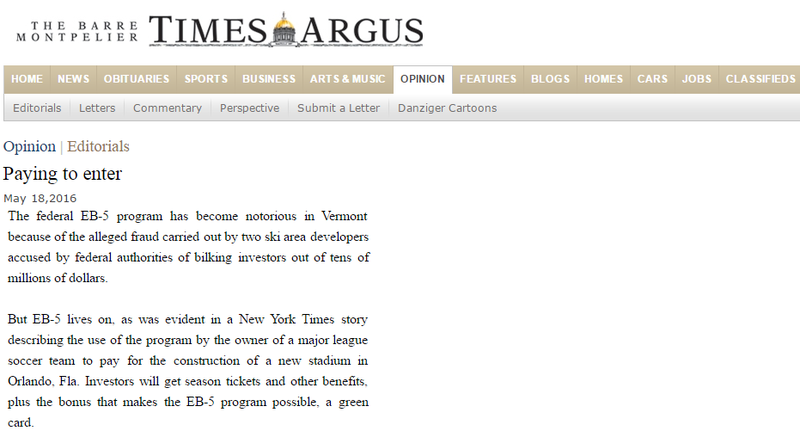 The federal EB-5 program has become notorious in Vermont because of the alleged fraud carried out by two ski area developers accused by federal authorities of bilking investors out of tens of millions of dollars.

But EB-5 lives on, as was evident in a New York Times story describing the use of the program by the owner of a major league soccer team to pay for the construction of a new stadium in Orlando, Fla. Investors will get season tickets and other benefits, plus the bonus that makes the EB-5 program possible, a green card.

Taxpayers in many places have become less willing to fork over great sums to pay for stadiums used to enrich millionaire business people. And well they should. But sports is still big business, and building luxury stadiums for high-flying fans can be a profitable investment. The EB-5 program, it turns out, is a way to make it happen.

The owner of the Orlando City team is Flavio Augusto da Silva, a Brazilian who obtained his visa by investing in the Jay Peak projects now the center of a fraud case brought by the U.S. Securities and Exchange Commission. Da Silva is trying to entice soccer-loving Brazilians to invest in his stadium. For an investment of at least $500,000, they could gain their own visas, as da Silva did.

The EB-5 program was originally designed to encourage investment in impoverished regions, and development in the Northeast Kingdom fit the bill. EB-5 money paid for infrastructure work for the Barclays Center in Brooklyn, but stadium projects in California and Florida were rejected.

Defenders of EB-5 might point to da Silva himself to show the positive impact of the program. He had the wherewithal to invest in Vermont’s Northeast Kingdom, winning his own green card, allowing him to promote new investment and economic activity in Florida. It might be called a win-win.

And yet, apart from the potential for abuse like that alleged in the Northeast Kingdom, a process allowing wealthy investors to buy entry to America seems unsavory and anti-democratic. The economic benefits may justify it as long as they are widely shared and extend beyond the luxury boxes. But what of the millions of potential immigrants waiting in refugee camps in Europe, the Middle East and elsewhere? Are they less worthy than da Silva was? Money should not be the basis for citizenship in a democracy.

Rutland is preparing to receive 100 Syrian and Iraqi refugees next fall, and some residents have wondered if the region has enough jobs, housing and other resources for the newcomers. Rejecting non-millionaire immigrants because they can’t buy their way in is contrary to the nation’s heritage. In any event, business and community leaders in the Rutland region say there are plenty of jobs.

General Electric, for example, is said to have numerous internships available. If major employers like General Electric can’t find workers, the entire region will suffer. The experience in Chittenden County is that immigrants are able and eager workers with an enterprising and entrepreneurial spirit, who lift up their communities. The same could be expected in Rutland.

It could be argued that the nation needs fewer higher fliers with season tickets than it needs community builders at the grass roots level looking to invest sweat and long hours to start up a store, establish a restaurant or learn a trade building aircraft engines. Vermont’s tech industry is growing faster than the rest of the economy, and the state needs people to keep the boom going. The initiative by Mayor Christopher Louras to bring Syrians and Iraqis to Rutland could serve as a model for other regions interested in economic development, cultural enrichment and humanitarian engagement.

As for soccer in Orlando, the games played by the team there are broadcast back in Brazil, and the team includes a world soccer star from Brazil named Kaka. For the people of Florida, one hopes the project ends up better than the giant swindle allegedly perpetrated by Bill Stenger and Ariel Quiros in the Northeast Kingdom. They may have helped da Silva get his visa. Let’s hope they didn’t teach him any of their tricks.