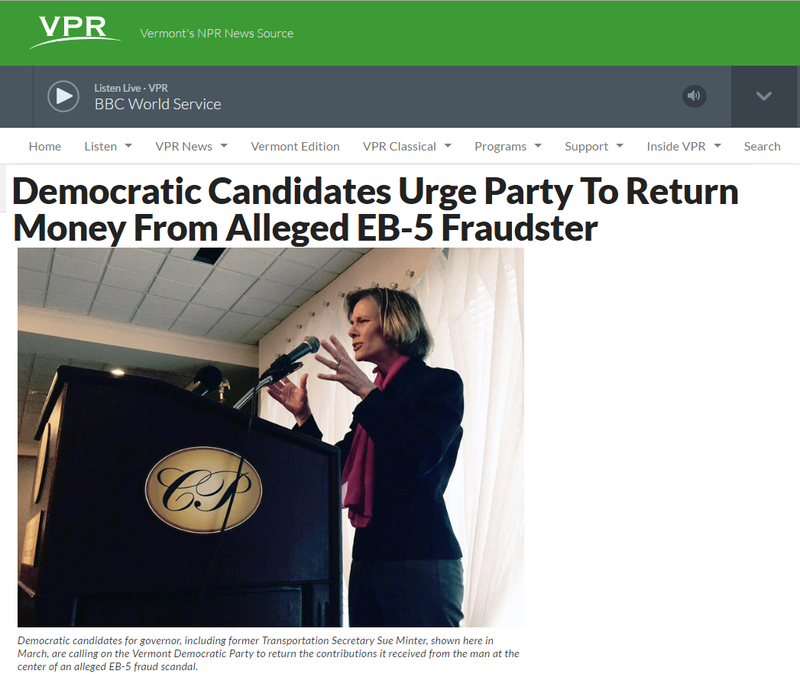 The alleged fraud involving developers in the Northeast Kingdom has put new scrutiny on donations to the Vermont Democratic Party. The party’s three candidates for governor now say the VDP should give up the contributions it received from the man at the center of the scandal.

Between 2012 and 2014, Jay Peak owner Ariel Quiros and one of his close associates donated $30,000 to the Vermont Democratic Party. Those contributions came under a microscope last month when the Securities and Exchange Committee charged Quiros and Jay Peak CEO Bill Stenger with misappropriating $200 million from foreign investors.

Federal officials say that in addition to the misappropriations, Quiros outright stole $50 million from investors to subsidize luxury purchases, including a $2.7 million condominium at Trump Place in New York City.

Democratic candidates for governor are now weighing in on whether the party should return those funds.

“Let me put it this way: If I were the head of the Democratic Party, I would certainly do so,” candidate Matt Dunne said at a press conference Thursday.

"Let me put it this way: If I were the head of the Democratic Party, I would certainly do so." - Matt Dunne

“And when outsized contributions come into the process, these are usually from people who are trying to get something,” Galbraith said by phone Thursday. “And in the case of Stenger and Quiros, what they were after was for the state to be promoting their projects and not to be looking too hard.”

Galbraith says money from Quiros and Gulisano “should be returned.”

“It’s really about making a statement,” he said.

Asked for her stance on how the party should proceed, candidate Sue Minter said in a written statement that if she ends up being the Democratic nominee, she’ll make sure the party gives $30,000 to charities in the Northeast Kingdom, to offset the money it got from Quiros and a Jay Peak executive named George Gulisano.

"It's really about making a statement." - Peter Galbraith

Democratic Party officials said last month that it was weighing whether or not to return the contributions.Christina Amestoy, the party’s communications director, says those deliberations continue.

“Thirty-thousand dollars would have an impact on us, and that’s something we’re considering. We want to make sure we’re there to support our candidates as much as we can,” Amestoy says.

Amestoy says the money contributed by Quiros and Gulisano was spent in the 2012 and 2014 cycles. She says returning the money now might upset donors who thought their contributions were going to support Democratic candidates in 2016.

“If we were choosing to redirect money that represented the contributions we got in 2012 and 2014, a lot of that money would come from donations we’ve received in 2016,” she says.

Amestoy says there’s no timeline for making a final decision on whether to return the money.