Newport City: Obstacle To Downtown Block Sale Can Be Removed 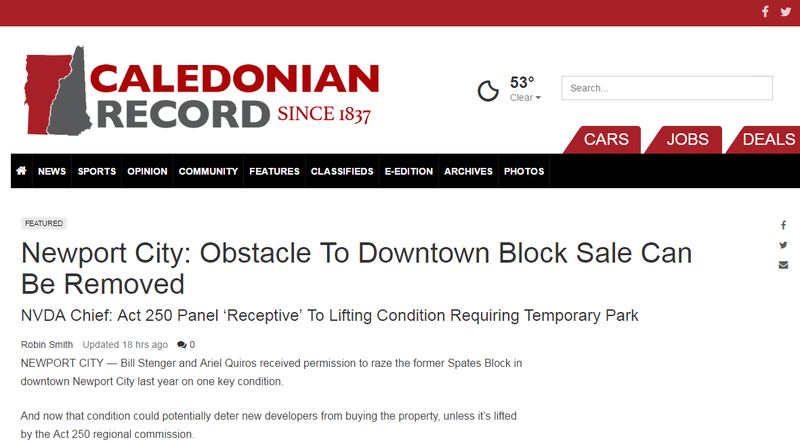 And now that condition could potentially deter new developers from buying the property, unless it’s lifted by the Act 250 regional commission.

Officials heard Thursday that there’s good news on that front.

The two now-scandal-ridden developers with Jay Peak Resort had to agree that if they couldn’t get their development permitted and underway by the fall of 2017, they had to fill with dirt what is essentially a block of cellar holes and turn it into a temporary park on Main Street.

The idea by the Vermont Division of Historic Preservation was to at least provide downtown Newport with usable space if development was delayed.

But the Renaissance Block plans are no more, gone in the wake of lawsuits filed in April against Stenger and Quiros by the Vermont Attorney General and the U.S. Securities and Exchange Commission over all their EB-5 foreign investment developments at Jay Peak, in Newport City and at Burke Mountain. The SEC said Stenger facilitated actions by Quiros who is accused of misusing $200 million in investor funds and defrauding another $50 million.

Now, the block is owned by the U.S. District Court of Southern Florida and in control of a court-appointed receiver, Michael Goldberg, while the lawsuits play out.

Those who want to see the properties of the downtown block developed again are worried that the original condition with a looming deadline that hangs over the site would deter developers from buying the properties.

That might not be as big a problem as it has seemed, said David Snedeker, executive director of Northeastern Vermont Development Association.

Snedeker told members of the Newport City Renaissance Corp and city officials on Thursday that the District 7 Environmental Commission would be “receptive” to changing or removing that condition from the downtown block.

Snedeker said he spoke with the commission’s staff, and heard that an interested developer with ideas for the Main Street block between Central and Second streets should contact the commission office to discuss that condition and ask that it be removed or changed.

“The commission would be receptive,” Snedeker said.

Stenger and Quiros applied to raze the block. There are no permits in place for development.

Newport City Manager Laura Dolgin told fellow NCRC members that there was concern that the condition would be “a turnoff for developers.”

Snedeker said he, Dolgin and Newport City Mayor Paul Monette hope to meet with the receiver next week when he is back in the Northeast Kingdom.

Snedeker said the receiver has also asked about the AnC Bio Vermont property where Stenger and Quiros had said they would build a bio-tech plant.

Snedeker said he has had several companies that expressed interest in establishing plants in Newport City and shared that information with Goldberg.

“He was encouraged to know there are interested companies looking at Newport,” Snedeker said.

Meanwhile, the economic development committee of NCRC continues its work to promote the downtown, with discussion about using grants to create an art installation in the block until it could be developed.

Another idea is to put up the locally designed banners that formerly wrapped the fence around the block in vacant windows downtown during summer events like the Newport Vermont Jazz Festival. They were taken down two weeks ago by the city with the receiver’s permission to protect them and to remove the name “Renaissance Block.”