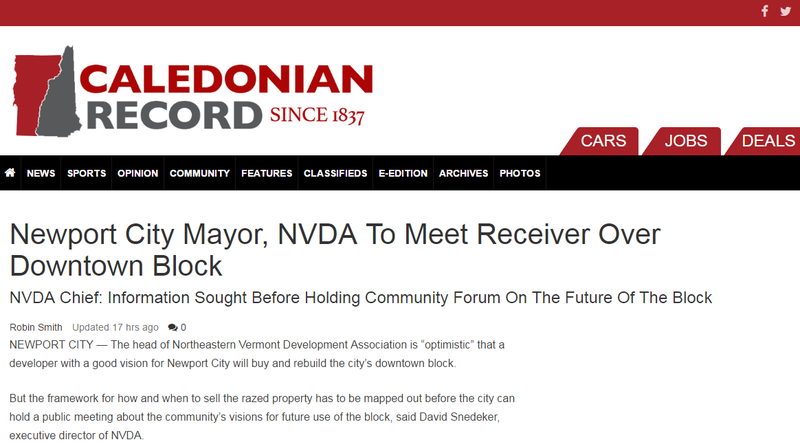 The head of Northeastern Vermont Development Association is “optimistic” that a developer with a good vision for Newport City will buy and rebuild the city’s downtown block.

But the framework for how and when to sell the razed property has to be mapped out before the city can hold a public meeting about the community’s visions for future use of the block, said David Snedeker, executive director of NVDA.

Snedeker said he has met with a developer with a successful track record of developing similar downtown blocks elsewhere in Vermont.

And he is aware that there are others interested in what was once to become the Renaissance Block, a part of the Northeast Kingdom Economic Development Initiative, now involved in a multi-million-dollar fraud scheme according to lawsuits filed by the U.S. Securities and Exchange Commission and the Vermont Attorney General.

In complaints in Vermont and U.S. District Court of Southern Florida, Jay Peak Resort CEO Bill Stenger of Newport City facilitated a scheme by his partner Ariel Quiros to misuse $200 million in foreign investments raised through the federal EB-5 program and Quiros’ fraudulent taking of $50 million.

Jay Peak and Burke Mountain resorts, the downtown Newport block and an industrial lot intended for a bio-tech plant have been seized by the federal court in Miami and put in court-ordered receivership.

Receiver Michael Goldberg, a Florida attorney, has authority to prepare to sell the properties to recoup funds to repay investors and other creditors. He has hired managers to run the resorts and has already removed the “Q” from the former QBurke Hotel.

Snedeker said he expects to meet with Goldberg sometime next week along with Mayor Paul Monette and city manager Laura Dolgin.

The meeting will focus on the receiver’s time line to sell the property and how to structure a “request for bids” for the property, Snedeker said.

Each developer interested in buying the city block would come with ideas for its development, he said.

Snedeker wants to hear what the receiver has to say about what he will seek in bids for the block before organizing and moderating a community meeting.

Otherwise, discussion at a forum would be premature and possibly create expectations that cannot be met given the limitations that the receiver might face under the court process of selling properties, Snedeker said.

The city council, at the request of community members, wants to hold a public forum about what the community envisions for the block. Monette said the council should not conduct the meeting, but ask an outside group like NVDA to moderate it.

Snedeker said NVDA would be willing to moderate once the parameters of the future sale are understood and can be explained to the community.

There is interest in the block, with developers reaching out to the state, the mayor, NVDA and real estate companies like Pomerleau Real Estate in Burlington.

Quiros purchased the Main Street block from Central Street to Second for the Renaissance Block, a four-story building intended to have a hotel and other retail sites that would function in conjunction with the planned AnC Bio Vermont bio-tech plant on the former Bogner site.

At the request of the city’s fire chief and police chief along with downtown property owners and merchants, Quiros and Stenger tore down the dilapidated buildings in the block last year for safety’s sake, removing all the asbestos and hazardous materials and leaving behind clean cellar-holes.

The block is fenced and ready for construction.