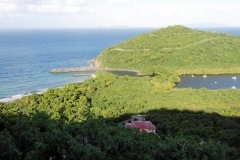 The Friends of Mandahl Bay have sued Gov. John deJongh Jr. over the 99-year lease agreement he entered into with developers to build two hotels and a marina in Mandahl Bay.

The civil lawsuit, filed in V.I. Superior Court last week, asks for the court to take action to stop the proposed development because deJongh violated the public's trust by signing the lease.

The lawsuit says the area is the only undeveloped wetland left on St. Thomas, and should be protected as an ecological resource for the people and wildlife of the Virgin Islands.

The Friends of Mandahl are a nonprofit community group advocating for the preservation of Mandahl Bay. Other plaintiffs in the case are Mandahl residents Anna and Alcedo Francis, Paul and Brenda Walwyn and Camp Umoja.

All of the plaintiffs say they will face harm if the area is developed. The proposed development would bring noise, traffic, pollution, block the view from their properties, and limit their enjoyment and access to the Mandahl beach and salt pond, which is also used by the camp for environmental education programs for youth.

The lawsuit states that the governor's actions are illegal based on the public trust doctrine, which is an ancient concept that sovereign governments must protect the interests of the people.

"Submerged lands are impressed with a trust for the benefit of the public, and the sovereign's use and disposition of those lands must be consistent with that trust," the complaint states.

"Moreover, the public trust doctrine imposes an affirmative obligation on governmental entities to protect the people's common heritage regarding streams, lakes, marshlands and tidelands," it says.

The lawsuit takes issue with the fact that there was no public input or involvement in the lease process.

It also notes that the salt pond is home to protected species like the brown pelican and certain corals.

"The development contemplated by the Development Agreement and Lease referred to above will have major and detrimental consequences for the environment and for the people of the Virgin Islands, particularly with respect to Parcel 33 and the Mandahl Salt Pond. Specifically, and without limiting the generality of the harms suffered, the development will result in loss of habitat for protected species of land and water creatures, destruction of mangroves, which provide a vital part of the ecology of the area and filter runoff from the land, thereby increasing pollution of offshore waters, loss of sea grass, noise and air pollution, increase turbidity of the water, and decreased quality of the water," the complaint states.

The plaintiffs are asking the court for preliminary and permanent injunctive relief that would stop the government from allowing the Port of Mandahl project to continue.

The latest version of the Mandahl project will include a 300-room Hyatt Regency Hotel and a second 200-room, 3-star hotel with an on-site 50,000 square-foot conference center.

The first phase is supposed to take two years to construct, from 2016 to 2017, and will include:

- A new marina with 50 slips located in the current salt pond area.

- The construction of 21 vacation club timeshare units and 46 estate lots for homes.

The second phase also is expected to take two years to construct, from 2018 to 2019, with 2020 being the first year of operation for the latter-built facilities. It will include the construction of:

Transcontinental Realty Investors is the developer for the project, and wants to begin the $487 million "Port of Mandahl" project in 2016, though operations at the resort would not begin until 2018, according Mandahl Bay Holdings President Karl Blaha.

Mandahl Bay Holdings is a wholly-owned subsidiary of Transcontinental Realty Investors, which is a publicly traded corporation listed on the New York Stock Exchange as TCI.

TCI recently purchased the nearby Mahogany Run Golf Course, and plans to market the golf course as part of the amenities for the resort and convention center.

The lease for Mandahl Bay, which replaces the previous 99-year lease, will require a $12,000 annual payment, or $1,000 per month, from Mandahl Bay Holdings, according to Property and Procurement Commissioner Lynn Millin Maduro.

Mandahl Bay Holdings was formerly overseen by Mark Small, who passed away earlier this year.

While the lease was drawn up by Property and Procurement and signed by the governor, it will require ratification by the V.I. Legislature to be finalized and executed.

No Senate hearings have yet been scheduled to consider the Mandahl lease agreement.

If the lease is ratified by the Senate, the developer will have to go through the federal and local permitting process.

The first major hurdle will be submitting an application to the Coastal Zone Management Division for development of the land and water.

That process involves a public hearing process, decision by the CZM committee, and any CZM permits must also be ratified by the Senate.

Plans for development include a marina, located in the mangrove-ringed salt pond, so the developers will need to secure U.S. Army Corps of Engineers permits as well, plus any other local building permits for the construction.

The first 99-year lease, which this proposed lease would replace, was signed in 1964 by former Gov. Ralph Paiewonsky. That deal was for a developer to build a hotel on the nearby island of Hans Lollick and 150 homes and marina at Mandahl Salt Pond. That project never got off the ground and the lease has traded hands several times in the decades that followed. The Hans Lollick piece was separated from the Mandahl lease and currently is owned by a different developer.

The latest developers, Mandahl Bay Holdings, applied for land and water CZM applications in 2009 that were met with strong opposition from the community.

More than 400 people attended a public CZM hearing on the two permit applications for the project in March 2009.

The CZM committee denied the permits, but the developers appealed the decision to the Board of Land Use Appeals where it has languished without action ever since.

The developers of the revamped project, "Port of Mandahl," say that appeal will be withdrawn and the project will submit brand new CZM applications if the lease is ratified by the Senate.