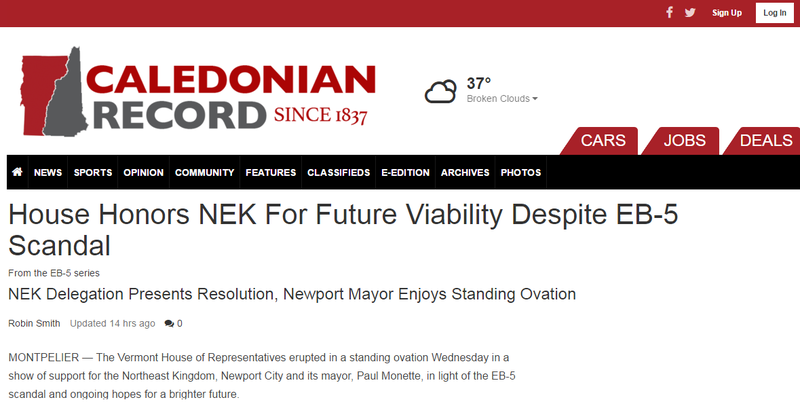 The Vermont House of Representatives erupted in a standing ovation Wednesday in a show of support for the Northeast Kingdom, Newport City and its mayor, Paul Monette, in light of the EB-5 scandal and ongoing hopes for a brighter future.

The applause came after the reading of a House resolution written by Rep. Michael Marcotte of Coventry and sponsored by the entire NEK delegation recognizing the NEK and its potential despite adversity for economic development with help from local, state and federal partners.

Marcotte wanted the resolution and its passage to coincide with the visit by Monette and David Snedeker, executive director of the Northeastern Vermont Development Association, explaining what kind of help might be needed given the EB-5 scandal and lawsuits, loss of a hoped-for AnC Bio Vermont bio-tech plant and the vacant lot in downtown Newport City where the plan was for a hotel that will not be built.

A federal court stripped ownership of these properties and Jay Peak and QBurke resorts from Bill Stenger and partner Ariel Quiros after the state and federal governments filed lawsuits alleging misuse of $200 million in EB-5 foreign investments and fraud involving $50 million.

Monette and Snedeker spoke Wednesday with the House Commerce and Economic Development Committee, where Marcotte is vice chairman.

The committee heard Thursday from Michael Goldberg, the court-appointed receiver in control of Jay Peak Resort and QBurke Resort properties.

Marcotte said the committee wanted to hear what reporters and employees were told, that the resorts are operational and not going to shut down and cost hundreds of jobs in the NEK.

The committee also heard from the Vermont Bankers Association and that group’s willingness to put packages together to assist in any way, Marcotte said.

The intent is to draw the interest of developers and companies looking at the properties for sale in the NEK, from operating resorts to a vacant lot and an industrial site ready for construction.

The legislators from across the state are stepping up to offer their support, Marcotte said.

“They are saying ‘If there’s anything we can do, let us know.’ It doesn’t matter, Democrat, Republican or Progressive,” Marcotte said, calling the reaction just like what happened when Tropical Storm Irene devastated parts of southern and central Vermont.

Marcotte said he heard that there are viable buyers for the razed block in downtown Newport City.

“It sounds to me like that could be sold very quickly,” he said.

Goldberg “is willing to meet with them. He’s ready to sell it.”

The former Bogner property where AnC Bio Vermont was to be located might take longer, because there are investor funds still in escrow accounts that must be identified, making that property more complicated to sell, Marcotte said.

The resolution H.C.R. 377 recognizes the Northeast Kingdom, as coined by Gov. George Aiken in 1950 at the organization of Northeastern Vermont Development Association, as a place of entrepreneurs and opportunities, with the runway extension at the NEK International Airport and the foreign trade zone.

It calls NVDA “an important catalyst for a region inhabited by hard-working Vermonters, where the harsh climate and largely rural landscape pose both economic challenges and opportunities.”

The resolution “recognizes the economic vibrancy of the Northeast Kingdom.”