Newport City-DerbyMoulton: Focus On Service To Compete With Walmart 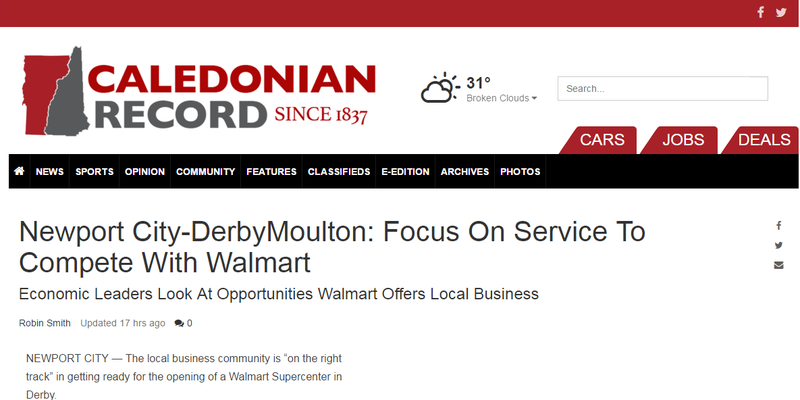 The local business community is “on the right track” in getting ready for the opening of a Walmart Supercenter in Derby.

Conversations in the past two weeks have been dominated by the news about the EB-5 lawsuits and scandal swirling around Jay Peak and QBurke resorts and the owners and the multi-million dollar fraud and misuse allegations.

But the construction of the Walmart store has continued right along at the location off Route 5 on the Newport City/Derby line. The ribbon cutting is tentatively planned for early November.

Pat Moulton, secretary of the Vermont Agency of Commerce and Community Development, told Vermont’s North Country Chamber of Commerce last week that the Walmart store opening will be good for economic development in this region that’s reeling from the EB-5 scandal and economic impact.

Moulton praised local economic development leaders for focusing on Walmart and the business community’s reaction to it.

Customers will have options - to go the store where products are the cheapest or to the local store where you can get help using those products, Moulton said.

Customer service and the local touch - “that’s exactly what you need to do,” Moulton told chamber members at the annual meeting last week.

“It’s a real opportunity and services is where it all comes home,” she said.

The economic development committee of the Newport City Renaissance Corp (NCRC), in collaboration with other organizations and volunteers, held a summit about Walmart’s opening, impact and opportunities in March.

More than 69 businesses were represented among the 113 people at the summit, along with residents, municipal and state officials and others.

She called the summit one of the largest business events in the area in quite some time.

Businesses from across the region, including downtown Newport City now dealing with an uncertain future for the razed former Renaissance Block on Main Street, wanted to know more detail about where Walmart expects to draw its customers for the Walmart store in Derby, Geraghty said.

Mayor Paul Monette said he has heard that Littleton, N.H., is expecting a loss of customers from Orleans County who would rather shop locally in Derby.

That means they will also shop in the downtown area as well, Geraghty said.

“How do we use Walmart to promote our businesses?” was a big question, she said.

Others are concerned about traffic impacts in the region and whether people would bypass East Main Street in Newport City, for example, to avoid traffic headed for the Walmart entrance further east.

The lack of side walks linking Walmart to Newport City were considered an issue.

Others had questions about when Walmart will begin hiring. Geraghty said Walmart is expected to open a hiring center in a conspicuous area in June.

The various economic development groups want to coordinate with the chambers of commerce to identify signs needed to attract traffic to local shopping areas, to arrange to have a local business kiosk within Walmart, and form a resource group to identify and promote grants and low-interest loans to help businesses improve their buildings.

Others want to know what Newport City will do with the $600,000 in economic impacts that Walmart developer Jeff Davis of JL Davis will pay to Newport City over six years.

They also want to know what the long-term vision is and how Newport City and Derby will work together.

Geraghty expects to plan another Walmart impact meeting to share information and to talk about developing a public-private partnership.

Moulton, who will be working with Monette and the city about the future of the downtown block now that the plan for a hotel paid for by EB-5 money has evaporated, said that looking at the Walmart impact and how businesses can benefit is a good decision. She promised that the state will help with ideas and grant opportunities for business.

“Walmart is a chance to bring people in and pull them downtown,” she said.

“I think you are on the right track.”