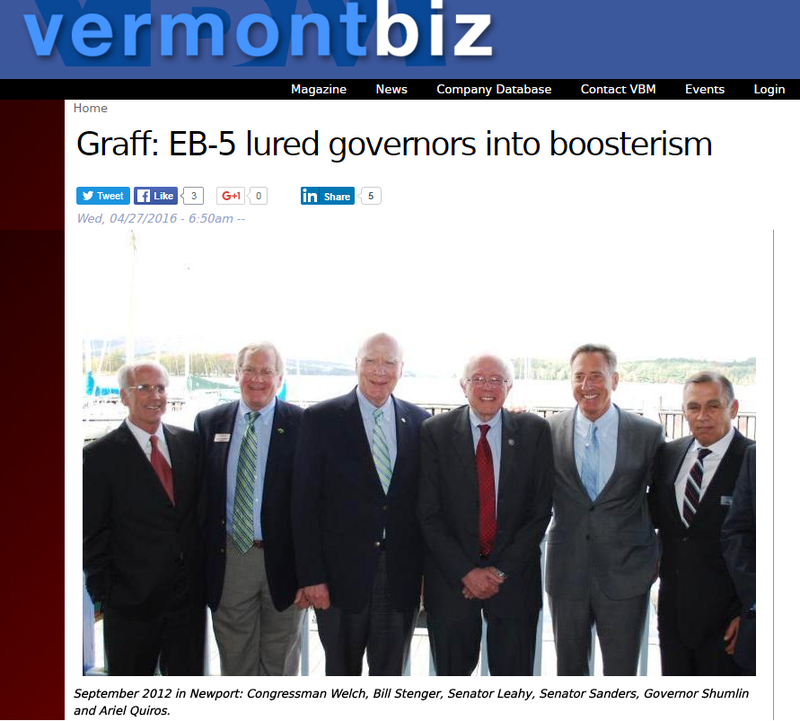 by Chris Graff Vermont Business Magazine Years ago the publisher and writer William Allen White was so sure there had to be corruption in Vermont government he sent up investigators and offered rewards. None was found. White had his own theory why this was so: “There are so few pennies in the state treasury that every Vermonter knows where every one of them is, all of the time.” Now days, of course, there are enough pennies circulating in the state that White’s theory probably is long outdated.

But with all the talk about the allegations of the EB-5 fraud one point needs to be remembered: Vermont state government is still pretty squeaky clean.

Amid all of the allegations of hundreds of millions of dollars misspent and juggled in a hugely complicated Ponzi scheme, Vermont’s elected officers primarily appear to be guilty of over-enthusiastic boosterism.

More seriously, officials appeared not to appreciate or understand the effect of that boosterism. The overseas trips they took to promote the EB-5 program had an air of every other economic development tour – the message was basically the same as if the leaders were trying to entice businesses from New York or Quebec: Vermont is a great place to live and do business.

But reading old articles today through the prism of the alleged fraud reveals a naiveté of the power of the state’s endorsement of the program and the projects on those faraway markets. Vermont’s projects gained an extra credibility with potential investors sitting in an auditorium half way across the world when they heard Vermont’s elected officials provide a stamp of approval.

An article a year ago in EB5Investors Magazine trumpets the success of the Vermont EB-5 program, touting the close relationship between the state and the developers. “Before any projects can go to market with a Vermont EB-5 Regional Center affiliation, the state’s Department of Commerce and their associated EB-5 experts must approve them,” the article says.

“The state provides oversight, ongoing reviews, and pre-approval of projects… This thorough review lends an air of credibility when taking projects to a market full of investors who highly value certainty in their investments,” the magazine wrote.

It is clear today with hindsight that for too many years the state failed to grasp the need to regulate the investments and the investment projects. But Vermont was not alone.

For much of the EB-5 history no one understood the huge potential for wrongdoing in the program. Not the Securities and Exchange Commission. Not state regulators across the country.

Because, frankly, for much of its history the EB-5 program was a failure. Started in 1990 it attracted little interest from developers or from those seeking visas. In 2003, for example, the feds issued EB-5 visas to only 65 immigrants.

The economic collapse of 2008 breathed life into the program. With banks refusing to lend to businesses and developers, the EB-5 program suddenly became the go-to spot for easy money.

Vermont’s EB-5 program was launched by then-Governor Howard Dean and his commerce secretary, Bill Shouldice, in the late 1990s. It was truly envisioned as a way to spur economic development. At all levels of government back then no one was thinking that the payments were investments or that they needed to be regulated just like securities.

Abuses in the program nationally started coming to light within the last five years. One of the biggest ones involved development of a Chicago Convention Center in which more than 200 Chinese investors gave up some $145 million for a project that was never going to happen.

In that case the backing of the state was highly touted in the promotion of the project. The governor of Illinois traveled to China to promote the project and was featured in a promotional video. The developers cited the government backing as evidence the convention center was the “safest” project.

What’s too bad here is that Vermont had a perfect model to follow for the program: The state’s handling of captive insurance. Through nearly 40 years Vermont has shown it can both promote and regulate a business – and get high marks for both.

Chris Graff, a former Vermont bureau chief of The Associated Press and host of VPT's Vermont This Week, is now vice president for communications at National Life Group. He is author of, Dateline Vermont: Covering and uncovering the newsworthy stories that shaped a state - and influenced a nation.