HARTFORD — If the purpose of building a stadium for the Yard Goats was to attract commercial activity, the city is close to claiming a victory in the form of a new hotel in Downtown North, a few hundred feet away from the ballpark.

A Massachusetts family that owns Subway restaurants in Connecticut has most of the approvals and financing it needs to start construction this summer on an 81-room Candlewood Suites hotel.

The property, now a gravel lot on Market Street next to a Citgo station at the foot of the Reverend Moody Overpass, sits in a stretch of the city that, like most of the nearby DoNo development, has seen little activity in recent years.

"We are still working on putting together all the pieces and finalizing so we can start construction," said Ankit Patel, of Hadley, Mass. The partnership, called CAV LLC, includes two other family members listed as living at the same address.

The hotel would be eight stories high, on the corner of Pequot Street, directly adjacent to the elaborate I-91 pedestrian overpass that leads to Riverside Park, across Market Street from the back side of the Travelers operations center. 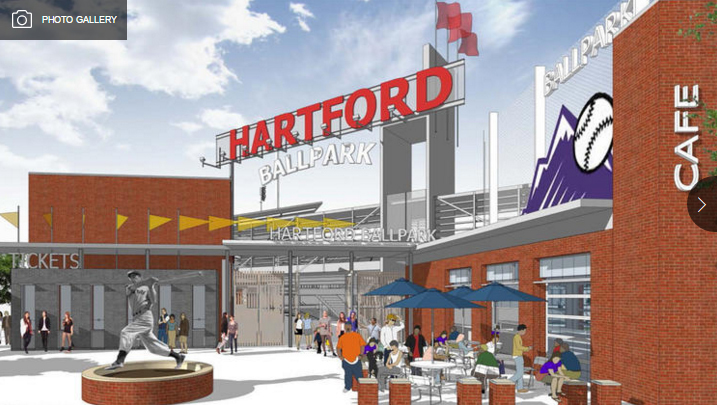 The hotel plan is not part of the $350 million DoNo Hartford development, which includes the ballpark, apartments, parking garages, a brewery and pub for the Thomas Hooker Brewing Co. and some retail, including a supermarket.

And the hotel idea was not hatched after the city launched DoNo. Far from it; CAV bought the property, 0.8 acre, in 2006 for $1.15 million, with the idea of building a hotel back then.

Patel knew about the ballpark and said he's eager to open a property nearby, but, in a further sign that he's confident of a hotel on Market Street, he didn't know the details of the multi-use DoNo plan. As it turns out, the use could be complementary, with no new hotel as part of the plan.

"This hotel has actually received all of the zoning approvals about five years ago," said Thomas Deller, the city's development director, "and they couldn't get financing."

That changed after the ballpark became a reality, Patel said.

"It helped, no doubt about it. The overall market is also doing better, the hotel market," he said. "Two or three years ago it was hard, nobody wanted to do any new construction anywhere."

The hotel would be "middle-scale market," Patel said, at generally lower room prices than a Homewood Suites, which he described as "full-service."

Patel said his group has zero debt on the property, which was listed by the city with a market value of $314,200 in 2011. He said his family does not own any hotels, but owns restaurants, including three Subway locations. He did not want to talk about the holdings but state and city records show the address of CAV as the same location as a Subway in Brooklyn, Conn., and the same owners also have a Subway in Killingly.

Almost any new commercial construction that doesn't displace a historic property should be welcome news in Hartford, where privately financed cranes have been rarer than a 5-run home run for years, even before the recession. My colleague Ken Gosselin reported earlier this year that hotel occupancy in the city was just 58 percent in 2014, barely budged from 57 percent in 2013, and well below the industry average of 70 percent, according to Smith Travel Research.

The modest-priced, 96-room Holiday Inn Express on Asylum Street downtown remains closed after water problems, and even before it closed, that segment of the market was viewed by some as underserved in Hartford.

There will be other announcements soon related to properties near DoNo Hartford, Deller said. And so, even as the city sweats the financing for the $56 million ballpark, some benefits are apparently close to reality.

Whether the balance will favor the city's risky move remains to be seen — but in some ways, the first pitch is in the glove.