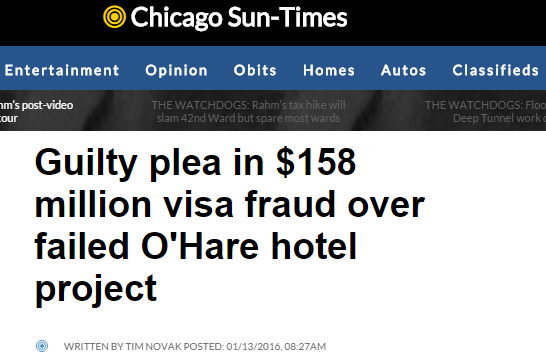 A would-be hotel developer pleaded guilty Tuesday to wire fraud, admitting his role in a failed plan to build hotels and a convention center near O’Hare Airport by fraudulently raising more than $158 million from Chinese investors who were expecting to get visas under a controversial federal program that aims to create jobs.

Anshoo Sethi, 32, admitted he provided investors with forged documents, including a bogus letter from Hyatt Hotels, to get them to invest in his development, which had been approved by the U.S. Citizenship and Immigration Services, the agency that grants visas to foreigners who invest at least $500,000 in approved projects under the program known as EB-5.

None of Sethi’s 290 investors ended up getting a visa. They’ve each received a refund of their $500,000 investments.

Sethi still must repay the $41,500 administrative fee he collected from each investor — a total of $11.5 million. He has returned $1.5 million so far and is suing to recover nearly $5.7 million in commissions he paid brokers who hooked him up with the investors.

Sethi spent some of the remaining $4.3 million on items for himself, his family and friends, according to prosecutors. But his attorney Patrick Collins said most of the money was spent on the failed project, including architect fees.

Sethi, who lives in the South Loop, faces up to 20 years in prison.

Sethi and his family have owned the Higgins property for several years, hiring the law firm of Illinois House Speaker Michael J. Madigan, D-Chicago, to file appeals that have lowered their property taxes.

In 2010, Sethi brought in advisers to apply for the federal EB-5 program. He said he planned to redevelop the property, building a convention center and as many as five hotels there.

The project would be financed in part by foreign investors seeking visas through the EB-5 program. Based on plans for the project, the federal government approved the application from Sethi’s company, International Regional Center Trust of Chicago LLC, to join the EB-5 program.

There are more than 20 such “regional centers” in Illinois — including one run by former Mayor Richard M. Daley and his son Patrick Daley — that can raise money from foreign investors under the EB-5 program.

In his plea deal, Sethi admitted providing phony documents to investors, assuring them that the hotels would be operated by Hyatt and other companies that actually had no such deals for the project.

Less than two years after the project was approved for the visa program, the U.S. Securities and Exchange Commission filed a civil complaint against Sethi and his companies, accusing them of violating securities laws. A year later, the federal government charged him with multiple counts of wire fraud.

Sethi “has acknowledged and accepted responsibility for the mistakes he made while pursuing his vision to build a hotel and convention center and create jobs in Chicago,” Collins said. “This was a real project. They hired architects.”