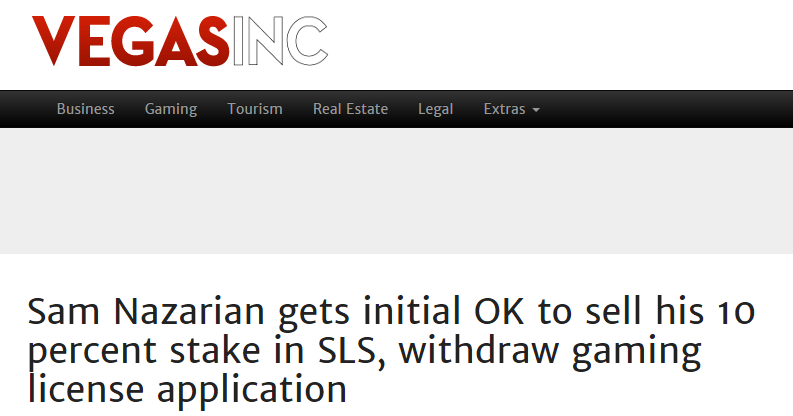 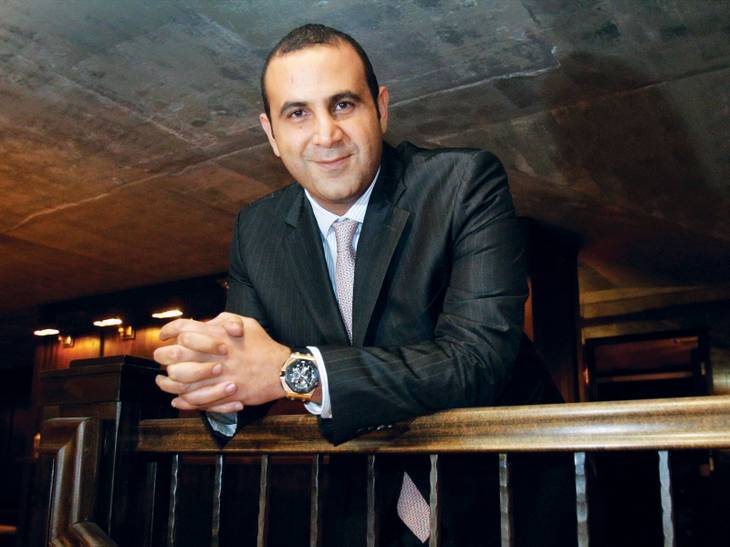 SLS Las Vegas visionary Sam Nazarian came before Nevada gaming regulators today seeking their blessing to remove his financial stake in the resort he created and withdraw his application for a key employee license there.

The Gaming Control Board approved Nazarian’s withdrawal request without prejudice and also gave initial permission for the resort’s majority owner, Stockbridge Capital, to buy the remaining 10 percent interest. The Nevada Gaming Commission should consider the moves for final approval in two weeks.

Peter Bernhard, a former head of the Gaming Commission, represented Nazarian at the meeting and described him as a “man of great accomplishments” who wishes nothing but the best for SLS Las Vegas.

And the board’s chairman, A.G. Burnett, told Nazarian he had successfully complied with the restrictions regulators imposed on him nearly a year ago.

It was a stark contrast to Nazarian’s dramatic regulatory appearances in December, when the board and the commission raised serious concerns about Nazarian’s drug use and his relationship with a man he said shook him down for cash.

The commission ultimately gave Nazarian an extremely limited gaming license that left him barred from participating in casino operations but left open the opportunity for him to receive a full license in the future.

Between his two December appearances, Nazarian revealed that he would no longer be involved with day-to-day operations at SLS Las Vegas. But his company, SBE Entertainment Group, remained tied to the resort until it revealed last month that it was shifting from a management agreement to a licensing setup with Stockbridge.

That means the operations and branding of SLS Las Vegas can continue unchanged, though SBE will not be involved with running the resort.

Bernhard told the board today that Nazarian will not have “any ownership interest or equity” in SLS Las Vegas moving forward. Bernhard said Nazarian still looks positively upon his experience with the resort.

“Mr. Nazarian stands before you today and he looks with great pride on what he has done and what he has accomplished at the SLS,” he said.

Nazarian “dreamed the dream” and developed the $415 million transformation of the former Sahara into SLS, Bernhard said.

Nazarian spoke to the board only briefly to tell them that he understood the message they sent him last year.

“Thank you for giving me that shot, and hopefully I earned your trust back,” he said.

Burnett said Nazarian had complied with nine conditions imposed on him, as he was “thoroughly investigated” over the past year. That investigation included drug testing and allowing regulators to inspect his emails, according to Burnett.

Nazarian has left SLS in the hands of Stockbridge and Scott Kreeger, the resort’s president, who was also approved by the gaming board today for licensure as a key executive. They have their work cut out for them: SLS reported net losses of $35.3 million in the first quarter and $48.7 million in the second quarter this year.

The resort is still challenged by its location on the far end of the north Strip with little else around. Kreeger has been working on adjustments, notably revamping the loyalty program, in an effort to create “drivers” that give customers a compelling reason to venture to the casino.

Nazarian said after his appearance before the board that he saw some areas of the resort that are doing well. But he admitted it was a tough environment.

“We never thought it was going to be easy,” he said.