This Streeterville hotel project comes with 40 visas for investors 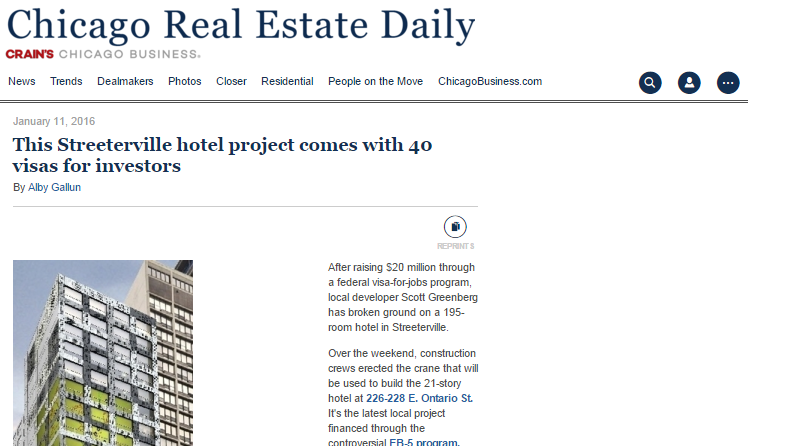 After raising $20 million through a federal visa-for-jobs program, local developer Scott Greenberg has broken ground on a 195-room hotel in Streeterville.

Over the weekend, construction crews erected the crane that will be used to build the 21-story hotel at 226-228 E. Ontario St. It's the latest local project financed through the controversial EB-5 program, which allows foreigners to become U.S. residents if they invest in qualified business ventures, like real estate developments. To raise the money, Greenberg racked up a lot of frequent flier miles to pitch investors in places like China and India.

“It was a great adventure—a lifetime adventure,” said Greenberg, president and co-owner of ECD, a Lincolnshire-based developer. “I've developed relationships all over the world.”

Among those he connected with: 40 people who invested $500,000 apiece in the hotel, which will be part of Marriott International's Autograph Collection. About 75 percent of the investors are Chinese, with the rest coming from places including Canada, India and Dubai, Greenberg said.

He also is financing the project with a $36 million construction loan from Associated Bank and Inland Bank, he said. The project includes equity investors, including Greenberg, but he declined to provide specifics or disclose how much the project would cost.

WILL THE RECOVERY LAST?

It's a great time to own a hotel now—downtown hoteliers likely had a record year in 2015—but it's unclear how strong the market will be in the spring of 2017, when the Streeterville hotel is expected to open.

Some observers worry that the current recovery, now in its seventh year, will lose momentum as developers keep building more rooms, creating an oversupply. Tishman Realty plans a 395-room hotel just down the street from Greenberg's project.

Greenberg isn't blind to the risk. He opened his last hotel, the Wit in the Loop, in 2009, just after the hotel market crashed. Though the hotel itself suffered early on, it survived thanks to its rooftop bar and restaurant, Roof, which quickly took off, he said.

In 2012, after the market recovered, Greenberg was able to refinance the Wit with an $87.6 million loan, allowing him to pay off an $82.4 million construction loan.

For the Streeterville hotel, Greenberg said he's trying to limit his risk by raising a large chunk of money through the EB-5 program and limiting the size of his construction loan.

“There's a lot of building,” he said. “I've got to be cautious, but it's a question of picking the right project in the right location at the right time.”

As part of the Autograph Collection, the hotel will have its unique brand and identity, but be part of Marriott's reservation system. Greenberg, who declined to disclose the name of the hotel, doesn't plan a rooftop bar but is working on a food and beverage offering that he said will be “very original.” Chicago-based Pepper Construction is the general contractor on the hotel, which was designed by Chicago-based Koo & Associates, the architecture firm that designed the Wit.

The EB-5 program provides financing on very attractive terms to developers, largely because the investors who use it are more interested in getting a green card than in making a big return. But it has drawn fire from politicians who argue that it's vulnerable to fraud and funnels money to unworthy luxury real estate projects.

In one of the biggest examples of what can go wrong, the developer of a failed 995-room hotel development near O'Hare International Airport is expected to plead guilty this week to charges that he used the program to bilk more than 290 Chinese citizens out of $160 million.

Though Congress debated proposals to reform the visa program, which expired Sept. 30, lawmakers eventually just decided to extend it without any changes for another year.

Greenberg, meanwhile, may be up for another international adventure. He said he's pleased enough with the EB-5 program that he plans to use it again, possibly for an apartment development he plans in Lincolnshire.