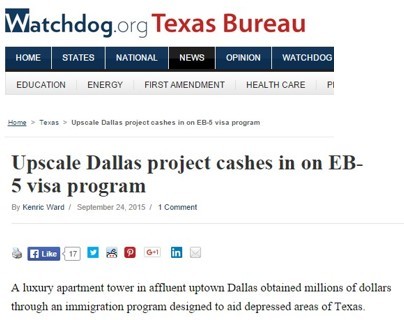 A luxury apartment tower in affluent uptown Dallas obtained millions of dollars through an immigration program designed to aid depressed areas of Texas. 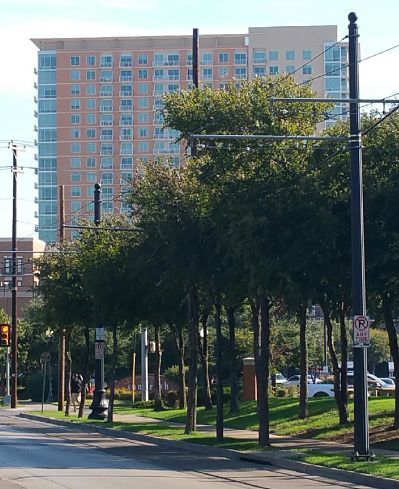 The joint venture by the city of Dallas and Civitas Capital Group secured funding from more than 100 overseas investors at $500,000 apiece. In exchange, the foreign nationals became eligible for U.S. visas and residency via the federal EB-5 program.

The buy-in would have been far steeper — $1 million per investor — if the Forest City West Village project had been located outside the federally designated Targeted Employment Area. But thanks to liberally drawn boundaries, the venture landed inside the coveted TEA.

U.S. Citizenship and Immigration Services listed the uptown neighborhood as a TEA, even though the area’s unemployment rate is a minuscule 0.8 percent and its average household net worth of $408,673 exceeds the Dallas average. The posh home of Dallas Cowboys owner Jerry Jones sits less than two miles away.

“The extreme TEA gerrymandering occurring in Dallas is unconscionable,” Shae Armstrong, an EB-5 immigration lawyer, told Watchdog.org. “It undermines the intent of the original regulations requiring that EB-5 capital be infused into rural or truly economically distressed areas.”

Developers say the 21 story tower, which includes trendy restaurants and shops such as J.Crew, will add 3,000 direct and indirect jobs to the Metroplex.

“TEA gerrymandering continues to line the pockets of wealthy urban developers while neglecting areas that need this capital the most,” he said.

Far from poverty-stricken, the McKinney Avenue corridor boasts a Ritz Carlton Hotel. Across the street and next door are Gap, Brooks Brothers and Banana Republic clothing stores, along with high-end multifamily dwellings and restaurants. Jones’ $17 million mansion is in adjacent Highland Park.

“This land would have been developed with or without EB-5,” Armstrong said. “Truly economically distressed areas such as nearby east and south Dallas could have surely used this capital.”

The Wall Street Journal exposed similar EB-5 maneuvers in upscale sections of Manhattan, where a twisted umbilical cord of census tracts was connected to meet the TEA designation.

“The incentives Congress created to direct EB-5 investment to rural areas and urban areas plagued by high unemployment have been abused,” said U.S. Sen. Patrick Leahy, a longtime proponent of the immigration program.

With sections of the EB-5 law expiring on Sept. 30, the Vermont Democrat is co-sponsoring legislation with Sen. Charles Grassley, R-Iowa, to block projects in affluent neighborhoods from landing benefits designated for high-jobless areas.

Armstrong and the More American Jobs Alliance support EB-5’s mission of using foreign capital to boost U.S. employment. He blames much of the looseness in the program on private “regional centers” that collect and disburse foreign investors’ funds with little or no public oversight.

“Let the regional center program expire and require immigrant investors to create at least 10 jobs each, per the original 1990 intent of the program,” he said.