Judge: FBI interviews of Shumlin administration in EB-5 fraud case must be unsealed 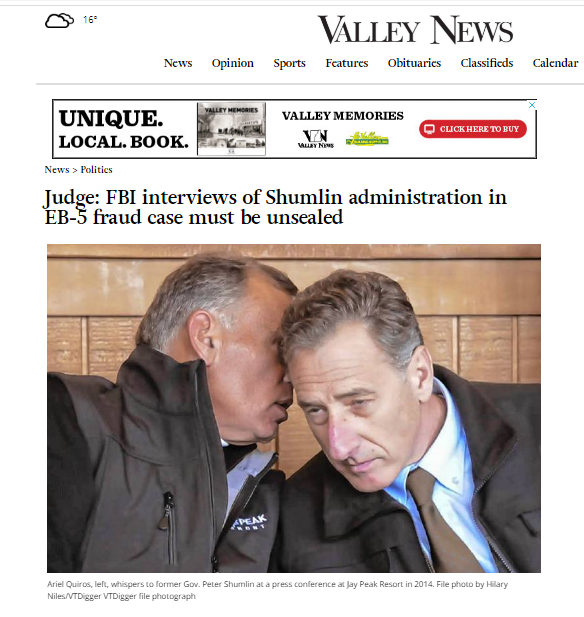 Federal Judge Geoffrey Crawford on Wednesday ordered the release of summaries of FBI interviews with former Gov. Peter Shumlin and members of his administration responsible for overseeing the fraudulent Jay Peak Resort projects.

Crawford dismissed claims by federal prosecutors that the records should remain under seal in the government’s case against former Jay Peak Resort president and CEO Bill Stenger in connection with a failed biomedical research facility project in Newport, Vt., known as AnC Bio Vermont. Ultimately, according to prosecutors, about $84 million from 170 investors for that project was misused by Stenger and his former partner, Jay Peak owner Ariel Quiros.

The office of the U.S. Attorney for the District of Vermont had already shared the sealed documents with a third party — the Vermont Attorney General’s Office, which is defending the state in a separate civil lawsuit brought by defrauded immigrant investors represented by the Barr Law Group. And, according to Crawford, Stenger’s defense had allowed attorney Russell Barr to read the files.

“These interview records are something of an open secret,” the judge wrote, adding later in his opinion, “In the conventional expression, the cat is out of the bag.”

The federal court decision is a victory for Barr and his clients, who had hoped to obtain permanent residency in the U.S. through the federal EB-5 investor visa program, which provides green cards to those who invest at least $500,000 in qualifying, job-creating projects.
Those plaintiffs have brought a negligence case against the Vermont Agency of Commerce and Community Development, as well as gross negligence allegations against two former directors of the state-run Vermont Regional Center in state civil court. The Vermont Attorney General’s Office is defending the state agency and the former officials in the case.

“Today, the countless victims of this fraudulent scheme are now one step closer to justice,” Barr wrote in an email to VTDigger responding to Crawford’s decision.

David Groff, an assistant attorney general handling the case for the state, did not respond to a request for comment.

Barr’s firm asked the federal judge to reconsider protective orders he had issued allowing the U.S. Attorney’s Office, which has a close relationship with the state Attorney General’s Office, to keep the FBI documents under wraps.

Barr alleges in the civil case that the Shumlin administration covered up the fraud at Jay Peak for a full year before the U.S. Securities and Exchange Commission shut down the scam in April 2016 and charged Quiros and Stenger with misusing $200 million in investor funds.

The U.S. Attorney’s Office adamantly opposed the unsealing of documents, including the 23 FBI interview summaries, on procedural grounds. Paul Van de Graaf, an assistant U.S. attorney and the lead prosecutor for the government, sought to make permanent three temporary protective orders that have prevented the documents from being disclosed during the discovery process in the federal case.

Crawford determined that federal prosecutors failed to show “good cause” for withholding the documents. The judge has given the U.S. Attorney’s Office seven days to redact personal information from the records and then will make the documents available through the court. Grand jury transcripts and related records will remain under seal.

Crawford’s ruling paves the way for a fuller understanding of whether the Vermont Attorney General’s Office and the Shumlin administration covered up and perpetuated the Ponzi-like scheme until the feds took action.

Since July 2014, attorneys general and officials from the state Department of Financial Regulation, the commerce agency and the governor’s office have blocked the public release of internal state communications about the case. The Vermont Journalism Trust, VTDigger’s parent organization, has filed three lawsuits against the Vermont Attorney General’s Office since 2017 seeking records pertaining to the state’s involvement in the case. Barr also has sought state records for five years in his ongoing legal battle on behalf of investors.

The records cache is vast. Documents from the FBI and IRS collected over the years “number in the millions of pages,” Crawford wrote. The Vermont Attorney General’s Office has said it holds 3 million pages. Over the course of the discovery phase in the Stenger case, the U.S. Attorney’s Office and defense attorneys agreed to the three temporary protective orders Crawford issued barring the release of documents, as is customary.
After Barr subpoenaed Stenger’s lawyers, David Williams and Brooks McArthur, for records pertaining to the investor case, the U.S. Attorney’s Office sought to permanently seal the FBI interview summaries and other records in federal court.

Crawford speculated in the ruling that if he granted the U.S. attorney’s request to keep the documents secret, the Vermont Attorney General’s Office could more easily persuade a lower court judge to deny access to the documents in the civil case brought by Barr for the investors.

The judge wrote that the basis for withholding the documents no longer exists because Stenger’s case is not going to trial. The former Jay Peak president and CEO pleaded guilty in August to one charge of making a false statement to the government. There is also no need to protect witnesses from retaliation, Crawford wrote, and there is no risk to an ongoing investigation.

Unsealing 8 years of secrets
New revelations came to light last fall when Williams and McArthur submitted hundreds of pages of records under seal, including summaries of 23 FBI interviews conducted in 2021 with former and current state officials.

On behalf of the Vermont Journalism Trust, the Cornell Law School First Amendment Clinic, ACLU of Vermont and the law firm Cornell Dolan sued for the unsealing of 600 pages of records and won.

The FBI interview summaries, however, remained under seal. In 2021, the FBI questioned Shumlin; his former chief of staff, Liz Miller; his former general counsel, Sarah London; the former commerce secretaries Lawrence Miller and Pat Moulton; and former and current commissioners of the Department of Financial Regulation Susan Donegan and Mike Pieciak.

All of these records, plus FBI interviews with the attorneys for the agencies, will be released under Crawford’s latest order. Other summaries — from Quiros, former Gov. Jim Douglas, former Shumlin chief of staff Bill Lofy and former secretary of the Agency of Administration Jeb Spaulding — will not be made available.

In response to a request for an interview, Pieciak sent a text message.

“Judge Crawford made the right decision and I am glad more key documents will soon be publicly available,” he wrote.

Williams and Brooks described the narrative arc of the FBI interviews in a filing last fall. State officials said they were under “political pressure” to continue the fraud in order to finish a hotel at Burke Mountain Resort, which Quiros owned, according to the defense attorneys.

Shumlin met with Quiros at his home in East Montpelier on New Year’s Day 2015 to talk about cost overruns and state oversight of the Jay Peak projects, Williams and Brooks wrote. Shumlin also sought information about the apparent arrest in China of a Vermont EB-5 Regional Center employee, Quiros told the feds.

A few months later, Shumlin and state officials met with Quiros again, according to the defense attorneys. This time, the Miami businessman, holding a manila folder with photographs, asked Shumlin to talk with him in private, according to FBI materials cited by Williams and Brooks.

The former governor subsequently reinstated the two projects that the commerce agency had previously suspended — the Burke Mountain hotel and the Newport biomedical facility.

Communications unsealed by the court last fall showed that state officials allowed the fraud to continue even though they knew investors would be harmed. Pieciak, the current commissioner of the Department of Financial Regulation, gave a presentation in August 2015 to Shumlin’s staff and appointees. In it, he pointed out that, because of the fraud at Jay Peak, investors in the Burke hotel and the biomedical facility would not get their money back — nor would they receive green cards.

And yet, the governor and his team pressed ahead with a plan to allow the scam to continue, records show. The projects were reinstated. Stenger was permitted to solicit dozens more foreign investors for AnC Bio Vermont and the Burke hotel. The Department of Financial Regulation held the money in escrow and the Vermont Attorney General’s Office distributed money to the contractor. The Burke hotel was completed just weeks before the feds intervened.

About 400 out of 800 foreign investors, most of whom had bought into Burke and AnC Bio Vermont, have not received permanent residency in the United States as promised through the EB-5 program.