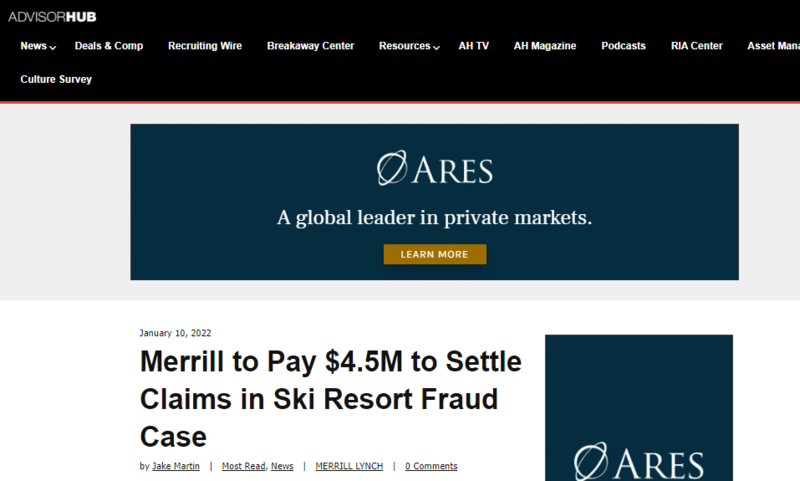 Merrill Lynch has reached a settlement with Vermont regulators over its supervision of brokerage accounts used in connection with a long-running fraud case involving a failed ski resort development known as Jay Peak, according to a statement Friday from the state’s Department of Financial Regulation.

The firm agreed to pay $4.5 million to resolve claims from the state regulators and a Securities and Exchange Commission-appointed receiver. They said Merrill’s management and oversight of accounts at issue represented “potential violations” of the Vermont Securities Act, according to a court filing on Thursday.

The Jay Peak scheme had precipitated earlier settlements, the largest by Raymond James & Associates, which in 2017 agreed to pay $150 million over its role in handling accounts tied to the failed ski resort and related real estate development. Raymond James in 2016 also agreed to pay $17 million to the Financial Industry Regulatory Authority for “widespread” and “systemic” failures in its anti-money laundering programs.

In pursuing claims against Merrill, the SEC-appointed receiver alleged that Jay Peak’s owner, Ariel Quiros, had also opened 13 accounts at Merrill as part of the financing of the projects and had unspecified “interactions” with certain entities involved in the fraud.

A Merrill spokesman declined to comment on the matter.

Merrill did not admit wrongdoing or liability in the settlement, which also bars investors from initiating or continuing any individual or class-action claims against the named parties but does not exclude actions from federal or other state governmental bodies or agencies.

The receiver’s and Vermont regulator’s investigations found the potential claims against Merrill “involve disputed facts that would require substantial time and expense to litigate,” according to the court filing.

Under the agreement, $4 million will go to the SEC-appointed receiver, and a $500,000 penalty to the Vermont regulator will also be routed to the receiver for investor restitution, according to the court filing. The settlement is subject to final approval by the U.S. District Court for the Southern District of Florida.

Around $1.2 million of the settlement would ultimately go to investors as the receiver and his attorneys would also receive $1.2 million, and Raymond James will be paid $2.1 million.
Raymond James had agreed to pay a higher settlement amount in 2017 on the condition that it could recoup some funds from future settlements with third parties.

The SEC in 2016 had filed charges of fraud against Quiros, whose son-in-law was a Raymond James branch manager, and Jay Peak president William Stenger, alleging that they and their various business entities made false statements and omissions while raising tens of millions of dollars from investors to construct a ski resort and biomedical research facility.

The SEC’s complaint alleged that Quiros and Stenger “controlled and utilized” their various businesses to defraud foreign investors who invested in certain limited partnerships under the federally created EB-5 visa program, which encourages foreigners to invest in job-creating developments in the United States in exchange for a chance to earn permanent U.S. residency.

Quiros and Stenger pleaded guilty to criminal charges in August 2020 and 2021, respectively, and are awaiting sentencing, according to an Associated Press report.