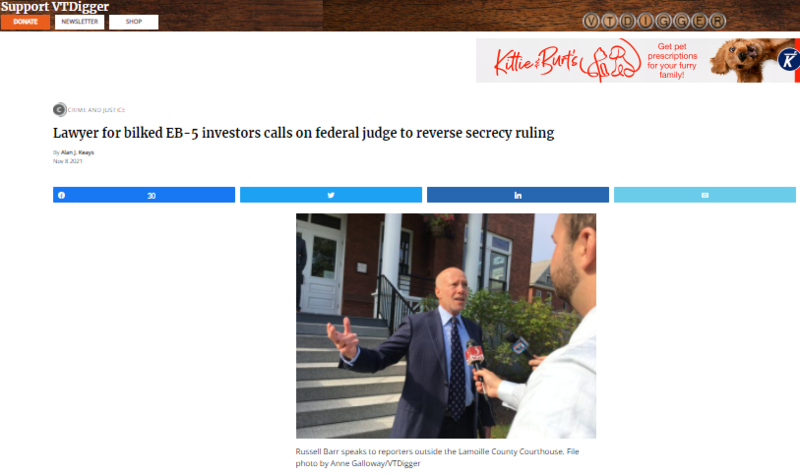 An attorney suing the state for failing to stop a fraud that left his clients out millions of dollars wants a judge to reverse a ruling that he says blocks him from obtaining evidence to help prove his case.

Russell Barr of the Barr Law Group in Stowe has filed a motion urging federal Judge Geoffrey Crawford to reconsider his decision last week that placed under wraps documents related to the largest fraud in the state’s history.

Exactly what is contained in those records remains a mystery, though federal prosecutors wrote in a filing last week seeking to keep them secret that grand jury testimony and witness statements are included among the documents.
Crawford’s decision shields from Barr and the public those documents that could reveal more about the role that the administration of former Gov. Peter Shumlin may have played in the fraud.

Millions of documents related to the fraud case have been kept secret for years by the Vermont Attorney General’s Office, citing an exception to the state’s public records law for pending litigation, which includes Barr’s lawsuit against the state as well as the ongoing federal criminal prosecution of the developers who led the projects at the center of the scandal.

Barr’s recent filing comes in the federal criminal case brought against Bill Stenger, Jay Peak’s former CEO and president, and two of his former business partners, in connection with a failed biomedical research facility project in Newport, known as AnC Bio Vermont, that never got off the ground.

Barr, in his civil lawsuit brought on behalf of foreign investors against the state, had subpoenaed records that Stenger’s lawyers had received from federal prosecutors in the criminal case against their client.

The Vermont Attorney General’s Office had already thrown up roadblocks to Barr from obtaining those records as part of his lawsuit against the state and former state employees, fighting his attempts to depose top state officials who had oversight roles of the state-run Vermont EB-5 Regional Center when prosecutors and regulators allege the fraud took place.
In that civil lawsuit, Barr claims the state failed to properly oversee projects led by Stenger and Ariel Quiros, Jay Peak’s former owner, and helped to perpetuate fraud.

As a result, according to Barr, his clients have lost not only millions of dollars, but also their hopes of receiving green cards and permanent U.S. residency that they had sought from their investments through the federal EB-5 visa program.

Barr, in his latest filing, calls on Crawford, who is presiding in the federal criminal case, to drop the protective order and allow him to move forward with obtaining the subpoenaed records from Stenger’s lawyers.

Phone and text messages sent to Stenger’s attorney on Friday and Monday were not returned.

Federal prosecutors declined comment.
Barr, in his six-page filing, laments the lack of transparency he has encountered since bringing his lawsuit on behalf of the foreign investors more than four years ago.

He wrote that the protective order granted last week only reinforces the strategy of secrecy that has marked the response to the EB-5 financial scandal by government officials to his clients.

Those foreign investors poured millions of dollars into the construction of a hotel and conference center at Burke Mountain ski area, the last project led by Stenger and Quiros, all while the state was aware of the fraudulent activities of the developers, documents show.

Barr wrote that “material information and evidence, central to [his clients’] investment choices and immigration prospects, were purposefully obfuscated and not disclosed,” asserting such information would have “short-circuited any would-be investment at Jay Peak.

“This obfuscation practice continues to present day,” Barr wrote. “Given that these crimes targeted their money, and derailed their immigration processes, the Plaintiff-Investors should have some priority as victims. The subpoena seeks information directly related to the Plaintiff-Investors’ loss, and as such, reconsideration is sought.”

In addition, according to Barr’s filing, federal prosecutors have failed to provide the required “good cause” for a party seeking such a blanket protective order.

Barr wrote in the filing that “the ‘good cause’ standard exists because blanket protective orders have serious ramifications: effectively chilling speech and inhibiting public oversight of governmental action.”

Stenger, Quiros and William Kelly, a longtime friend and advisor to Quiros, have all pleaded guilty to federal crimes associated with the collapsed AnC Bio Vermont project. Those developers, despite raising more than $80 million from over 160 foreign investors, had done little to bring that project to fruition before regulators eventually shut it down.
All three developers are awaiting sentencing, which are expected to take place early next year.

It’s not clear when Crawford will issue a ruling on Barr’s reconsideration request. It’s also not known whether the judge will call for a hearing to air the views of all the parties involved to voice their positions on the matter.