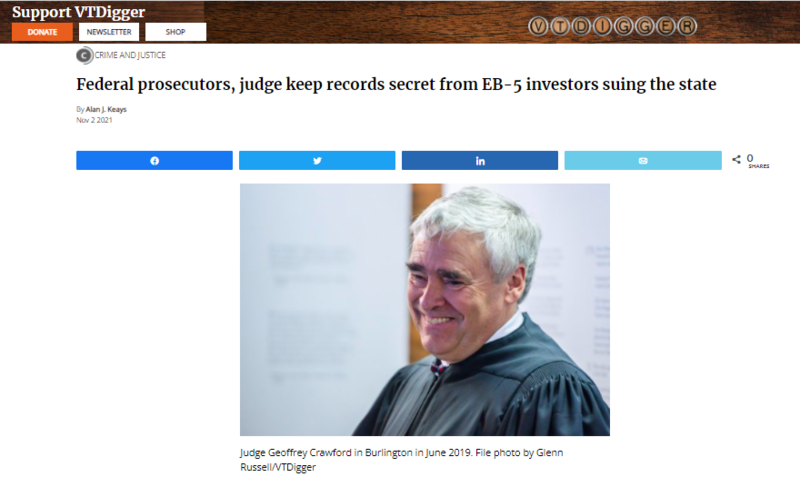 Federal prosecutors on Tuesday called on a judge to keep under wraps evidence, including grand jury testimony and witness reports, they had collected as part of their criminal investigation into the largest fraud in the state’s history.

The decision marks the latest blow for transparency as investors seek to hold the state to account for allegedly perpetuating the fraud. Documents show that the Vermont Attorney General’s Office, the Shumlin administration and securities regulators received and spent money from investors in the Burke Mountain ski area project, knowing that the immigrant investors would lose $500,000 each — as well as their hopes for green cards.
The legal move blocks foreign investors who have been bilked out of millions of dollars from obtaining information that could benefit their lawsuit against the state and its former employees for their role in the massive financial scandal that played out over nearly a decade in Vermont’s Northeast Kingdom.

Prosecutors moved to keep evidence under wraps after Russell Barr, the attorney for the defrauded investors who is suing the state, subpoenaed attorneys for Bill Stenger, Jay Peak’s former president and CEO.

The subpoena calls on Stenger’s defense team “to produce all documents produced by any government agency or third party” in the criminal case against their client.

Stenger earlier this year pleaded guilty to criminal charges in connection with a failed biomedical facility in Newport known as AnC Bio Vermont. That project never got off the ground despite raising more than $80 million from more than 160 foreign investors through the federal EB-5 visa program.

Stenger is awaiting sentencing that is expected to take place early next year under a plea deal that could send him to prison for up to five years.

Assistant U.S. Attorney Nicole Cate is the prosecutor in the criminal case brought against Stenger and his former business partners turned co-defendants: Ariel Quiros, Jay Peak’s former owner, and William Kelly, a close adviser to Quiros. Cate filed a motion this week seeking a protective order to block Stenger’s attorneys from providing the materials to Barr called for by the subpoena.

Those materials include grand jury testimony and transcripts of witness reports from unnamed parties that have never been made public.

“The government’s view is that this subpoena is an improper attempt to obtain federal criminal investigative file materials outside the prescribed process,” Cate wrote in the three-page filing.

Cate added that she could “more fully” address the matter involving the subpoena in a future filing but wanted Crawford to grant prosecutors’ immediate request for the protective order to block the release of the subpoenaed material from Stenger’s attorneys to Barr.

Cate wrote that Stenger’s attorneys did not object to the prosecution’s bid for a protective order.

Cate, through a spokesperson, declined to comment Tuesday. Brooks McArthur, an attorney representing Stenger, could not immediately be reached Tuesday for comment.

Crawford, by granting the request, prevented the release of records revealing the scope of the Shumlin administration’s direct involvement in the scandal, further backing the Vermont Attorney General’s Office’s efforts to shield current and former state officials from embarrassing disclosures and possible financial liability.

The U.S. Attorney’s Office in Burlington has worked closely with the Vermont Attorney General’s Office in the criminal prosecution of former Jay Peak CEO Stenger and his business associates.

The Attorney General’s Office attempted to block the release of documents in the criminal case that showed the complicity of state officials in the fraud. Those records were released after the Vermont Journalism Trust, the parent organization of VTDigger, sued.

A smattering of documents — about 600 pages out of millions on file with the U.S. Attorney’s Office — revealed that lawyers for the state not only knew about the Ponzi-like scheme but also took money from new investors and managed the construction of Burke Mountain, the final project. More than a dozen state employees in the administration of Gov. Peter Shumlin, including some in the Vermont Attorney General’s Office, the commissioner of the Department of Financial Regulation and officials with the commerce department, were either aware of or participated in the state’s perpetuation of the fraud, according to the documents.

Barr represents EB-5 investors who invested in projects headed by Stenger and Quiros through the federal visa program.

Barr has asserted in the lawsuit against the state that state officials charged with overseeing the projects failed to act to stop the fraud either because they were in on it or as a result of negligence.

The Office of the Vermont Attorney General, representing the state against Barr’s lawsuit, has been fighting the Stowe attorney’s bids to conduct depositions of state officials and obtain documents related to the state’s alleged involvement in the fraud ever since the filing of the lawsuit four years ago.

The state-run Vermont EB-5 Regional Center had been charged with monitoring the projects headed by Stenger and Quiros.
Those developments included new hotels and condos at Jay Peak, a hotel and conference center at Burke Mountain, and two projects in Newport, including the proposed biomedical research facility that was brought to a halt by federal and state regulators shortly after breaking ground.

Barr has argued in his lawsuit that without state oversight of the projects headed by Stenger and Quiros, his clients would never have invested in the developments.

Stakes are high for the state as Barr has termed the potential damages that could be awarded to his client as substantial.

Federal prosecutors have not filed any criminal charges against any state official in the case, alleging that they were duped by Quiros, Stenger and other project officials who they say were the ones behind the fraud scheme.

In addition to Stenger, Quiros and Kelly have pleaded guilty to federal crimes related to the AnC Bio Vermont project. They, too, are awaiting sentencing.