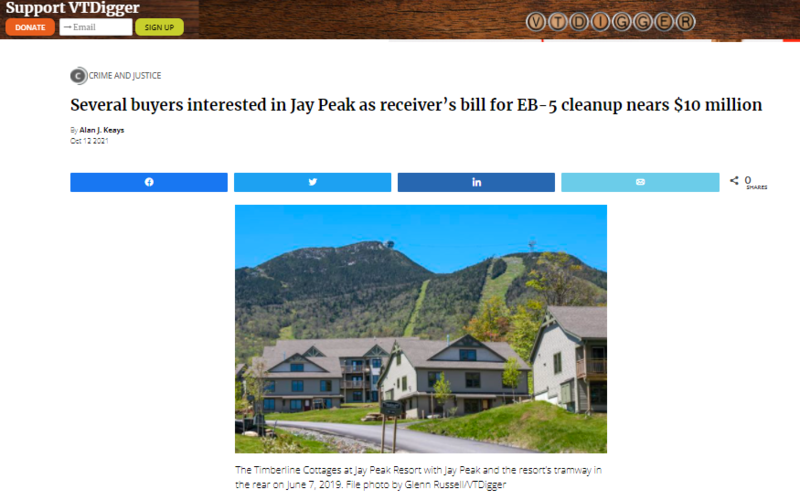 The court-appointed receiver overseeing the Jay Peak ski resort is getting closer to selling the resort, located close to the Canadian border, as it looks to emerge from a scandal that almost sent it into bankruptcy.

Michael Goldberg, tapped by a federal judge more than five years ago to manage the scandal-ridden ski area, is seeking court approval to receive more than $700,000 to cover the latest costs and expenses for cleaning up the financial mess he inherited when he took the job.

Since the receivership began in April 2016, fees and expenses paid to Goldberg and others who have assisted him total nearly $10 million.
The information about the sale of Jay Peak and the new fee request were among Goldberg’s recent court filings related to his work as receiver.

The sale process for Jay Peak had been put on hold when the Covid-19 pandemic broke out, but it’s now moving ahead, with potential buyers lining up, according to Goldberg.

Over the years, a range of values for the Jay Peak ski resort has been discussed. The U.S. Securities and Exchange Commission indicated during a May 2016 court hearing that it valued Jay Peak at $42 million, based on average profits.

Meanwhile, an attorney for the receivership has estimated Jay Peak’s value at $90 million to $100 million.

Goldberg has hired Houlihan Lokey Inc., an investment banking and financial services firm headquartered in Los Angeles, to assist in marketing the resort and in the sale process.
He wrote that he has been “actively engaged” in sale discussions with “several interested parties whereby draft forms of asset purchase agreements” have been exchanged. He said the goal is to complete the transaction “as soon as a buyer is identified” and a purchase agreement is finalized.
He did not identify any of the potential buyers and could not be reached Tuesday for comment.

Jay Peak officials have said little about the sale process, including what entities may be interested in buying the resort.

Proceeds from the sale are expected to be distributed on a “pro-rata basis” to EB-5 immigrant investors who put up at least $500,000 each to finance job-creating upgrades at the resorts. The investors would have qualified for green cards — U.S. residency — if the jobs were actually created.

However, according to civil lawsuits filed by the state and federal regulators in 2016, Ariel Quiros, then Jay Peak’s owner, and Bill Stenger, at the time the resort’s CEO and president, misused $200 million of investor funds raised through the federal EB-5 visa program.

The investments were to pay for massive upgrades at Jay Peak, including three hotels, three condo complexes and a water park.

The developers also proposed projects in other communities in northern Vermont, including a hotel and conference center at Burke Mountain ski area and a biomedical facility in Newport.

Stenger and Quiros have since reached financial settlements in those civil actions, with neither admitting or denying the allegations against them.

Quiros and Stenger and two of their associates were indicted on criminal charges in May 2019 by a federal grand jury in Vermont, including fraud and making false statements to the government in connection with a separate EB-5 project.
The charges stem from the failed Newport biomedical research facility, AnC Bio Vermont, that authorities said was “nearly a complete fraud.” Stenger and Quiros have since pleaded guilty to criminal charges and are awaiting sentencing.

Goldberg has also submitted his 10th fee request since his receivership began, seeking $730,678 to cover Sept. 1 to July 31. He has been submitting fee requests roughly every six months related to his management of the properties at the center of the EB-5 scandal, including the Jay Peak and Burke Mountain ski resorts.

Including the latest request, the fees and expenses associated with the receivership total $9,839,583.