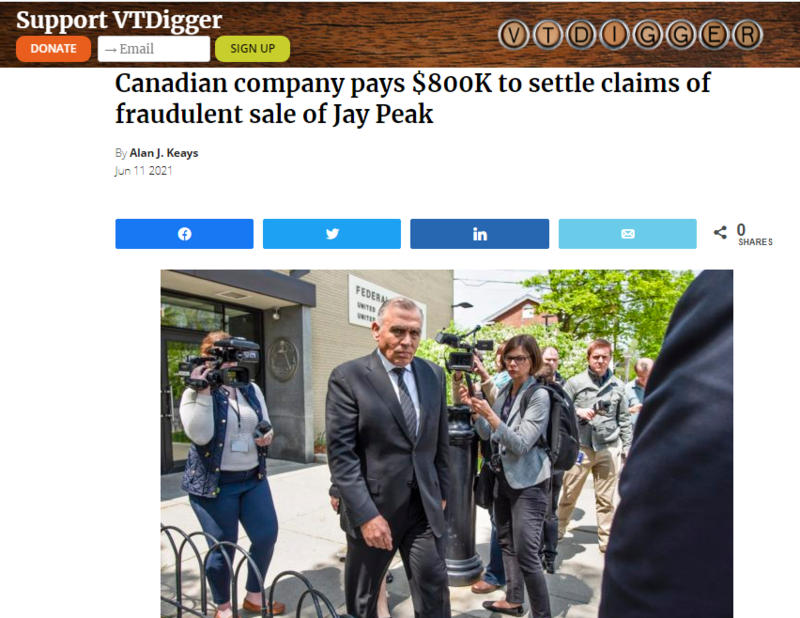 Jay Peak Resort’s receiver has reached an $800,000 settlement in a lawsuit accusing the former Canadian owners of the ski area of engaging in the fraudulent sale of the property, which eventually led to a massive financial scandal.

However, not much of that money will benefit the foreign investors allegedly bilked by Ariel Quiros, the Miami businessman who bought the Jay Peak ski resort in northern Vermont.

The settlement, reached quietly earlier this year, ended a legal battle that started in April 2017 when the lawsuit was filed against the Canadian company, now known as Saint-Sauveur Valley Resorts.
The lawsuit accused Saint-Sauveur of fraudulently accepting $18 million in investor funds raised through the federal EB-5 visa program as part of Quiros’ payment for the ski resort. That money from foreign investors for the Tram Haus Lodge and Hotel Jay developments at the resort was legally bound to be held in separate escrow accounts for each project.

However, the Miami businessman used EB-5 money for the purchase — instead of keeping the money in escrow for the hotel and Tram Haus Lodge.
Saint-Sauveur, then known as Mont Saint-Sauveur International Inc.,  knew it wasn’t supposed to accept the money but did so anyway, according to the lawsuit. Saint-Sauveur denies the claim.

Quiros and his former business partner Bill Stenger — Jay Peak’s past CEO, who had earlier worked for Mont Saint-Sauveur International — then brought in new investors to backfill funding for the two hotel projects.

Over the years, more than 800 foreign investors put money into projects headed by Quiros and Stenger through the federal EB-5 visa program. Foreign investors who put at least $500,000 into a qualified job-creation project are eligible to receive green cards — good for permanent U.S. residency.

Many of the investors have been left out not only their investments due to the fraud scandal and the lack of job creation, but also their shot at receiving green cards.
Investors believed they were putting money into the first construction projects at Jay Peak, unaware Quiros had used their money to buy the resort, court filings said.

$57,600 to the estate of Keith Miller, a Massachusetts attorney involved in the initial filing of the case who has since died.
$151,200 to a Florida law firm, Levine Kellogg Lehman Schneider and Grossman, which assisted the receiver after taking over the case.
$40,000 to Joshua Simonds, a Vermont attorney involved in bringing the lawsuit on behalf of investors.
$151,200 to the Florida law firm Akerman LLP, where Goldberg works
Of the remaining $400,000, Raymond James & Associates will get $300,000. That’s the financial services firm Quiros used. It had earlier reached a $150 million settlement with the receiver for its role in the financial scandal.

As part of that earlier settlement, Raymond James was entitled to 75% of all proceeds from future settlements with third parties where the proceeds are not going directly to defrauded EB-5 investors.

The remaining $100,000 will go to the receivership itself to help pay the expenses of overseeing Jay Peak and Burke Mountain, another ski resort Quiros purchased. It’s now managed by the court-appointed receiver as well.

Neither Goldberg nor David Pocius, a Burlington attorney representing Saint-Sauveur, could be reached Friday for comment.

The settlement documents do state that, as part of the agreement, Saint-Sauveur is not admitting to any wrongdoing.

Past settlements the receiver reached in the sprawling fraud case have been posted on a website he set up to keep investors informed. So far, the settlement with Saint-Sauveur has not been posted on the website, though documents related to it have been filed in court.

According to filings, in June 2008, Quiros negotiated a transfer of EB-5 money with Saint-Sauveur officials, moving the assets of Jay Peak — including cash from immigrant investor accounts set aside for the construction of Tram Haus Lodge and Hotel — to his company, Q Resorts.

That transfer, the filings stated, occurred within hours of Quiros’ purchase of the resort.

Before the transfer, according to court filings, Quiros had asked Saint-Sauveur to open accounts at Raymond James for EB-5 money that was set aside for the Tram Haus Lodge and Hotel Jay project.

Lawyers for Saint-Sauveur sent a letter to Raymond James, copied to Quiros and Stenger, saying that money for those EB-5-funded projects “may not be used in any manner” to pay for Jay Peak, a court filing stated. Attorneys for the investors have said that letter was a “protect your ass” document, with the Canadian firm knowing all along what was actually taking place. Lawyers for Saint-Sauveur denied the claim.

A judge had earlier dismissed parts of the lawsuit, according to filings by Saint-Sauveur, “and characterized the damage allegations as to the surviving claims as ‘sparse.’”

After the sale of the resort, Quiros and Stenger brought in more than $350 million in investor funds through the EB-5 program before federal regulators caught up with them years later.

They had built hotels and three condo complexes at Jay Peak, purchased Burke Mountain, where another hotel was built, and raised $67 million for a biomedical facility in Newport that never got off the ground.

In April 2016, according to court filings, the Securities and Exchange Commission alleged that Quiros and Stenger misused $200 million of the EB-5 money raised for the projects. Both Quiros and Stenger later reached monetary settlements with the SEC, with Quiros agreeing to surrender $81 million in assets, including both Jay Peak and Burke Mountain ski resorts.

The resort and other properties tied to development projects led by Stenger and Quiros went into receivership in April 2016 when the Securities and Exchange Commission brought its civil case against the two men, and a slew of lawsuits from upset investors followed.

In May 2019, federal prosecutors brought criminal charges against Quiros and Stenger and two of their associates in connection with the failed biomedical facility project in Newport, known as AnC Bio Vermont, and termed by regulators “nearly a complete fraud.”

Quiros has since reached a plea deal in that case and is awaiting sentencing. Stenger has maintained his innocence and is set to stand trial in the fall.