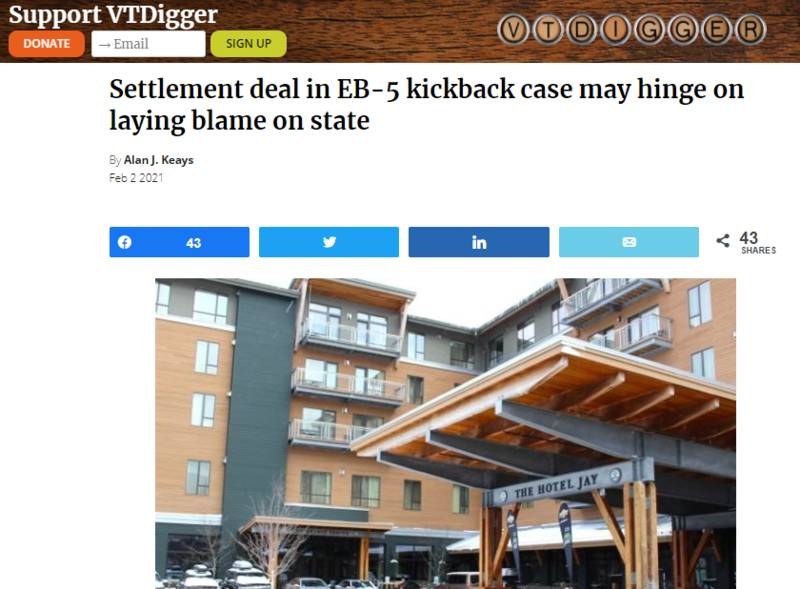 An attorney at the center of an alleged “kickback” scheme to steer immigrant investors toward the fraudulent Jay Peak projects told a judge he is willing to resolve the case by agreeing to testify against the state in a separate lawsuit.

The case has come to a head in part because Shen Jianming, an immigration attorney from New York state, has no money to defend himself. Immigrant investors sued him two and a half years ago, alleging he took payoffs from the Jay Peak developers for each new EB-5 investor he lured into a biomedical facility project in Newport.

The investors allege that Shen had a built-in conflict of interest. He was supposed to be representing them as they sought green cards through the EB-5 program, but at the same time, Shen was taking kickbacks from Bill Stenger, the CEO and president of Jay Peak.

Shen has maintained that state officials knew what he was doing all along because the state-run Vermont EB-5 Regional Center was responsible for overseeing and monitoring the Jay Peak projects.

The lawsuit against Shen alleges he took more than $1.25 million in kickbacks from the Jay Peak developers in return for bringing investors to the Jay Peak projects led by Stenger and Ariel Quiros, Jay Peak’s owner.

Shen, speaking Monday during a video court hearing in federal court in Burlington, told Judge Christina Reiss that about two months ago, he received a call from Barr about trying to settle the lawsuit against him.

“Mr. Barr, who was trying to talk me into a kind of deal, indicated that he would be happy to work with me, if I could testify, or make a statement, saying that I was relying on the government of Vermont,” Shen told the judge.

Shen added that he had been relying on state oversight of the projects and was willing to provide that statement.

“But, still I find it is not good enough for me to drop this,” he said.

Shen said he is representing himself in the case because he ran out of money to pay his former  attorney, Andrew Montroll of Burlington.

Chandler Matson, an attorney with the Barr Law Group, told Reiss that indeed there had been talks to try to resolve the case, but no deal had been reached.

“You’re always looking to resolve the case. Trials are expensive, time-consuming,” Matson said, later adding, “We’re doing everything we can to figure out some resolution, so that we can say to our clients we did the best job we could for you.”

Reiss said she questioned whether a settlement is in the works, since jury selection for a trial in the civil case is set for March. With all the precautions needed as a result of the Covid-19 pandemic, she said, a great deal of work for the court goes into preparing for a trial.

“Now’s the time to settle,” the judge told the parties. “Otherwise, we’re going to try the case.”

“It’s up to the plaintiffs,” Shen replied.

The investors suing Shen say they would not have put money into Jay Peak projects had he, their attorney, warned them about accusations of fraud related to the projects that had surfaced in 2012 and again in 2014.

The legal action states that, even as Shen was bringing investors to the Jay Peak projects, he did not inform the immigrant investors he was also getting a payoff from Stenger in addition to the legal fees he charged those investors to help with their immigration paperwork.

Barr confirmed that his firm had asked Shen to provide testimony or a statement about his reliance on the state’s oversight of Jay Peak’s projects.

“We just want him to tell the truth,” Barr said.

Shen’s testimony or statements could prove useful in a separate lawsuit Barr has brought on behalf of investors against the state and state officials.

That lawsuit, pending in Lamoille County, accuses state officials of at best negligence and at worst covering up action by the Jay Peak developers in overseeing their projects from 2008 to 2016, providing the developers an opportunity to bilk more than 800 investors.

A trial court judge dismissed that lawsuit in 2018, but the Vermont Supreme Court revived many of the claims in 2019, including one involving gross negligence on behalf of the state and of former officials who led the Vermont EB-5 Regional Center.

The U.S. Citizenship and Immigration Service, which runs the national EB-5 green card program, has already shut down the Vermont EB-5 Regional Center. USCIS cited the state’s negligence and material misrepresentations made by Vermont officials in shuttering that state-run program in 2019. The state is appealing that decision.

Federal and state regulators brought civil fraud charges against Stenger and Quiros in 2016 that were tied to the Northeast Kingdom developments.

The two developers eventually reached monetary settlements, with Quiros paying by the far most, agreeing to surrender an estimated $81 million in assets, including the Jay Peak resort and the Burke Mountain ski area, which he also owned.

In addition, the two developers, as well as two of their associates, were indicted in May 2019 on federal fraud and money-laundering charges tied to one of their EB-5 projects, the construction of a biomedical research facility in Newport known as AnC Bio Vermont.

Quiros has since reached a plea deal and is awaiting sentencing, where he faces up to eight years in prison. Stenger has pleaded not guilty to the criminal charges against him, with a trial set for this October.