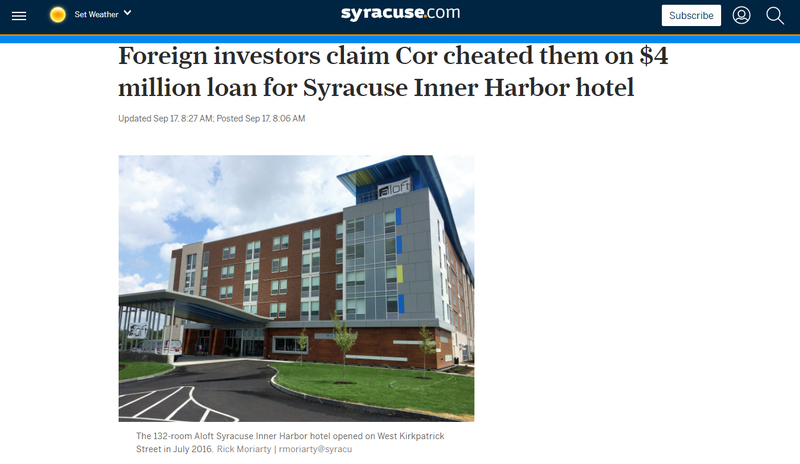 A company representing foreign investors has filed a lawsuit claiming the partners of Cor Development Co. cheated them out of $4 million loaned by the investors for the construction of the Aloft hotel in Syracuse’s Inner Harbor.

The Aloft Syracuse Inner Harbor, which opened in July 2016, was the first project in Cor’s planned $350 million development of formerly state-owned land around the harbor.

In a lawsuit filed Aug. 19 in state Supreme Court, a limited partnership representing foreign investors claims that a Cor company and its owners failed to repay the loan, which came due a year ago. The lawsuit also accuses Cor principals and their Syracuse attorneys of shielding the company’s assets – namely, the hotel – under a different limited liability company to avoid paying.

The company that borrowed the money, Cor Inner Harbor Co. LLC, has no assets and no ability to pay, according to the lawsuit. The $11 million Aloft hotel property is owned by Cor West Kirkpatrick Street Co. LLC., city property records show.

Syracuse attorney David Temes, who represents the investment partnership, did not respond to a request for comment. Albany attorney Christopher Buckey, who represents all the defendants, declined to comment on details of the case but said the lawsuit was unfounded.

"This lawsuit is patently meritless and we are looking forward to vigorously defending it in court,'' Buckey said.

If Cor defaulted on the Aloft loan, it has company in the hotel industry. Thanks to the coronavirus pandemic, nearly one hotel in four is behind on its debts. Some 23.4% of hotels were at least 30 days delinquent as of July, according to a report by data firm Trepp.

The lawsuit is unrelated to criminal cases involving Cor executives Steven Aiello and Joseph Gerardi, who were convicted in 2018 of fraud and conspiracy in connection with the company’s business dealings with New York state. Both men have appealed the convictions and are free while their appeals are under review.

The lawsuit was brought by Inner Harbor Phase 1 L.P., a limited partnership established by a Rochester company that pools money from foreign investors trying to obtain green cards to reside in the United States by investing in projects that create jobs. The Rochester company, Empire State EB-5 Regional Center LLC, arranges investments on behalf of foreign citizens participating in the so-called EB-5 visa program.

The $4 million was loaned to Cor Inner Harbor in installments between September 2014 and February 2015, according to the lawsuit. Construction of the 132-room hotel began in July 2014 and finished up two years later.

At the time, the minimum investment for individuals in the EB-5 program was $500,000. It’s not clear from the lawsuit how many investors pooled money for the Cor project, or what countries they were from. The lawsuit also does not state whether they were successful in gaining U.S. residency.

According to the complaint, the Mannion Copani firm established an escrow account in which to hold the $4 million loan, which was to be disbursed to Cor Inner Harbor. Instead, the lawyers allegedly released the money to a different Cor entity, Cor West Kirkpatrick Street, which owns the land and the hotel that was built on it.

Mannion Copani allegedly informed the lender that nothing in writing obligated Cor West Kirkpatrick Street to pay the debt, the lawsuit says. Inner Harbor Phase 1 is asking the court to order repayment of the $4 million plus punitive damages, according to the complaint.

The Aloft Hotel is worth $10.72 million, according to city assessment records. Its parking lot across the street is worth $760,000, the records show.