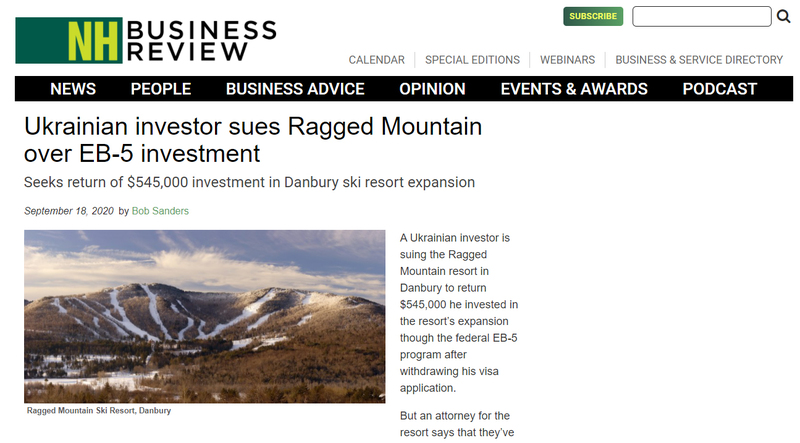 A Ukrainian investor is suing the Ragged Mountain resort in Danbury to return $545,000 he invested in the resort’s expansion though the federal EB-5 program after withdrawing his visa application.

But an attorney for the resort says that they’ve already spent that money, that they are under no obligation to repay it for another five years, and they can’t right now because of a cash crunch due to the pandemic.

At the center of the lawsuit, filed Sept. 3 in U.S. District Court in Concord, is the complicated EB-5 visa program. At the time, the program, run by the Department of Homeland Security, granted green cards to those who invested $500,000 in approved projects located in rural areas or in places with high unemployment, if they can show the investment will result in at least 10 jobs. (Last year the federal government upped the required investment to $900,000).

But the program has been the subject of fraud investigations nationally, including a major scandal involving the Jay Peak ski resort in Vermont.

Ragged Mountain qualified for the program because of its rural location, and won approval for a $35 million expansion under the program in 2013

Some $24.4 million of that money was for expanding and upgrading the ski resort, by adding a new ski lift, snowmaking equipment and enhancing the resort’s summer activities, according to the New Hampshire EB-5 Regional Center website. The rest – $10.6 million – was for Ragged Mountain Resort Development Inc.’s construction of a hotel and condominium as well as a spa facility, retail shop and expanded rental area and administrative offices.

The latter was the ongoing project Oleksandr Krylov invested in when he sent off $545,000 (the added $45,000 was a fee charged by the EB center) in December 2015. He followed up with a petition required under the EB-5 program in January 2016 to get his green card.

But last September, he notified the resort that he intended to withdraw that petition for “reasons not relevant to this instant case” and wanted his money back. In January, he sent an affidavit confirming that the petition was withdrawn.

Krylov’s Florida attorney, Olesya Trayber, said she was told that they could not get the money because of the Covid-19 crisis, which shouldn’t make a difference, she said, since that money should be escrowed. Trayber would not say why Krylov withdrew his petition.

But Mona Shah, an attorney who represents Ragged Mountain said that the visa application shouldn’t make a difference. Like any investor, Krylov agreed to put his money at risk, she said.

“If anyone can pull out their money whenever they wish, they risk the whole project, and the jobs don’t get created. It’s not just an immigration program. It is a business deal.”

The resort would pay back the money if it could, she said, but “we don’t know what is coming this winter. Everybody is nervous and wants to hold on to cash.”

The company that runs the resort – RM Management and Operations LLC – did get some cash: between $350,000 and $1 million in the federal Paycheck Protection Program funds and more than $112,000 from New Hampshire’s the Main Street Relief Fund. Getting that Main Street support means the company is anticipating a major revenue drop even after the PPP funding.

But the entities being sued are NH Mountain LP (formerly the NH Ragged Mountain Resort Investment Limited Partnership) and the New Hampshire EB-5 Regional Center. The phone number listed on the website of the EB-5 center is no longer in service, but the site says the center was set up by Pacific Group, which has a common ownership with Pacific Group resorts, the Utah-based company that runs Ragged Mountain. Calls to Ragged Mountain itself were referred to Pacific Group and Shah.

The EB-5 program came under scrutiny in New England after federal officials filed fraud charges against the owners of the Jay Peak ski resort in Vermont, where the developer was accused of misusing $200 million of investor.

But Shah insist that Ragged’s money is going to where it is intended and that the program is fulfilling the purpose.

“It is really a way to help those in rural areas,” she said. “How many people are going to invest in a small mountain in New Hampshire if it wasn’t for this program? But the program has to have rules, and just because you realize you aren’t going to get a green card for whatever reason, doesn’t mean you can suddenly get your money back.”