1,237 homes will pay extra for share of city services 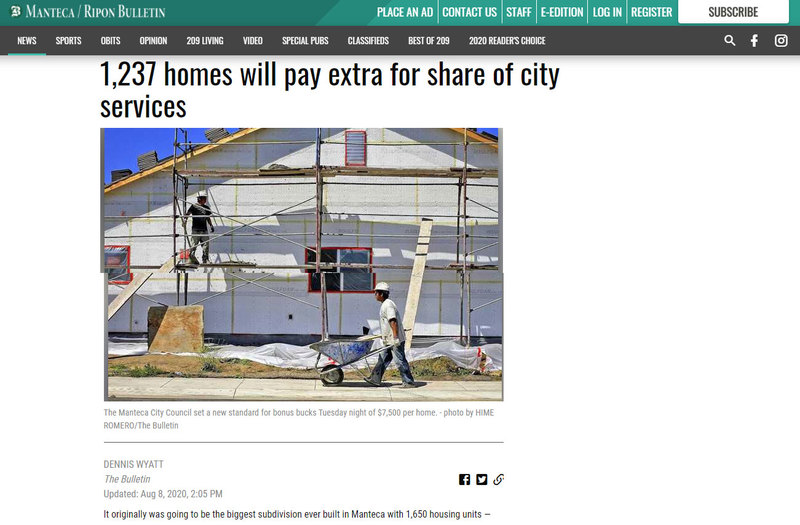 The Manteca City Council set a new standard for bonus bucks Tuesday night of $7,500 per home.

It originally was going to be the biggest subdivision ever built in Manteca with 1,650 housing units — including apartments and townhouses — at the western end of Woodward Avenue across from the gated Oakwood Shores neighborhood.

It was also once viewed as a way for as many as  47 investors, their spouses, and children not yet 21 years of age to gain visas for permanent United States residency by creating construction jobs through the EB-5 Visa program.

The clock ran out on the program and Next Properties based in Alamo never turned a shovel of dirt — though they did erect a sign saying that the Trails of Manteca was coming soon — after gaining approval for the project nine years ago.

The property owned by a Walnut Creek firm has a much better chance of being developed now that a Manteca-based group led by Toni Raymus of Raymus Homes is pursuing a modified project dubbed “Manteca Trails.”

The reduction in dwelling units will put less pressure on Woodward Avenue, the only way to access the project giving it is hemmed in by surrounding development that backs up against waterways connected to the San Joaquin River as well as being bordered on the south by a dry levee critical for secondary flood protection.

Also higher density housing such as apartments are typically placed near commercial. The closest planned commercial is more than a mile away.

The development agreement already in place for the 1,650 homes is being modified slightly for the terms of what is the city’s first “city services fee” charged to new homes.

The concept is to have new homes being built to pay for the gap between the pro-rated cost of providing services such as police and fire protection against future revenue the occupants of homes will generate via property and sales tax among other sources of income.

The original development agreement had the owners of smaller homes charged more than those  living in larger homes. It was based on assumptions each home, regardless of the size of the dwelling and lot, would create the same demand but the bigger home would pay more property taxes and based on the income needed to buy larger homes have more spending that would be subject to sales tax.

That is contrary to the stated goal of the city — as well as that of the local developers now involved with Manteca Trails — to create more affordable at-market housing opportunities..

Each home will now be assessed a flat $69 annually to help cover public safety needs instead of various rates.

Manteca Trails plans to use traditional financing sources to develop the project.

Next Bay had hoped to raise $23.5 million through the EB-5 Visa Program aimed to lure immigrant investor.

That’s shorthand for the United States Citizenship and Immigrant Service Employment-Based Immigration Fifth Preference Investor and Visa Program. The program has been in place since adoption of the Immigration Act of 1990.

The minimum qualifying investment in the United States is $1 million for an investor to gain permanent residency. However, in high unemployment areas such as Manteca was at the time the federal government allowed the program to be applied to the project that threshold is dropped to $500,000. That means legal firms that specialize in working with foreign nationals to access the program could have used the Trails of Manteca as a means to help up to 47 foreign  investors and their qualifying family to obtain permanent United States residency.

The Manteca Planning Commission will consider the development agreement changes when they meet remotely Tuesday at 7 p.m.