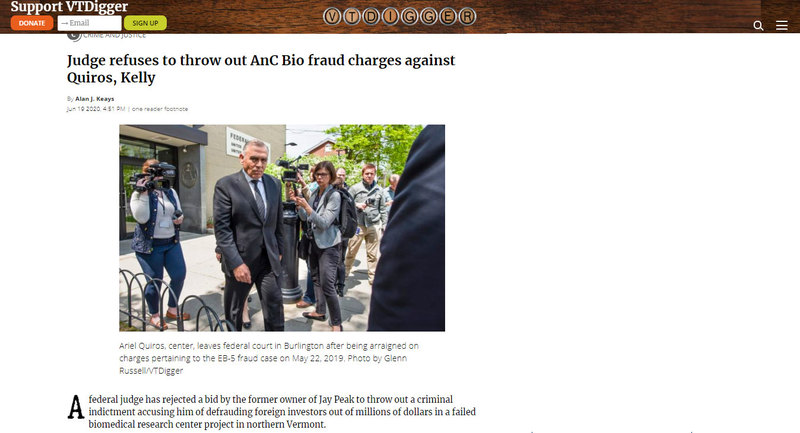 Ariel Quiros, center, leaves federal court in Burlington after being arraigned on charges pertaining to the EB-5 fraud case on May 22, 2019.

A federal judge has rejected a bid by the former owner of Jay Peak to throw out a criminal indictment accusing him of defrauding foreign investors out of millions of dollars in a failed biomedical research center project in northern Vermont.

Ariel Quiros, who was indicted in May 2019 along with his business partners, had contended in a filing submitted earlier this year that federal prosecutors had used privileged information to secure that indictment.

In his motion to dismiss, Quiros specifically contended that in investigating the criminal case prosecutors used email communications he had years ago with an attorney as part of a civil enforcement action brought against him by the U.S. Securities and Exchange Commission.

William Kelly, a former key adviser to Quiros also charged in the same indictment, filed a similar motion to have the criminal charges against him thrown out, making a similar argument.

Judge Geoffrey Crawford, in a 20-page ruling released this week, wrote that after a court-appointed receiver seized Quiros laptop in connection with that earlier civil action, Quiros failed to raise the matter regarding the confidentiality of the emails on the computer.

“Through a process accepted by both sides, privileged material on the Quiros laptop was identified and the remaining emails were released to the receiver and to the other parties to the litigation,” Crawford wrote in his ruling.

“At that point the cat had clearly left the bag,” the judge wrote. “Since the emails were no longer confidential, Quiros cannot satisfy the confidentiality requirement for maintaining the privilege in this case.”

Crawford cited the same reasoning in rejecting Kelly’s request to have the criminal charges against him tossed out.

“Similarly, Kelly failed to take steps necessary to preserve his privilege after the receiver obtained his materials,” Crawford wrote.

“If the receiver could make use of the emails in his civil lawsuits against defendants Quiros and Kelly,” the judge added, “the Government cannot be precluded from using the same email in the criminal prosecution.”

Quiros, Kelly, and Bill Stenger, Jay Peak’s former CEO and a president who was also a business partner with Quiros, are set to stand trial in January on the criminal charges against them.

They each face charges of fraud and making false statements to the government in connection with the biomedical research center proposed for Newport, known as AnC Bio Vermont. Despite the developers raising over $80 million from more than 160 investors through the federal EB-5 immigrant investor program, the project never got off the ground.

Attorney Neil Taylor, who this month joined the case to represent Quiros, declined Thursday to comment on the ruling. Robert Goldstein, Kelly’s attorney, could not be reached Thursday for comment.

Brooks McArthur, the lawyer representing Stenger, said Thursday his client did not join in the motion to dismiss because he didn’t believe the communications were privileged material.

“It was not a surprising decision from my perspective,” McArthur said of the ruling by the judge to reject the requests to dismiss the charges.

Kraig LaPorte, a spokesperson for the U.S. attorney’s office in Vermont, said Thursday that federal prosecutors would have no comment on the latest ruling.

The SEC and Vermont regulators in April 2016 brought civil enforcement actions against Quiros and Stenger. Those actions accused the two developers of misusing $200 million of the more than $350 million they raised from foreign investors for the EB-5 financed projects they headed.

Both Stenger and Quiros have since reached monetary settlements in those enforcement cases. Neither man admitted or denied wrongdoing as part of the resolutions of those actions.

In the motion to dismiss the criminal charges, a lawyer for Quiros wrote that attorney David Gordon had represented Quiros from June 5, 2013, to March 25, 2017.

The SEC at the time was investigating developments, including massive upgrades at Jay Peak financed through the federal EB-5 immigrant investor program, headed by Quiros and Stenger.

Michael Goldberg, at the time of the filing of the enforcement actions in April 2016 brought by federal and state regulators against Quiros and Stenger, was appointed by a court to serve as a receiver to oversee the many assets associated with the alleged fraudulent actions.

Goldberg is still currently in that position.

The filing to dismiss the criminal case against Quiros stated that in response to a subpoena, the receiver provided information to federal prosecutors obtained from a laptop belonging to Quiros. That allowed prosecutors, according to the filing, access to about “2,000 privileged communications involving legal advice that Mr. Quiros received from Mr. Gordon.”

The filing added, “The Government inexplicably reviewed these materials without first seeking Court approval, either ex parte or otherwise, and relied on them in indicting Mr. Quiros.”

Quiros fired Gordon and other members of his legal team in March 2017. At the time of investigations by the SEC and Vermont regulators, Gordon represented all the Jay Peak entities, not only Quiros, but Stenger and Kelly as well, according to the filing.

Kelly, in his motion to dismiss the criminal charges against him, stated that the federal prosecutors also have more than 600 emails “with or about Gordon” from November 2014 to April 2016, “all of which have been extracted from Mr. Kelly’s laptop and provided to the government by the Receiver.”

A status conference in the criminal cases involving Quiros, Stenger, and Kelly, is set for July 10.