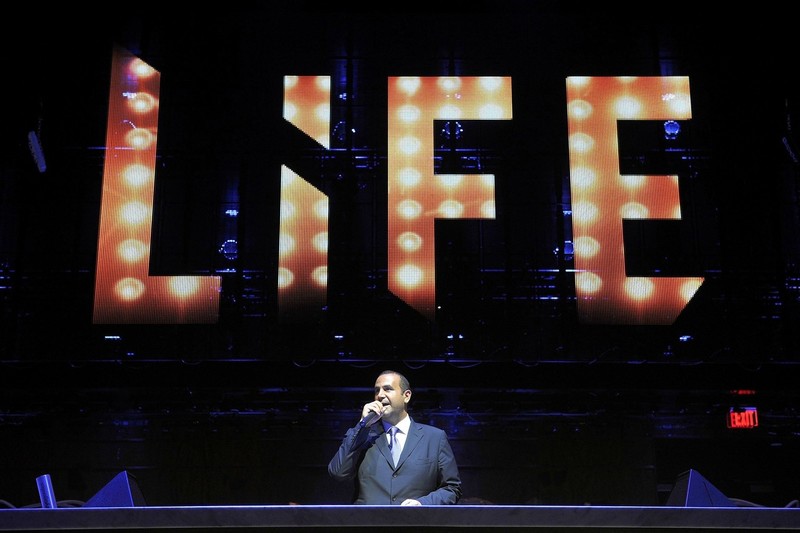 Sam Nazarian, an owner of hip nightclubs-turned hotelier, was seen as a player in Las Vegas’s future. But his past has caught up with him.

Stockbridge Capital Partners said Tuesday that Mr. Nazarian no longer would be involved in the management of the new SLS Las Vegas hotel and casino that Stockbridge controls–a decision made after Mr. Nazarian told Nevada gambling regulators he was the victim of an alleged extortion scheme and had used illegal drugs, according to the transcripts of the testimony.

Stockbridge, based in San Francisco, said it reached an agreement with Mr. Nazarian that will allow him, his family and his company, SBE Entertainment Group, to maintain its 10% ownership stake in the property, and for SBE to continue to operate the property’s nightclubs, retail spaces and restaurants.

Mr. Nazarian no longer will oversee any of those venues, and he is relinquishing all day-to-day operations at the hotel effective immediately. SLS Las Vegas’s president now reports solely to Terry Fancher, Stockbridge executive managing director.

“Following a recent hearing by members of the Nevada Gaming Control Board, we have made a collective decision to change the operating structure for the property,” Mr. Fancher said.

Mr. Nazarian said in a statement to The Wall Street Journal that “I feel my professional efforts are more productively focused on the long-term growth of SBE brands throughout North America.” His statement didn’t address the drug use or extortion allegations.

The loss of control is an abrupt reversal for Mr. Nazarian, the founder of SBE and a rising star in the hospitality world. His company has fashionable boutique hotels in Beverly Hills and Miami Beach, with new projects in the works in New York City and the Bahamas.

Mr. Nazarian has collaborated with musician Lenny Kravitz and French designer Philippe Starck on interiors for the Miami SLS, and with celebrity chef Jose Andres on the Bazaar high-end Spanish restaurant chain.

Recently, Mr. Nazarian has turned much of his attention to Las Vegas, where he looked to raise his profile with his grandest property. The 1,620-room SLS Las Vegas, a conversion of the former Sahara hotel and casino, opened in August with more rooms than all his other hotels combined.

At a time when Las Vegas gambling revenue remains below its 2007 peak, hoteliers and nightclub impresarios like Mr. Nazarian–who can attract affluent travelers with renowned DJs and star chefs–are seen as the future. City officials have been hoping the new SLS Las Vegas can help revitalize the more desolate northern end of the Strip.

Mr. Nazarian last year moved to a mansion in the hills outside Las Vegas that overlooks his new property on the Strip. He also recently moved his SBE office to Las Vegas.

Stockbridge’s move to oust Mr. Nazarian followed a hearing earlier this month before the Nevada Gaming Control Board, with which Mr. Nazarian was applying for a casino license.

During nearly four hours of testimony, Mr. Nazarian said he had been extorted into paying nearly $3 million to a group of people. He told the Nevada regulators that he had made payments over several years to convicted felon Derrick Armstrong, a Los Angeles automobile dealer. The hotelier said he met Mr. Armstrong in a “social setting” in 1999. It wasn’t clear in Mr. Nazarian’s testimony why it was he was allegedly being extorted for money.

Mr. Nazarian also acknowledged at the hearing that he used cocaine on a trip to Mexico in April. The cocaine use was during the time he was drug tested as part of the Nevada licensing process. Not all applicants are drug-tested. But the board has broad powers to investigate applicants, from reviewing bank statements to downloading computer files, and can require drug testing.

Instead of a full casino license, the board recommended a one-year limited license that would allow him to share in the property’s gambling revenue but would bar Mr. Nazarian from any decision making about the casino and would require random drug testing. If he is granted the one-year license, he can then reapply for a full license.

That recommendation goes to the Nevada Gaming Commission, which is expected to make a final ruling on Thursday. Mr. Nazarian is still pursuing a full casino license despite the recommendation that he only be granted a limited one, according to a person briefed on the matter.

Born in Iran, Mr. Nazarian at age 4 fled with his family to Los Angeles after the 1979 revolution. His father and uncle started a number of businesses and were early investors in a company that would become the semiconductor giant Qualcomm Inc., Mr. Nazarian’s lawyers said at the hearing.

Mr. Nazarian opened his first nightclub in Hollywood in 2002, then expanded to restaurants, hotels and a nightlife brand called Hyde Lounge. Other hotels owned or operated by SBE include the SLS and Redbury brands in Miami Beach and Beverly Hills.

Cain Hoy, which formed three months ago with capital from its principals and clients of Guggenheim Partners, on Dec. 2 announced a deal with SBE that includes a $167.5 million loan and warrants for up to 20% of SBE’s equity and up to $500 million to acquire or build new properties for SBE’s global expansion.

Thomas Christopoul, a senior partner at Cain Hoy, said the firm authorized “an extensive background-checking process” of Mr. Nazarian before the partnership. But it was unaware of much of the information he provided during his Nevada testimony.

“We are discussing what his disclosures mean,” Mr. Christopoul said.